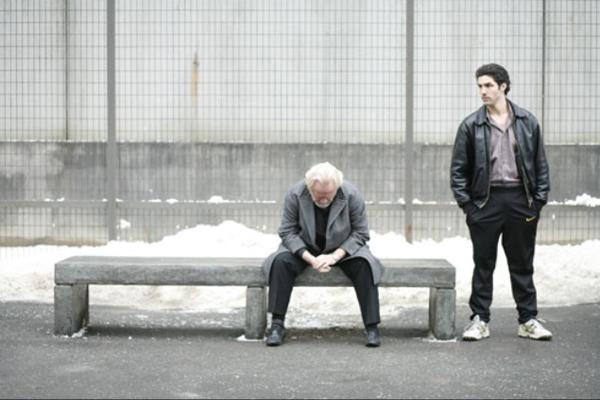 Malik El Djebena (Tahar Rahim) stands beside César Luciani (Niels Arestrup) in the yard of the French prison where they are incarcerated. Courtesy of Sony Pictures Classics.

One of my favorite movies is Jules Dassin’s 1955 French heist thriller “Rififi.” It’s not a popcorn-and-soda string of one-liners with a bank job thrown somewhere in the middle; in the French cinematic tradition, it’s a gritty, ugly look at criminal life, full of pain and piercing questions about the true value of money and the things that bring meaning to life. Most of the characters die. It’s not “Ocean’s Eleven.”

“Rififi” left a deep impression on me when I first saw it four or five years ago, so when Jacques Audiard’s “Un Prophète” (“A Prophet”), a crime movie centered on the terrors of prison life, had its premiere at Cannes last year, I immediately wanted to see it. I was hoping for a spiritual successor to “Rififi,”: the French know violence backward and forward (see, for instance, Truffaut’s “Shoot the Piano Player.”

”Un Prophete” is a vivid and graphic story of prison life and gang warfare, closer to the Brazilian “City of God” or the 2000 British movie “Sexy Beast” than to a movie like “Rififi.” Psychologically, it is a profoundly difficult movie to watch. There is a side of the human psyche we like to forget about when nestled in our high-rise office buildings and air-conditioned apartments. It is on full display here, in a French prison tenuously controlled by the Corsican Mafia, who are relentless and unforgiving in their quest to maintain power.

Malik (Tahar Rahim), a young half-Arab half-Corsican man sentenced to six years for attacking a police officer (he denies it) is introduced to his new home with beatings and is coerced into attempting murder for the sake of winning the Mafia’s “protection.”

The murder is a success, but he finds himself haunted thereafter by the ghost of Reyeb, the inmate he has killed. Malik’s troubles only grow worse, and his concessions to his environment eventually manifest as a conscience untroubled by violence or murder. We see as Malik’s hands get dirtier just how far the human animal will go to survive. Every scene, every shot, is the essence of stark and violent realism; there is very little in the way of theatrics, an emphasis on stoic acceptance of circumstance. Inmates and wardens are laconic, communicating mostly through sudden violence and brief threats. The score is sparse and haunting, like the work as a whole.

The movie is an ugly masterpiece, hard on the viewer, something like Picasso’s Guernica. Niels Arestrup, as Luciani, boss of the prison’s Corsican population, carries the movie: There really is murder in his eyes, a cold and slow-burning kind that could emerge at any moment. Audiard’s last film, “The Beat My Heart Skipped,” featured Arestrup as the main character’s father, who led a less violent but still criminal existence as a shady real estate broker. In “ Un Prophete,” he is paired with the less experienced Tahar Rahim, and at times they seem to lack a certain screen chemistry. However, both shine in the scenes where they are alone: Malik on a day leave, examining fine goods in a Marseilles shop window; Luciani in his cell, looking out forlornly with a thousand-yard stare.

Audiard’s direction does occasionally hamper the flow of the movie rather than helping it along, burdening the viewer with what feels like too much exposition. But the dialogue is utterly believable, its rendition by the actors tight, fast-paced, and compelling.

This isn’t an easy movie to watch, nor a fun one. But if you take an interest in the darker side of society, it’s a sharp, almost beautiful take on the classic crime flick, and shouldn’t be missed.

Jacques Audiard’s “Un prophète” is showing at the Lumiere Theatre, 1573 California Street, until April 22. It is in French with English subtitles.