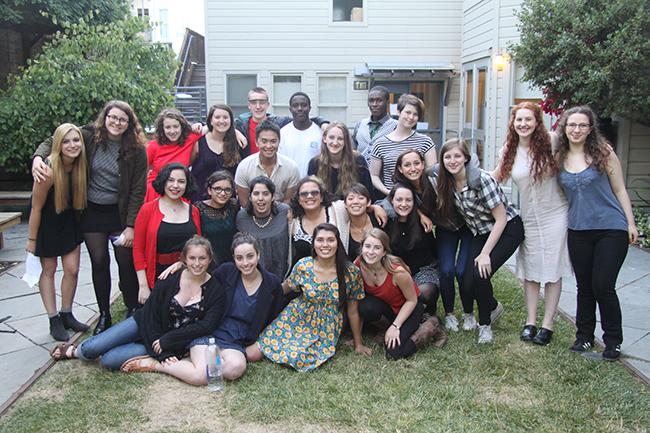 Affinity show participants and group leaders pose for the camera after vocal warmups and bonding activities.

The SWEAR Show has undergone a makeover. Until this year, SWEAR, or Students for Women’s Equality and Rights, has put on an annual spoken-word performance inspired by Eve Ensler’s “The Vagina Monologues”.

This spring, SWEAR leaders Mabel Taylor and Sophie Kovel teamed up with other affinity club leaders to put on a show that would include the perspective of all diversity-related groups on campus. The shows took place on May 15 and 16 at 7 p.m. Members of every affinity club at Urban contributed, five clubs total.

The purpose of the all-inclusive nature of the Affinity Show is to broaden the definition of diversity at Urban, making the show accessible to a wider group of people.

“I thought it would speak to a greater audience at Urban and let people who weren’t involved in affinity clubs before know that there is really a place for everyone,” said Kendall McCready (’16), a participant in the show. Urban’s affinity clubs aim to provide safe spaces for students to share their experiences and relate to one another, which the show reflected.

SWEAR, the first affinity club to have a production at Urban, is often given a large amount of representation at Urban. The original SWEAR show was inspired by “The Vagina Monologues”, an off-Broadway play by Eve Ensler that chronicled the female and feminist experience.

“There’s a lot of representation of SWEAR in Urban and the other affinity groups don’t get heard as much, so the show brought it all together into a space where you can connect over the fact that you have many, many perspectives,” said McCready.

However, not everyone at Urban resonates with these identities and ideals. The newly revamped Affinity Show diversifies the viewpoints and makes them more universally accessible.

“As a white woman, I don’t have access to these other spaces so it was really, really powerful to hear those stories and have more diverse perspectives shared to a broader audience,” said Sophie Kovel (’14), SWEAR co-leader and coordinator of the show. “I think this is just the beginning of a lot more open dialogue between affinity groups.”

Though it’s likely that Urban students will discuss the Affinity Show for months to come, that conversation might not happen at home with parents. There were no organized post-show discussions, and there was a consensus among the cast and contributors that audience members, whether parents or students, did not seem to know how to react to the often powerful and sensitive statements in the show.

Many of the cast members remarked that they received limited feedback, and that the audience seemed taken aback by the controversial nature of the subject matter despite the rampant applause.

“All in all though, we are making people think about difficult things. That’s what counts,” said Kovel.