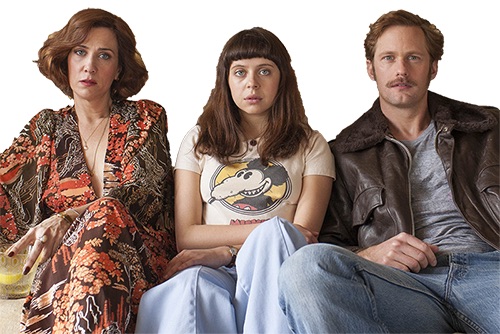 “I hate the Urban School so much … It’s an ‘alternative’ private school, a rich hippie school. In other words, I don’t belong there in any way. It’s pretty small, only 150 kids or so. I don’t like sitting on the floor instead of at a desk, I don’t like calling the teachers by their first names, and I don’t like that the kids are allowed to sit on the front steps and smoke. Call me old-fashioned, what can I say?” (Excerpt from “The Diary of a Teenage Girl.”)

“The Diary of a Teenage Girl,” written and illustrated by Urban alumna Phoebe Gloeckner, is exactly what the title suggests: a candid, blunt exposition of teenage womanhood through the lense of the 15-year-old main character, Minnie Goetze. Its format is part comic book, part diary, allowing the reader to experience Minnie’s life alongside her instead of as a spectator.

“Every single person I’ve talked to who’s around our age has said that they deeply relate to it,” said Charley Burlock (’16). “I think the themes and the way she speaks and intermingles casual details with much more deep things is something that a lot of people can relate to.”

Set in San Francisco in 1976, “The Diary of a Teenage Girl” was recently turned into a movie. It features Bel Powley as Minnie, and Kristin Wiig as her mother, Charlotte. The soundtrack and visuals are dreamy, nostalgic and true to being a teenage girl in the 1970’s. Focusing on sexuality, love, learning, and the floaty feeling of being a teenager, Gloeckner writes a story that transcends time.

“It’s not the classic high school story, but I was really happy that movies are being made that show different experiences,” said Gwen McLaughlin (’16). “Her experience seems really true to my experience … Even if not everyone could relate to it, it was cool to see something different.”

The book is even more relatable than the movie as Gloeckner refers to Urban explicitly throughout the story. She describes her teachers, classmates, skipping school, and eventually being asked to leave. Minnie lives on Clay street and is always exploring the sights of San Francisco.

One of the main themes of “The Diary of a Teenage Girl” is Minnie’s newfound sex life.

“I really like how it dealt with how confusing it is to be a sexual human when you’re a teenager because you’re not fully formed in your body or in your mind,” said McLaughlin.

However, her obsession with sex is not an innocent excitement. Minnie describes losing her virginity and having a complicated affair with her mother’s 35-year-old boyfriend, Monroe. She has healthy sexual relationships with high-school boys as well, but her relationship with Monroe is one of the main focuses of both the book and the movie.

“It was disturbing,” said McLaughlin. “Older guys who want to date 15 year olds maybe have issues.”

“The Diary of a Teenage Girl” is the type of story that changes the way you feel about yourself and your life.

“After watching ‘The Diary of a Teenage Girl,’ I just did a lot of thinking about what it means to be a teenager and I realized that there is no right way to live your teenage years,” said Jenny Asaaf (’16). “Whatever you’re doing is right because you’re living it. If you make a lot of mistakes, that’s the point of being a teenager because you’re setting yourself up for a better future … So really, the best thing you can be doing right now is f*cking up. Just keep messing up and that’s great.”