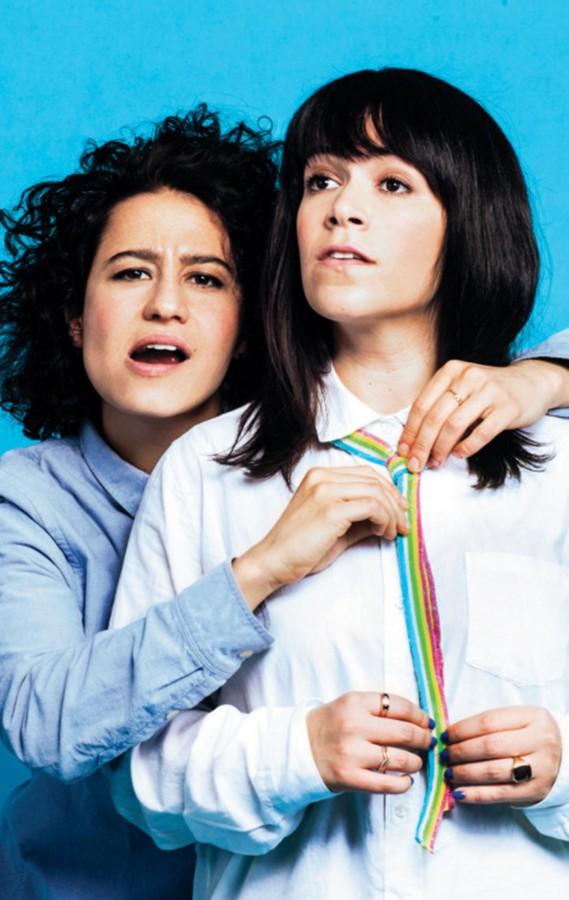 Have you ever cleaned a stranger’s house semi-naked to make enough money to buy Lil Wayne concert tickets, only to find out that the grown man you just cleaned for lives his life as a baby? This is how the Comedy Central show Broad City begins.

“Broad City can be messy and random but that’s what makes it distinct,” said Mariel Solomon (‘17). “I can always tell that Abbi and Ilana are just embracing who they are and give no f*cks about what the public thinks.”

First airing on January 22, 2014, Broad City covers the millennial high jinks of two women in New York City. The main characters are loosely based on the co-writers and co-stars Ilana Wexler and Abbi Jacobson. 23-year-old Ilana Wexler is a hedonistic, rowdy stoner and 26-year-old Abbi Abrams is a go-with-the-flow, self-deprecating employee at Solstice (a spin-off of SoulCycle). Together, the symbiosis of their characters create a relatable and hilarious storyline.

“I think Broad City offers a new way for young adults to view their own life,” said Gwen McLaughlin (‘16). “I think a lot of out of college people are kind of a mess and don’t exactly know what they’re doing, but they’re not laughing about it – they’re freaking out because they’re trying to be adults. Broad City shows people a way to laugh at that messy confusion.”

The show began humbly as a YouTube series with the same name, which was first produced in 2009. Two years later, the webshow was discovered by Saturday Night Live’s Amy Poehler, who is now one of Broad City’s executive producers. Like Poehler, Wexler and Jacobson are frontrunners in the ever-growing spotlight on women in comedy.

“I like Broad City because there are a lot of restraints for what women in comedy have to be, but Broad City breaks a lot of those rules,” said McLaughlin. “Usually, women are pretty sexualized and cute or self-deprecating, which Ilana and Abbi definitely play into sometimes, but they just feel like more real people. Mindy (Kaling’s character in The Mindy Project) and Amy (Poehler’s character in Parks and Recreation) feel a lot less real.”

“(Broad City) has such a way of growing on you that I have never experienced with any other show. It has made me so insanely happy, it’s hard to describe,” wrote Crosby Tatham (‘19) in an email to the Legend. “I can forget about the world for 20 minutes because I get so invested in (Abbi and Ilana) and their crazy journeys and vagina pockets and the ways that they are independent, money-making women.”

On February 17, season three premiered with a whirlwind of new shenanigans and social commentaries. Each scene contains enough content to fill an entire episode. Ilana and Abbi transition rapidly, yet smoothly, from one idea to the next, adding to the chaotic nature of Broad City. Ilana, wearing a baseball hat reading “PERV” across the front, loses her bike key and is stuck with a huge 12 pound chain around her torso. Over brunch, she discusses the marital oppression of Saudi women with Abbi in one breath, and becomes aghast over the lack of bottomless mimosas in the next breath.

“Part of what makes Broad City different from other shows in the genre is that the social commentary isn’t always glaringly obvious,” said Kendall McCready (‘16). “For example, in one episode, Ilana assumes that a black woman is help at a fancy event. The episode isn’t about that specific interaction, and it doesn’t dwell on it. Instead, it quickly moves on. Even though Ilana is clearly making an assumption about this woman based on her race, the casualty and quickness of the remark makes the scene more realistic, and subsequently more relatable. “