Urban students showcase their work in the Winter Art Show 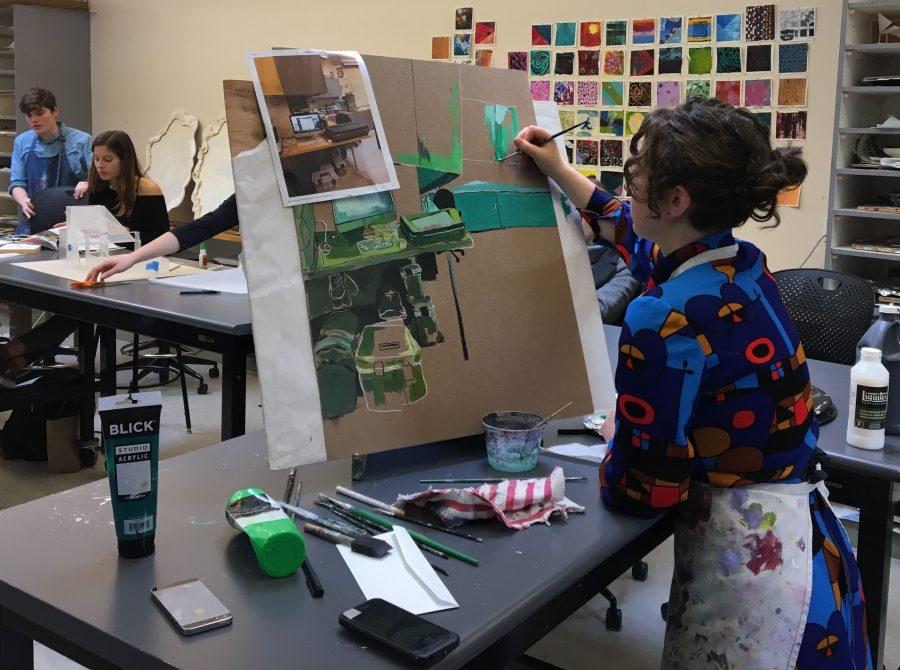 On Friday, February 17th, a group of 13 Urban School seniors will present an artistic body of work in the annual Winter Art Show. These students create the show over the course of the winter trimester. Each artist has that time to explore a medium of their choosing, in hopes to “push into their own creative edge,” according to the class description on the Urban School website. Each artist interviewed below has taken a unique approach to the show. These artists are only a portion of the show, as not all students responded to the interview request.

What is your medium?

Emmy Hicks-Jablons: “I took photography last year, and I was experimenting with film photography, and especially alternative ways of developing photos, like printing in the sunlight, and chlorophyll prints, which was really fun.”

Madeleine Matz: “I’m drawing on top of paintings. It will make more sense when you see it. I chose it because I originally wanted to paint, but I don’t really have the abilities that I wanted to use. I’m much more trained in drawing, so I ended up using that.”

What is your concept? How did you come to choose that?

Hicks-Jablons: “In terms of the winter art show, I am focusing on Tomales Bay, which is a place that has meaning to me, so that’s mostly where the inspiration comes from, landscape photography in that environment… I found that the process of film photography appealing to me in that each photo has more value. I like the look of it too, the grain and how it looks different.”

Zhang: “I was looking at romantic paintings in the renaissance period, and they were all trying to romanticize the idea of nature, and trying to bring this aspect of realness into their paintings, and I was like, instead of painting [an object], why don’t I just put it on there?”

Armstrong: “I have lived in four different cities throughout my 17 years. Each city has a completely different meaning to me,  and they’re super important to me,  and I’ve always been into painting.  So I kind of wanted to combine the skyline of cities.  I normally paint figures of people so I wanted to mix it up and do landscapes. So I’m combining all of the skylines of the cities into one skyline on a big canvas, and I’m doing a city at night with the skyline, and I’m doing LEDs so it’s backlit.”

Matz: “I’m doing fairly large images and snapshots of everyday situations, either of people or objects. There will be four big pieces and some smaller ones.  I think it’s a reflection on the daily life that I’ll be leaving when I go to college, and things that are really temporary and not particularly important but still feel relevant, and sort of essential to my experiences here. I’m also using images of technology in a lot of them, like people on their phones… [The art is] really indicative of how people interact with their surroundings and people around them with how they interact with technology.”

Solomon: “I’m just thinking about the idea of structure versus fluidity. I really like wax because it’s a constantly evolving medium,  and you can melt it into one shape but it will always be able to transform. versus wood which once you cut it, you can nail it back together but it will never come together again.  and these crystals are very rigid, and the kind of inclose it and limit what it can do.  so I’m just trying to juxtapose those two forces. I think about that a lot in writing, like in the fall when I was in American Romanticism,  in the way that when you express an idea in any medium you have to structure it, like when you’re writing an essay you have to put it into a format,  and it limits the way that you’re thinking about it and your head. some part of it will be constrained or cut out.  So I’m trying to express that in artwork, which also has restraints.”

Galley: “My focus is on neon light, and I’m trying to illustrate light through movement. I started by photographing neon lights, and I did that before the project. I really like how they look at night. I really like how in a storm, when there’s like one neon light that’s red, whole storm becomes red.  I think that’s the coolest lighting ever.”

Will you be pursuing art in the future?

Hicks-Jablons: “I think that photography is something I’ll always be doing.”

Zhang: “In college, I’ll probably do art. I might take a class, and I know I’ll continue drawing in my sketchbook or whatnot.”

Matz: “I definitely want to take art classes in college. I don’t think I’ll major in it,  but perhaps minor, and definitely take a lot of classes.”

Solomon: “Yes, hopefully. I don’t think I’m going to go to art school because I don’t want to sacrifice everything else that I also appreciate, but I’m looking at liberal arts colleges…  And I’m hoping to at least have a double major with art, or a minor with arts, so I keep practicing and having art mentors in my life like I do now.”

Galley: “Hopefully graphic design is going to be my career path. That’s what I want to do.  So I  have to get my portfolio together and [the winter art show] is a part of that.”

Interviews have been shortened for length and clarity.

For more information on the Winter Art Show 2017, visit http://www.urbanschool.org/news