Inside the 2019 Winter Art Show 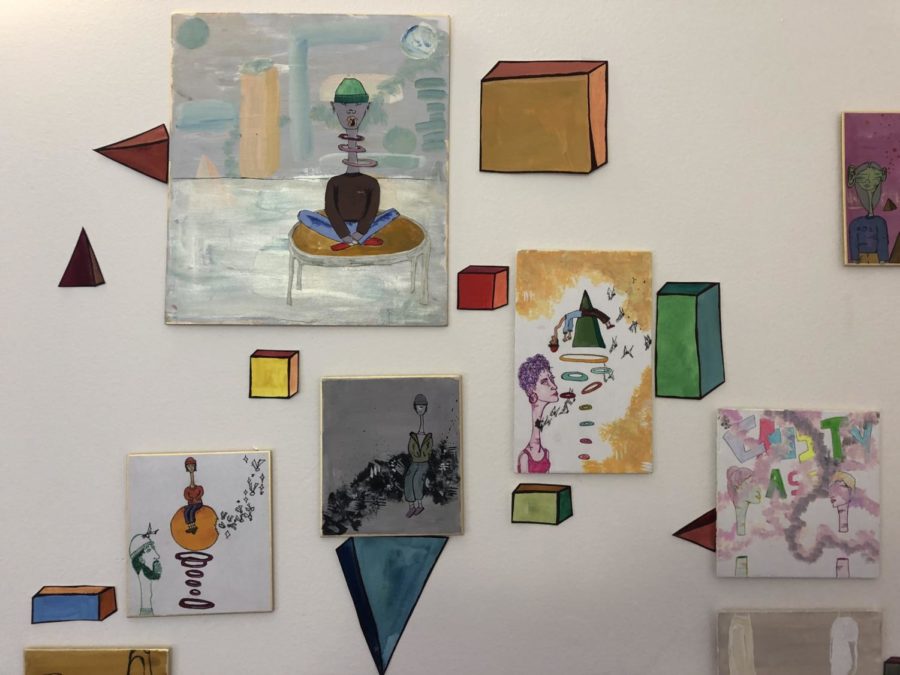 On Thursday, Feb. 14, 18 dedicated Urban artists will gather in the Page Street building to present their installations which have been weeks in the making as a part of the Winter Art Show. The Winter Art Show class runs annually during Winter term, providing Seniors with an “opportunity to deepen an artistic practice” and investigate a medium of their choice, according to the course description on the Urban School website. Students are expected to “push into their own creative edge”, which encompasses the demanding and inventive class in which each student transforms their art into a final project that they share at the end of the term in the show.

The term begins with small projects, called 10x10s, in order to help students to flesh out their ideas. The students are each given a 10×10 piece of paper to create a piece of their choice, some of which are displayed in the final show, while some others simply help the artists to decide what mediums and ideas they are interested in working with. Right before winter break, students begin to transition their ideas into a final project idea, which they work on for Weeks Five through Ten of the term with assistance from the visual arts teachers and occasional critique sessions from their classmates.

See what five of this year’s artists have been up to in the weeks leading up to the show in the interviews below.

Week 6: The students are currently working on establishing their plans for their installations for the final show. They are finalizing their ideas and beginning their final pieces.

Aisha Catena Foster
Week 6: What is your medium? What are you thinking about putting together for the Winter Art Show? My medium is drawing and painting, using pencil, pen, and ink. I’m still not sure what I’m planning on making, but basically a bunch of little painting things that will work together as a whole.

Week 9: What have you been working on the past three weeks? What is your official plan for the show? I kinda knew what I wanted to do for a while, so I just have been working on that and trying to make as many pieces as possible. Some of them work and some of them don’t, but I just try to make as many as possible and then once I’m done or getting close to the show date, I’ll take out the ones I don’t like. Everyone is pretty stressed out right now… most people have finalized what they’re gonna make and what their spot is in the school.

What obstacles have you encountered and how have you moved past them? Personally, I wasn’t that confident about what I was doing and so I didn’t really have any strong ideas or I didn’t know what style I wanted to use, so that was definitely hard at first. And also, because I’m making so many little drawings I sometimes run out of ideas…but I’ll do little drawings while I’m out or in other classes if an idea comes to me.

Where is her art? The corner on the fourth floor by the middle staircase that leads into the library

Ryan Barnett
Week 6: What is your medium? What are you thinking about putting together for the Winter Art Show? I’m doing video production and photography. I’m interviewing my mom about her earliest memories and then I’m going to try and film them.

Where is his art? In the Farallon room which is in the Old Library.

Hannah Schrank
Week 6: What is your medium? What are you thinking about putting together for the Winter Art Show? I’m doing a painting and illustration piece about memories. I’m using Dura-Lar which is this thin plastic material, and I’m going to put it up against a window like it’s stained glass.

Week 9: What have you been working on the past three weeks? What is your official plan for the show? My plan earlier was to do a lot of small individual pieces, but since then, after talking to Kate and Jen and kind of interactively with other teachers, I’ve now decided to do one really big piece. So now instead of doing those smaller pieces, I’m working on a piece that’s like 9 feet wide by 4 feet. Same idea regarding memory and using those smaller illustrations so that it’s a little bit of a collage just on a bigger scale.

What obstacles have you encountered and how have you moved past them? I think time has been a big obstacle for me, honestly. I’m also in painting right now, and I’ve been working on the Winter Art Show in that, so I have double the time that everyone else does. I think that freedom has made it harder for me to want to push myself… I mean, I started my final piece last Monday. So now, after I’ve had so much time, I’m kind of in a crunch and I have to grind, which has been difficult.

Where is her art? The window/ledge area on the fourth floor between Velocity Lab and Aerie

Tara Kamali
Week 6: What is your medium? What are you thinking about putting together for the Winter Art Show? I’m gonna mix 3D textures and stuff with printed figures using Adobe Illustrator to create a big collage.

Where is her art? Wall outside of east stairwell on fourth floor next to Aerie

Ryu Tada
Week 6: What is your medium? What are you thinking about putting together for the Winter Art Show? I’m designing posters and clothing for a kind of fashion show.

Where is his art? Corner next to Independence on 3rd floor