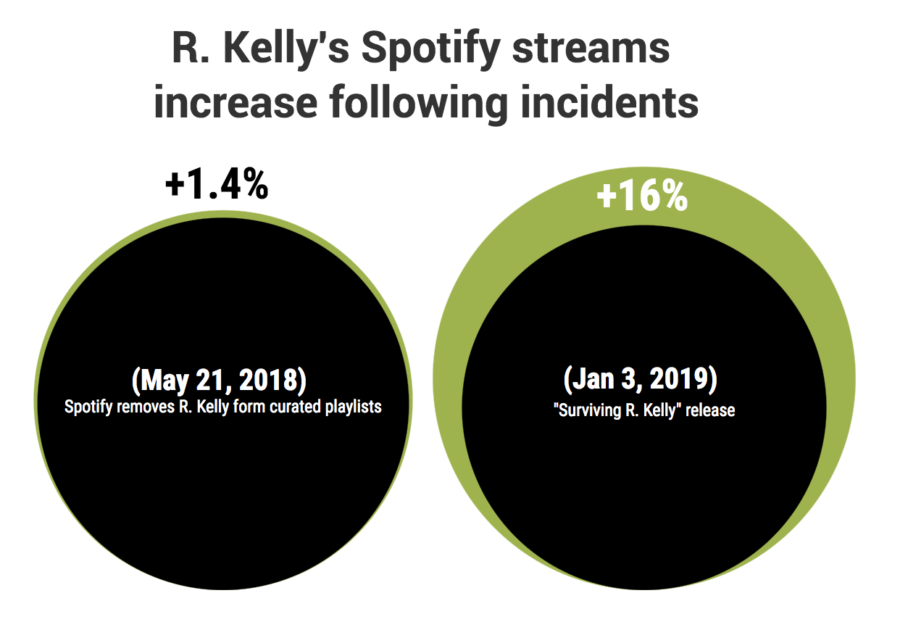 From Michael Jackson to Chris Brown, some of the most influential performers of recent decades have been linked to accusations of sexual assault and domestic abuse. In many cases in the past, off-stage controversies have shattered artists’ reputations and significantly diminished their popularity. More recently, however, similar scandals have instead provided some artists with a lucrative boost in relevance and media presence.

This January, Yudi Feng ‘20 hosted a forum called Cancel Culture, one of many discussion-based forums hosted by Urban’s multicultural understanding group during Urban’s annual Month of Understanding. The Cancel Culture forum discussed instances when people felt the need to withdraw their support of certain artists due to their actions offstage. The forum posed a question regarding the divide—or lack thereof—between an artist’s actions in real life and their music: can you separate the art from the artist?

The question has become increasingly relevant in recent months, with sexual assault allegations against R. Kelly reentering the media spotlight. On Jan. 3, Lifetime Movies released a six-part documentary called “Surviving R. Kelly,” which detailed several accusations of sexual assault against the R&B singer dating back to 1994, when he married then fifteen-year-old Aaliah Haughton. Kelly was accused of engaging in sexual intercourse with underaged women numerous times in the following years.

The documentary gained viral traction which was fueled by a twitter community with the hashtag #MuteRKelly. Kelly was dropped by his production agency on Jan. 18, and artists such as Chance the Rapper and Lady Gaga have since apologized for collaborating with him.

Ultimately, these denunciations of Kelly have done little to reduce Kelly’s musical following, and the campaign to “Mute R. Kelly” has had the opposite effect. Despite widespread criticism, popular news source The Blast reported that Kelly’s Spotify streams increased by 16% in the week following the release of “Surviving R. Kelly.”

Kelly is not the first artist to demonstrate inflated success after receiving accusations of sexual misconduct. Rapper Tekashi 6ix9ine, for instance, was accused of pedophilia in 2017 and is currently incarcerated for charges of racketeering. Even in the wake of these controversies, 6ix9ine’s 2018 album “Dummy Boy” reached second on the U.S. top charts.

In fact, artists and record labels have begun to capitalize on the upside of negative press. Inzei Records, the record label responsible for the viral fame of rapper Lil Pump—who has been arrested for driving without a license and discharging a firearm—used the adage “all publicity is good publicity” to their advantage. According to digital media company Genius, Inzei Records purposefully publicized Pump’s legal issues and feuds with other rappers to increase his online presence. Genius also reported that similar “controversy projects” were used to increase the popularity of rappers XXXTentacion and Tekashi 6ix9ine.

Feng has noticed similar instances when negative publicity has been used to promote an artist’s music. “I have this conspiracy theory that every time Kanye does something really controversial, an album comes out. If you’re in the center of publicity and you drop an album, everyone’s gonna listen to it,” Feng said.

While they may lead to increased popularity for musical artists such as Kelly and 6ix9ine, sexual assault allegations against members of the film industry have had more significantly negative effects on their careers. In fact, these allegations have virtually exiled certain actors and producers from the film industry, and campaigns such as the #MeToo movement have proven the power of negative publicity in rendering former celebrities—such as Harvey Weinstein—irrelevant or “canceled.”

This industry-based disparity in the impact these allegations have may stem from some of the fundamental differences between film and music. “With actors, it’s really hard to separate them from their art because you’re seeing them. With music, it’s not like you’re having a face-to-face interaction with the artist,” Feng said.

Streaming platforms further accentuate the disconnect between listeners and artists. On services like Spotify and Soundcloud, “you no longer have to pay five dollars for an album and feel like you’re giving money to support the artist.” Instead, listeners are simply “paying $7.99 a month for Spotify without having to think about spending money specifically on one artist,” Feng said.

For streaming platforms that do not wish to endorse musicians like Kelly, claims of censorship have prevented significant action from being taken. In May 2018, preceding the release of “Surviving R Kelly,” Spotify’s executives removed Kelly’s songs from the platform’s officially curated playlists. Kelly’s music was not removed from Spotify outright, however, and—like in the aftermath of “Surviving R Kelly”—Kelly’s streaming totals increased as a result, according to music news source The Verge. The deletion was part of Spotify’s temporary hateful conduct policy, but issues regarding censorship led Spotify to quickly add Kelly’s songs back to playlists.

Because music platforms have been unable to remove controversial artists’ music without objection from consumers, efforts to boycott artists like Kelly have consistently failed to translate into a legitimate reduction in the artist’s streams.

Spotify is currently developing an option for users to “mute” any artist of a listener’s choosing. When an artist is muted, their songs will automatically be skipped unless they are manually selected to play. The feature will allow every Spotify user to mute R Kelly if they so choose. But if listeners find that they are, in fact, able to separate the art from the artist—as they have in the instances of XXXTentacion, 6ix9ine, and Kelly himself—Kelly’s music will continue to play.