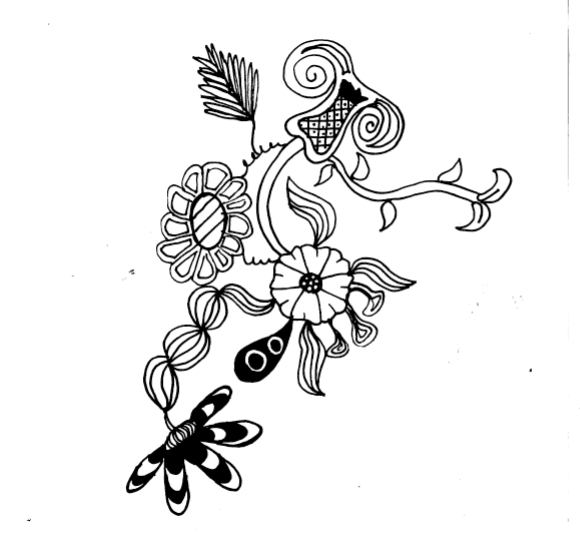 Once mainly popular among prisoners, homemade “stick and poke” tattoos have become mainstream—especially among teenagers. The method of tattooing is simple enough for people to do at home on themselves and others. A homemade stick and poke tattoo, otherwise known as a DIY tattoo, involves only a needle and ink and is done simply by poking into the skin along with the pattern of the intended tattoo.

An anonymous Urban student who has a self-done tattoo told the Legend their story: “A friend and I did it on the bathroom floor in the student center bathroom during a fifteen-minute break in between classes. We had a bottle of rubbing alcohol, some tattoo ink, and a sewing needle.” They said they “sterilized the needle by dumping the rubbing alcohol over it and burning the tip with a lighter. They added, “it turned out fine, but looking back it was so dumb [because it was so unsanitary].” Many Urban students have homemade tattoos and similar stories to this student, in which they gave themselves and their friends tattoos in unsanitary conditions.

These kinds of homemade tattoos are appealing to people, especially teenagers, because of their accessibility and price. While a tattoo in a professional parlor typically costs at least $50, homemade tattoos can be done with just a sewing needle and a bottle of tattoo ink available on Amazon for less than $10, or even the ink from a ballpoint pen.

They also have the reputation of being less permanent than professional tattoos. Though they are supposed to last forever, they often fade when placed on the hands, fingers, or other places that are often exposed to the sun. However, stick and poke tattoos come with a long list of potential health ramifications.

Science teacher Mary Murphy, who teaches Infectious Disease at Urban, explained that because “skin is a major protective barrier, anytime that’s breached, it is possible for an infectious agent to get in.” She explained that with intravenous drug use, for instance, “depending on how deep you go [with the needle], what can happen is that blood from the first user is on the needle and then the second user injects both the drug and [the other person’s blood]” into their body. Murphy said that this leads to the spread of bloodborne diseases such as HIV and Hepatitis B. “Without a sterile syringe, if there’s sharing going on, that transmission can happen.” Murphy says.

The same thing can happen with stick and pokes, especially to amateurs who do not sterilize the needle correctly.

Tattoo artist Perry Doig, who works at Rose Gold’s Tattoo and Piercing, said “there are so many different processes to ensure that someone gets a safe and successful aseptic tattoo, and it doesn’t just come down to using something that is ‘sterile’. With tattooing, we don’t reuse anything… we just use disposable items that will never be used on anyone else.”

Major factors in ensuring that the tattoo is aseptic include making sure the environment is sterile, is prepped correctly,  and that everything is thrown away after it is used. Doig said, “we do multiple glove changes throughout a procedure” and “if any of those steps are breached, the entire tattoo is compromised. Any one drop of contaminated material spreads like a wildfire throughout a studio. To try and do a procedure like that on your own without years and years of practice, you are going to make some seriously catastrophic errors.”

Doig believes that a major driving factor in homemade tattoos is the culture surrounding body art. He said, “Humans have been drawn to adorning their bodies for millennia. There’s absolutely no issue with wanting to change the way you look. But when we’re talking about blood, and bloodborne pathogens like Hepatitis, Herpes, and HIV, then the ramifications are pretty crazy.”

Because the consequences can be so great, it is important that Urban students take the necessary precautions to keep their bodies free of diseases and pathogens transmitted by non-sterile procedures. The safest way to avoid these kinds of infections is to get it done by a professional in a tattoo parlor. Doig said, “we’re in a time now where we all have access to places that have taken precautions and can offer you those services without a major chance of having issues.”