Behind the Scenes: ‘Matilda”s Process 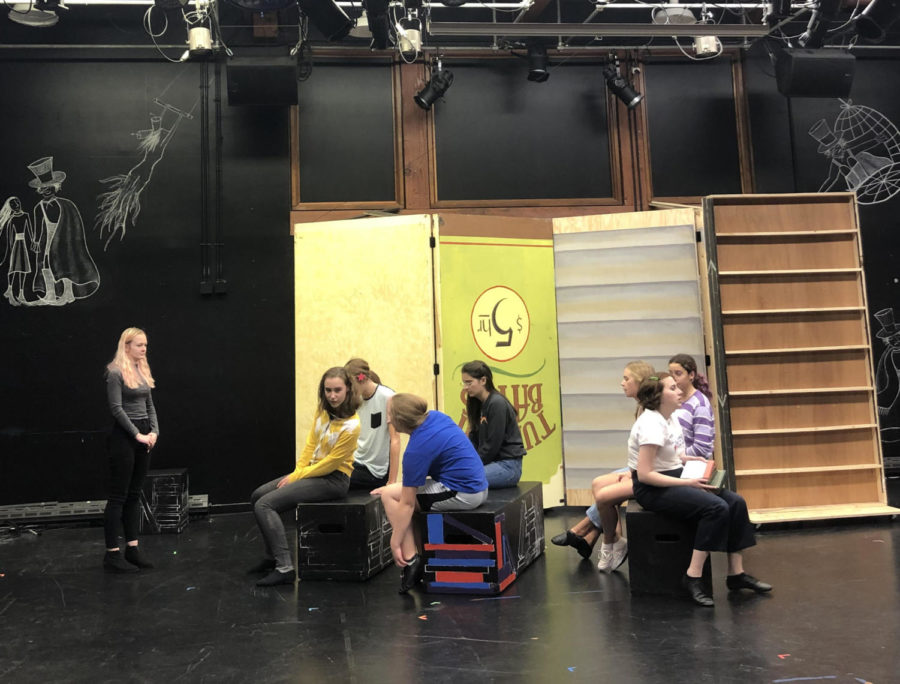 This year members of Advanced Theater have plunged into action as they prepared to perform Urban’s Fall Production, “Matilda”. While the audience is presented with a final product, much goes unknown and unrecognized during the preparation of a production like this one.
As student-led One Acts come to a close in the spring, theater director John Warren and choral director Brooke Steele shift their focus to the Fall Production. Urban’s musical is one of the more complex theatrical works students put together over the course of the year. With five separate pieces, vocals, orchestra, choreography, staging, and technical design, that all need to come together by Week 11, the cast must stick to a strict schedule.
The Musical “Matilda” is an adaptation of the original book written by Roald Dahl. Urban’s take captures the magic powers and whimsical moments of a young girl as she moves about a world and family that she doesn’t seem to fit into. Matilda finds ways to utilize her special powers to bring joy to herself and those around her.
Despite the fact that many of the participating students have a history of theatrical performance, the Gumption stage is open to anyone who has taken Urban Singers or Acting 1. Once students enroll in the Advanced Theater course, directors take into consideration what show the Urban community would enjoy as well as “the constraints of the cast,” said Molly Bradley, ‘20, such as types of voices and numbers of students. The show is selected over the summer giving Warren and Steele time to obtain the rights to produce “Matilda” and notify the cast.
Because of Urban’s short trimesters, auditions fall on Friday of the first week of school and the following Monday of Week 2. With three separate auditions, one for singing, one for dancing and the other for acting, actors are allowed to try out for multiple roles. The cast list is posted the Tuesday after auditions, giving actors time to work individually and collectively with Steele on vocals and music, Warren on staging and blocking, and with Kim Saunders, choreographer, on dance numbers.
While performers are provided time to rehearse together during their Advanced Theater Class, actors often set personal time aside to memorize lines. “I take time to memorize my lines when I’m finished with my homework…my parents help me run lines, I tell them to be as harsh as possible…until I get it right,” said Maddie Thorpe, ‘22, who plays Matilda in this year’s production.
One of the ways actors best express themselves and add their own creativity during production is through what they bring to their character. “I feel like I learn more about myself from being a different character… and if your character is really different, it’s fun to explore that side and be someone you wouldn’t normally be,” said Orrie Rindal ‘22.

Although actors hold most of the spotlight, the musicians play an essential role in completing the musical. The orchestra is composed of Urban musicians, typically those who have participated in Jazz Band. With only six students in total and the closeness of the band, Xander Nonaka, ‘22, trumpet two, said joining the orchestra, “[was] very casual.” Like actors, musicians audition for a spot in the ensemble. Steele leads both the vocals and conducts the orchestra. The orchestra additionally offers an opportunity for musicians like Nonaka to try something new. He also said, “I’m fortunate enough to be able to play with people who are very passionate and very talented [about music].”
With a cast of 15, there’s plenty of room for students in Advanced Theater to take on additional roles. These roles like Costume Designer, Sound Designer, Illustrator, and Dance Captain allow student voices to be heard in addition to what they bring to their characters. “I got to sit by Kim…give some notes for a couple of the routines…and if pretty much anyone has ideas she’ll take them and consider them…which I think is really cool,” said Audrey Douglas ‘22, Dance Captain.
As the term progresses, individual parts begin to merge together. Vocals and choreography come together around Week 5, while singers and the orchestra begin collaborating during Week 10. Week 10 is also known as ‘Tech Week’, where the focus is on the sound and design aspects of the show. Erin Gibb, the Tech Director, is in charge of work calls and making sure sets are built. In addition to the work of both a professional Lighting Designer, Kevin Landesman, and Scenic Designer, Stewart Lyle, actors are required to complete at least four hours of tech where they help build props and sets.
As Week 11 approaches, actors begin running through the entire show, off-book. Thorpe said, “I’m very excited and curious to see how it all goes…[and] to see how things flow together and how the whole story builds.” The cast hosts a free preview the Tuesday of Week 11 right after school. Opening day is the following day, November 13, which is also in the afternoon, and from November 14-16 actors put on night shows at 7 pm.
The process of putting on a production is quite a challenging one, Bradley said, but “by some magic everything comes together…it’s never supposed to be smooth because everything has to develop on its own.”