SF high schools alter schedules and curriculums due to COVID-19 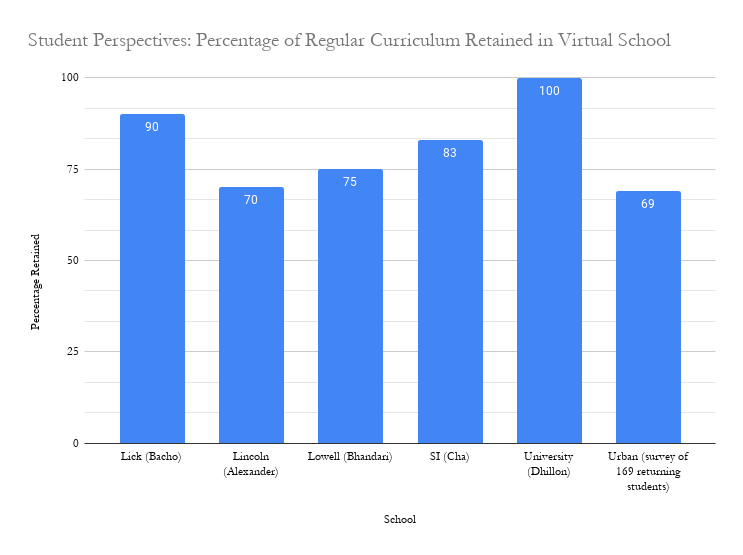 Instead of returning to the classroom for a new school year this fall, students across the Bay Area have found themselves learning from their homes. This new reality of Virtual School brings an added twist of altered schedules and curriculums, forcing schools throughout San Francisco to modify and redesign their original curriculums.

Geoff Ruth, assistant head for instruction, said that Urban has been forced to reduce the amount of material covered virtually. While there were 4.5 hours per class each week during in-person school, Virtual Urban slots only 3.25 hours weekly per block class, forcing teachers to adapt their curriculums. “Teachers in all departments,” Ruth said, “have been very thoughtful, deliberate, and collaborative in figuring out what…is most important to prioritize,” due to each subject’s shorter class time.

Urban students have also noticed their curriculums appear lighter, resulting in less strenuous classes. “It’s definitely easier,” Joshua Jue ‘22 said, “a lot easier!” In addition to having a lighter load of work, Jue thinks that teachers are grading easier, particularly for writing assignments. He speculates that easier grading is due to the difficulties of participating virtually.

Urban is not the only school that has shifted to a distance learning model. Until the city allows high schools to open in-person, all schools in San Francisco will be holding classes remotely. Lick-Wilmerding, for example, has adapted by moving to a quarter system for the 2020-21 school year. They have also lowered the average class size from 17 to 12 in hopes of returning to in-person school with reduced capacity. However, their new schedule does not appeal to all students, as Lucie Bacho, Lick ‘22, said “it has not been that fun … I think a lot of people are going to be giving [the administration] some feedback.”

Similarly, University High School has switched from a semester to quarter system where students are taking half the number of classes as usual at a given point. However, students’ amount of work has not changed as each class is moving twice as fast. Ria Dhillon, University ‘22, said Virtual University is “definitely harder academically,” as she thinks they’re not cutting parts of the curriculum on account of the quarter system. Additionally, Dhillon said that the tests she has now are more about synthesizing information than material based, so even with all open-note tests, “you have to actually understand the material.”

Unlike Lick and University, St. Ignatius College Preparatory continues to have 7 block classes. Abby Cha, SI ‘22, said each class is still structured, as the teacher will “teach us a lesson and they’ll give us an activity” to complete in breakout rooms. Overall, Cha finds Virtual SI easier than when she had school in-person, though largely due to not having so many distractions in the school building.

While private and parochial schools have considerable freedom in deciding how much instruction students receive while operating remotely, public schools have strict guidelines on work time, dictated by the San Francisco Unified School District. SFUSD requires that high school students have a minimum of four hours of work per day, though this can include a combination of live instruction, homework, independent work and tests.

While holding classes remotely, Lowell has decided that no class will exceed 35 minutes and that students can take a maximum of 7 classes. Maya Bhandari, Lowell ‘22, said “it’s easier for me [academically] just because they can’t assign as much work” due to the extremely short class periods. Additionally, a substantial amount of her work is now independent.

Similarly, Xara Alexander, Lincoln ‘22, said her work is also very independent now that learning is all remote. Although Lincoln, a public school, has chosen not to limit class periods to 35 minutes, the time students have in class has been significantly reduced. Alexander also said that teachers are grading notably easier, to the point where she has seen people turn in assignments six days late and still receive full credit.

While Virtual School presents many new obstacles, students from independent, parochial, and public schools feel that their teachers are working hard to support them through this challenging time. “Everyone on the support side of things,” Ruth said, “have been working their butts off trying to support students.” 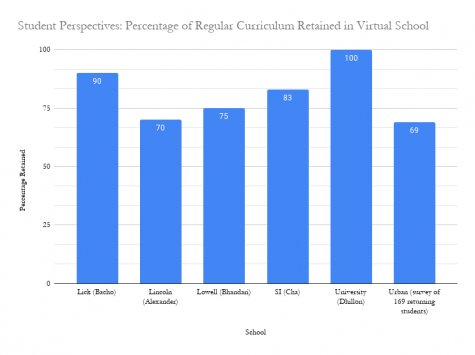