The Urban Legend has long been a staple of the school and is a valuable student-driven vehicle of expression and information sharing. However, on distribution day, a pattern has surfaced time and time again — Urban recycling bins brim with discarded papers mere minutes after their delivery. So, do people actually read the Urban Legend?
To investigate, the Legend conducted a schoolwide survey gauging its readership. Of the 124 responses, 12.1% said they never read the Legend when it comes out. Conversely, a whopping 37.9% of students read every single edition. The remaining 50% claim to read it a few times per year, but not every news cycle. Based on the survey results, an impressive 87.9% of Urban students read the Legend to some extent.
According to the survey, Urban students turn to the Legend for a number of reasons, from having nothing better to do during a study hall to hearing hot takes from the Legend staff. Non-readers cited everything from misinformation to the chemical smell of newspapers as reasons for failing to engage with the Legend.
Lily Faucett ‘24 says she sometimes reads the Legend. “I like to stay updated on what’s happening around school,” she said. 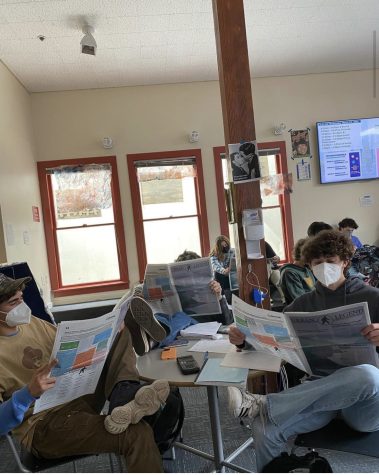 “I read whatever articles interest me from the title,” Ciara Howard ‘24 said, “[but I prefer articles] about the kids at school or the teachers or people that I know.”
Bryce Yang ‘22 is an occasional reader. “I usually don’t read [it], but sometimes when there’s a controversial article or an article a lot of students are drawn to for any reason, then I might take a look,” he said. “If a lot of students are talking about it, if there’s general anger, or… if a bunch of my friends or students think an article is especially funny, I read it.”
Unlike Yang, there exist individuals at Urban who turn a blind eye to the delivery of the Legend. Sam Ball ‘22 is one of those people. “I don’t really like reading papers in general. I hear my friends talk about it but I never end up reading it,” he said. “It’s nothing specific about the Urban Legend itself, it’s just papers in general. I’m not a fan of the news, or reading the news in paper form.”
Michael Schaezlein ‘22 does not read the paper. “I look at the pictures sometimes, but I don’t read [the paper],” said Schaezlein. “I don’t really like reading things that much, so when [the Legend staff] give me the paper and tell me to read it, I’m like, ‘No.’”
Schaezlein notes that his lack of desire for reading articles is, in fact, not related to the credibility or content of the paper. “It’s more of a me problem,” he said. “I mean, I don’t really know what’s in the paper. Sometimes it has some fun pictures, like when [The Legend] had the cookies [recipes]. Those were fun to look at. But I don’t know what the words are about.”
Nonetheless, the readership of The Legend remains strong and the general consensus is that people read the Legend to educate themselves on Urban and the world, as well as connect with their peers. “I like reading articles that are specific to Urban,” said an anonymous survey respondent.
Another anonymous source added to this, saying, “[the Legend] usually contains interesting things, and I know a lot of people put good work into it.”