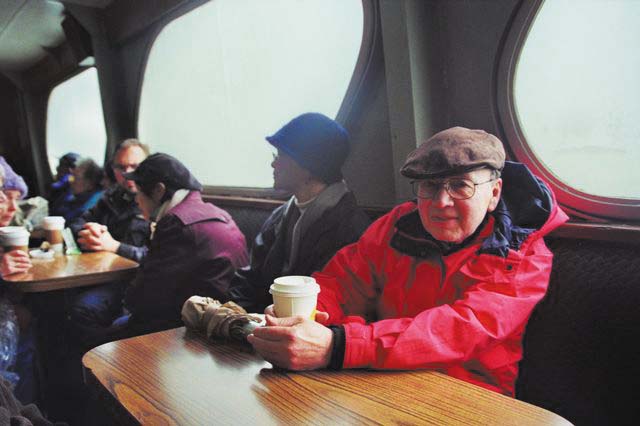 It is Feb. 15, a blustery and rainy day in the Bay Area and also the long-anticipated re-opening of historic Angel Island.

The weather certainly does not reflect the momentous event. The ferry rocks across the bay, and the water is rough and angry, soaring over the sides and splashing everyone on board. The wind is screaming through the three decks of the ship. Despite the stormy weather, everyone on the boat seems cheery. The excitement onboard is palpable, and a bubbly, expectant chatter has settled over all.

Debbie Lee is one of the many San Franciscans traveling across the turbulent waters that day. She talks about reconnecting with the stories of those who spent time on Angel Island. She herself had family that stopped in Angel Island.

“My grandparents came over in 1880 to 1920,” says Lee. “During that period of time many came over after the earthquake, claiming they had relatives.” Her enthusiasm for the new Immigration Station, which preserves these memories, is apparent.

“The museum is really important not just for Chinese immigrants, but all immigrants,” she says, ready to observe and learn more about the history of her relatives.

Another man traveling to Angel Island is Russell E. Lowe, office director for Sen. Dianne Feinstein (D-Calif.). He came to visit Angel Island to pay respect to his father, stepfather, fatherin- law and to the ordeals they were forced to overcome. Lowe’s family members came to the island in the late 1930’s as teenagers and stayed for about a month until they made it to San Francisco with false papers. For him, the day provides a chance to honor and learn more about his family’s past.

The hum of excitement travels along with the crowd as everyone pours out of the Blue and Gold ferry onto the refurbished shores of Angel Island. The trolley up to the Immigration Museum is running slow, so the Legend staff decides to walk up the steep slope. Mud seeps through shoes and the patter of rain is persistent, but those cheery smiles from the boat remain. Excited chatter, some in English, mostly in Cantonese, can be heard all around.

For many families, this muddy march is not a punishment, but rather an exciting prologue to new discoveries of their family’s history. The ceremony begins as Angel Island Superintendent Dave Matthews recites a moving poem. The room is silent; everyone in the crowd listens attentively. Next, Ming Hsu speaks to the public in a different dialect, touching the hearts of all who understood and all who remembered. This ceremony means much to the families whose elders were forced to wait anywhere from a few days to years before entering America.

Outside the ceremony, the faint sound of a bell is heard. A small child rings it over and over, mesmerized by the same tones of hope and sorrow that guided his ancestors across the water so many years ago.