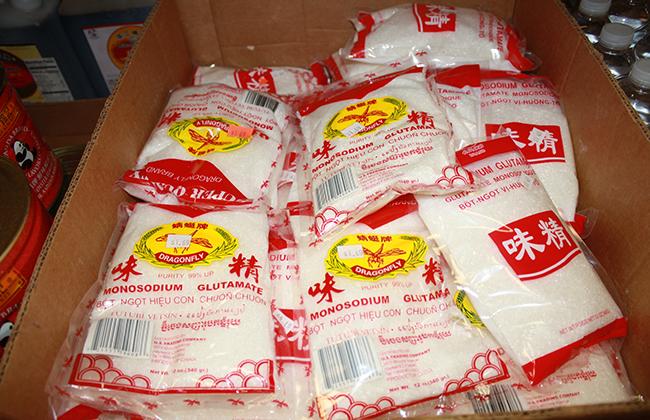 Ready to eat bags of MSG at New May Cheung Co., a grocery store on Irving Street, are a best-selling product at $1.69 each.

Although it is terribly clichéd, the saying “you are what you eat” holds great truth. But do you even know what you eat away from home?

In two weeks, Californians will vote on Proposition 37, which would require companies to label their packaged food when it contains genetically modified organisms. Unfortunately, Prop 37 exempts restaurants. And the widely used food additive, monosodium glutamate, also known as MSG, is not covered by the proposed legislation, so even if Prop 37 passes, the withholding of MSG nutritional information in restaurants wil be legally permitted.

MSG is one of the most commonly used food additives. This revolutionary sodium salt of a glutamate acid is a naturally occurring non-essential amino acid, which enhances and improves the taste of food and is used as a salt substitute. MSG is used for tenderizing meat, soups, salad dressings and is added to countless other foods.

Despite growing calls for the labeling of genetically engineered food, no such awareness seems to be evident when it comes to MSG. Interviews with food merchants on Haight Street revealed a lack of knowledge about the additive.

“Isn’t that illegal?” asked Megan Mayer, a concierge at the Red Victorian Café located on Haight and Cole streets.

Though many Urban students don’t know how commonly used MSG is, some say they have felt side effects after eating food that contains it. Symptoms of MSG intake can include headaches, rapid heartbeat, blood pressure, digestive problems, induced asthma, numbness, nausea, drowsiness, and weakness.

“After I eat MSG I get really tired, like falling asleep, standing up tired. I also get headaches and sometimes stomachaches. It’s not fun,” said Mackenzie Kwok (’14).

At the University of North Carolina, Ka He, assistant professor of nutrition and epidemiology was quoted in The New York Times as saying that “MSG is not toxic, but now the question is: Is it healthy? This study is a warning that we should be cautious.”

At Marnee Thai, a restaurant located at 2225 Irving St., an unidentified waitress acknowledged that MSG is used in their food. Yet there is no mention of MSG in the awards and recommendations that the restaurant has reaped, from reliable sources like Zagat and Yelp.

Daniel Chang, a manager at Little Paris 2, 2305 Irving Street, said that MSG was commonly used in all restaurants, and especially in Asian cuisine.

The ignorance of MSG is so great that sometimes even the servers are unaware of the use of MSG in their restaurant or of its existence. When asked if chicken at a Kentucky Fried Chicken restaurant located at 1900 Irving Street contains MSG, an unidentified server replied, “no, I’m sure we don’t,” yet KFC is one of the biggest users of MSG, according to msgtruth.org.

At the Pork Store, located at 1451 Haight St., waitresses said that they did not know of the substance.

Unfortunately, even restaurants can be the last to know if MSG has been added to the ingredients they use in their dishes.

“We don’t add MSG in our food, but we don’t know if it has been previously added to the food,” said a server at the Red Victorian Café.

While California’s Prop 37 is a step in the right direction towards more consumer awareness about food, it is still important for citizens to be informed of MSG and genetically modified food. For more information on the subject, visit truthinlabeling.org or msgtruth.org.