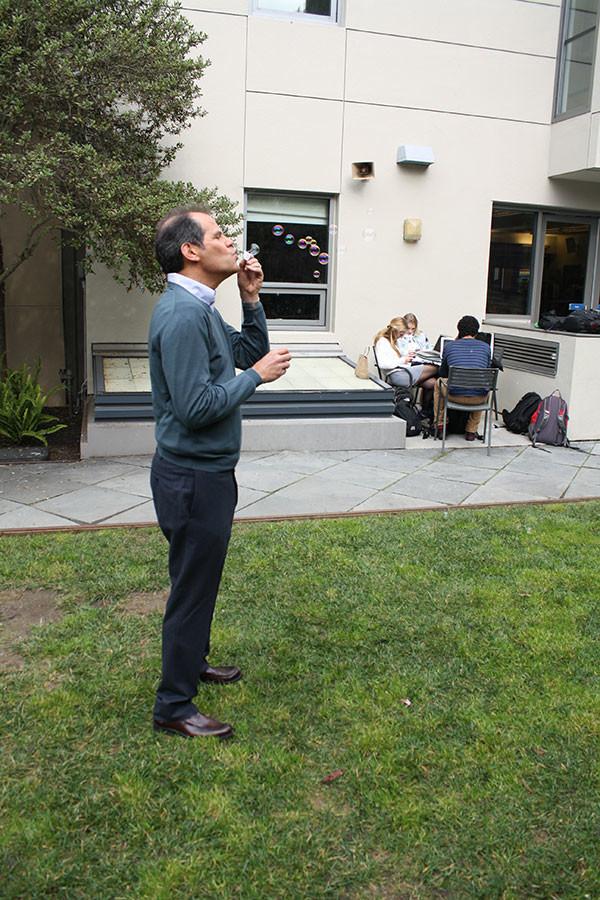 Mark Salkind, Head of School, blows bubbles in the garden.

Many Urban students argue that while the Urban “bubble” could generate positive discussion, at times it simply allows students to remain complacent in their place of privilege.

“Every aspect of Urban is shaped by privilege, so it is constantly affecting me at school,” said Gwen McLaughlin (‘16), co-leader of White Privilege Awareness Club. “The main thing I try to do is not slip into the mindset that my experience is the norm, or Urban as a school and community is the norm because it’s easy to do that as a privileged individual.”

White Privilege Awareness club is a place where students can educate themselves about what it means to be privileged in Urban, the Bay Area, and the world.

“Recognizing privilege at Urban meant looking outside to realize that most everything we experience at Urban is from a place of privilege, at least for me, as a white woman,” said Leila Kaplan (‘14). “I joined WPA in an attempt to understand my own place in the world in relation to my privilege.”

Although some students and faculty work to create a dialogue about privilege, many students still feel shocked by the extreme privilege at Urban.

“When I first came to Urban I felt extremely isolated. I came from a middle school which had over 1,000 students. Most of my friends were other kids of color, because that was simply the majority of the school’s demographic, and pretty much all were lower-middle-class,” said Daniela Sweet-Coll (‘16). “I wasn’t fluent in English until kindergarten, but in public school I felt completely at home. At Urban, I felt like people live in a bubble of their own wealth and whiteness, and as a result I felt very out of place.”

“I transferred to Urban from a 4,000-student public school — one that was incredibly diverse. While I loved Urban, it made me uneasy and frustrated that I was able to make the choice to transfer to such an expensive school while probably 90% of Berkeley High’s student body would not have been able to do that,” said Wilson. “It was strange to switch from that level of diversity to a fairly homogenous community.”

Wilson said, “To deal with my own discomfort around the seemingly gross privilege I was awarded just by being white and being from my family, I decided to start going to WPA and similar events … To me, it seemed like an obligation.”

After leaving Urban’s bubble of privilege and going to Hampshire College in Amherst, Massachusetts, Kaplan gained more perspective on what having privilege means in a broader context.

“At Hampshire, people are aware of privilege in a more productive way where they actually try to fight the system rather than just talk about it,” Kaplan said. “Here, white privilege is definitely talked about but in the form of the systematic problem of white supremacy.”

While, at Urban, WPA meetings and forums are helpful for students to “unpack the invisible backpack of privilege,” fully dismantling privilege requires more than just discussing it.

“I think that most Urban students are very good at talking about their privilege, but I think few of them really understand the greater impact,” said Sweet-Coll. “In my experience, students know the right things to say, but some struggle to connect the dots and understand how privilege shapes their identities within their communities and country.”

For many Urban alums, leaving Urban is a culture shock. While Urban undoubtedly has a diversity of opinions, the political views of Urban students, especially their social views, are extremely homogeneous. In a recent survey conducted by the Urban Legend, 96 percent of Urban students consider themselves “socially liberal,” whereas a 2014 Gallup poll found that only 30 percent of Americans consider themselves “socially liberal.”

While Urban students do tend to go to traditionally liberal colleges, very few schools are as socially liberal as Urban. So what is leaving Urban’s “liberal bubble” like for alums and what do current Urban students think about their impending departure?

For some Urban alums, leaving the “bubble” is a bit of an awakening. Eli Chanoff (’13) experienced this to its greatest extent when he took a gap year after his senior year to live in Senegal. “I lived in a country where homosexuality is illegal, women are subservient to men and atheism is not tolerated. Definitely a more conservative environment than any I had seen before, or that I’m likely to see in the US,” said Chanoff.

For some current Urban students, leaving Urban’s “liberal bubble” is a terrifying prospect. “I’m kind of scared of leaving the liberal bubble. While it will be interesting to be surrounded by more perspectives and more varied opinions, there are definitely opinions out there that I don’t want around me,” said Emily Miller (’15).

For some students, especially those attending traditionally socially liberal colleges, like Madeline MacGillivray Wallace (‘14), who attends University of California, Santa Barbara, the transition out of Urban has not been very difficult. “(Leaving Urban has been) a change of pace, for sure – in fact a very healthy one. Despite how isolated a school like Urban is, attending it (and of course living in San Francisco) helped expand and open my mindset to accept ideas and people of all backgrounds and standings. I left Urban with the knowledge that I would be entering a place very different from it, and much more representative of the country we live in. We had lots of open discussion at Urban. That is something that I absolutely credit my growth mindset and honesty for. And that in partnership with being in San Francisco contributed to my acceptance of and critical thinking toward reality.”

Jacob Mooallem (‘16), who left Urban to move to Florida after sophomore year, has had a much more striking transition out of the Urban bubble. “Leaving (Urban) has been interesting. I came into Urban as a fairly conservative person and left on the more moderate side. Returning to a conservative environment has been challenging, though due to my experiences at Urban, I’m able to handle myself in situations where I have different opinions than the people around me. I think Urban’s style of open discussion and dialogue has helped me in handling people with different opinions. That style inside and outside the classroom has helped me in understanding people’s viewpoints and being able to convey mine in a way that is constructive and honest. Having been to both a liberal school and now a conservative school, I understand different environments and where people are coming from a little bit more.”

While many Urban students fear their impending departure, few Urban alumni talk about leaving Urban’s extremely socially liberal climate as difficult. Why? Well, most pointed to Urban’s ability to teach students how to communicate and understand other points of view.

While Harry Krinsky (‘13), a sophomore at the University of Michigan, explained how Urban prepared him to handle opinion, even if they did not exist at Urban. “Urban does a good job of preparing students to be open minded and think critically about all kinds of issues (social, political etc) … Urban does everything it can to preach critical thinking as I said and in the end having that is what having good social and political discourse is about.”

Many believe Urban to be a bubble of political-correctness, inclusion, and non-traditional grading. Inside the bubble, students are assessed based on effort, participation, test scores and essays – a variety of topics to see if they are meeting the most important standards of the subject. But what happens when students graduate, and the bubble pops?

Urban’s “recycle” policy (making and turning in test corrections to further understanding and receive credit) is rare in college, and so is Urban’s standard grading system. At most colleges, there might be some helpful comments, but this will usually be followed by a hard grade – something that Urban students rarely see. Many Urban students believe traditional grading at Urban goes against its values. It motivates students to work hard for the red letter, rather than for their own curiosity and understanding.

21 out of the 32 Urban students and faculty who filled out a bulletin board survey stated that they preferred rubrics to grades.

“It gives me more of a sense of what went wrong. Some parts of my rubric can be really good, and then others can be bad, and that will tell me why my grade isn’t higher,” Maddy Murnane (’15) stated on the same survey.

With a rubric and comments, teachers are able to justify their grades, even if the students are dissatisfied with their assessment.

Many opinions align with Murnane’s, but Stella Kaufman (‘15) stated, “It’s hard to translate the rubric into a grade, and since we get a grade at the end of the class anyway, it would be more helpful to get feedback in grades.”

“It’s not realistic to tell students not to focus on the grade, because outside of Urban that’s what matters, it is what colleges see and despite what Urban promotes, it’s an important part of our education,” continued the source.

Regarding transitioning to college, Murnane stated, “I think I’ll be fine, but I’m going to really miss the feedback.”

“I am excited to have grades again,” said Kaufman. “I am frustrated with Urban’s grading policy. It’s not realistic not to tell students (their grades),” they continued.

“I think that the rubrics at Urban and having interim conferences with the teachers helped me to be comfortable going to office hours with my professors,” said Claire Conklin (‘13), a student at Pitzer College, a small liberal arts school that is philosophically similar to Urban.

“I guess the change wasn’t too bad either, since I’m a science major and lab reports have clear expectations and are given back with a rubric-like grade lay out.” Conklin continued.
Not all students attend schools like Urban, though.

“I think it’s good that Urban teaches lateral learning, but at the same time, in college almost all of your grade is based off test scores. Rubrics taught me how to learn better as a student, but definitely made the transition to grades much harder,” Powell continued.

While there are both positives and negatives to the Urban grading system, the majority of surveyed Urban students prefer to have the rubric with written advice.
“What students tend to object to (in college) is not the grades but the lack of additional feedback in the form of standards and comments,” Jonathan Howland, Dean of Faculty stated.

Although the transition can be difficult for some, the educational depth that Urban provides validates the college grading acclimation. “Urban students are well-prepared for college because they can think independently, organize themselves purposefully, collaborate generously, and write well,” Howland continued.

It seems that although leaving Urban and its grading bubble might be hard for some, it is worth the engaging education.