The future of San Francisco as a sanctuary city 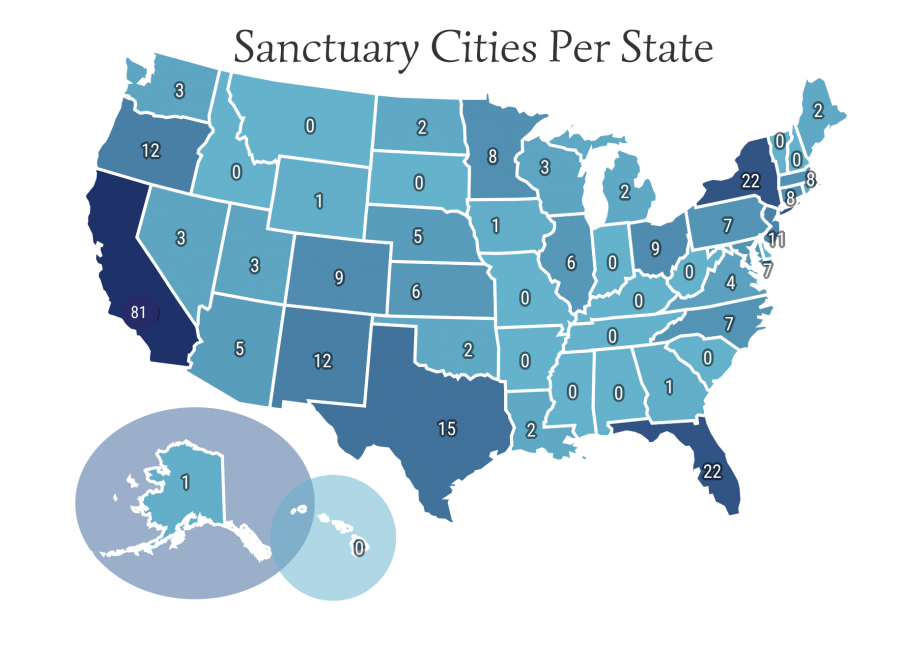 Infographic of sanctuary cities in the United States, made by Kian Nassre.

32 years ago, San Francisco became the 13th sanctuary city after then-mayor Dianne Feinstein signed a resolution protecting the increasing amounts of Guatemalan and Salvadoran immigrants. This past year, sanctuary cities reemerged into the national conscience after becoming a major talking point of the 2016 presidential election. Despite the lack of an official legal definition, San Francisco’s sanctuary city status has continued to assure “that persons are not going to be discriminated against or hassled in San Francisco because of their immigration status as long as they are law-abiding,” as Feinstein first stated after signing the resolution into effect.

Today, there are over 364 sanctuary counties and 39 sanctuary cities nationwide, according to the New York Times. In most cases, being a sanctuary city or county means limiting the extent to which local law enforcement cooperates with federal immigration authorities, such as the U.S Immigration and Customs Enforcement (ICE). According to the Congressional Research Service, sanctuary city policies are enforced through nonbinding resolutions, executive orders, police department orders, or sometimes laws. “I think people mistakenly believe that sanctuary cities interfere with ICE (Immigration and Customs Enforcement) operations within a city–that city authorities somehow prevent ICE from conducting its investigations or going after people who they want to arrest.  In fact, this isn’t the case. The point of a sanctuary city is that local law enforcement cannot be compelled to assist ICE in doing its job. In essence, the police have no obligation to report someone who may be in the country illegally. I also think people mistakenly believe that sanctuary cities go out of their way to shield undocumented immigrants with criminal convictions. This is not the case,” said immigration lawyer Gali Gordon of Gordon Law Group.

While San Francisco has been a sanctuary city since 1989, when the City and County of Refuge Ordinance was passed, the issue was reintroduced after the death of Kate Steinle in July of 2015. Steinle was shot at San Francisco’s Pier 14 by Juan Francisco Lopez Sanchez, an undocumented Mexican immigrant who had previously been deported five times and had seven felony convictions of drug possession and illegal reentry. Despite an ICE order that he be detained on the grounds of a 20 year old outstanding marijuana possession charge in March of 2015, San Francisco’s policy of only cooperating with ICE officials on immigrants who face an active warrant for arrest meant that the drug charge was thrown out.

Cases like these drastically misrepresent the effect of sanctuary cities. “There have been a few high profile incidents exploited by politicians of violent crimes committed by undocumented immigrants in sanctuary cities, but it’s a myth that undocumented immigrants commit crimes at a higher rate than the native population. In fact, it’s quite the opposite. Immigrants commit crimes at a far lower rate than the native population,” said Gordon. According to an analysis of the 2010 American Community Survey performed by the American Immigration Council, 1.6 percent of immigrant men between the ages of 18 and 39 are incarcerated compared to 3.3 percent of men who were born in the United States.

Immigrant advocates like Mila Yoch, Chair of the San Mateo County Youth Commission’s Immigrant Youth Committee, have made it their mission to bring awareness to the benefits of sanctuary cities. “Sanctuary cities protect immigrant rights and improve the relationship between the immigrant community and local law enforcement. Some of these benefits manifest in the lives of immigrant youth because they allow for a safe living environment knowing that their rights are protected and that they can trust the local law enforcement to protect them, without fear of deportation,” said Yoch.

These benefits may be in jeopardy considering President Trump’s threats to cut federal funding to sanctuary cities. During a visit to Phoenix, Arizona, Trump said he will, “block funding for sanctuary cities…We will end the sanctuary cities that have resulted in so many needless deaths. Cities that refuse to cooperate with federal authorities will not receive taxpayer dollars.” Despite this threatened crackdown on sanctuary cities, no sanctuary city has backed down and many politicians and legal experts doubt the viability of his claims. “I think the first thing is to recognize that from what I know so far because of a decision by the Supreme Court, no president’s in a position to cut off funding across the board. It has to be very specific to the matter at hand,” New York City Mayor Bill de Blasio said in an interview on the Brian Lehrer Show. “If we disagree in one particular policy area, there may be opportunities for the federal government to say, ‘well we are not going to fund you in that policy area,’ but not across the board.”

Gordon agrees, and when asked specifically about San Francisco, she said, “We are headed towards a showdown between the federal government and the state of California on this issue. San Francisco has promised to continue to be a sanctuary city, and one of Trump’s promises is to withhold federal funding to sanctuary cities. If Congress tries to do that, it will be interesting to see how San Francisco fights back. We may see a lot of litigation on this issue. It’s likely unconstitutional for the federal government to withdraw federal funding from sanctuary cities–the feds can’t compel the states to use state resources to enforce the immigration laws.”

However, the stakes are high for San Francisco should Trump’s threats come to fruition; “San Francisco receives roughly $480 million directly from the federal government and more than $900 million from the state, much of it pass-through federal money,” city controller Ben Rosenfield said. The approximately $1 billion California stands to lose accounts for more than 10% of San Francisco’s $9.6 billion budget. Many social services would be hit the hardest. In New York City, a sanctuary city that is also at risk of losing funding, “some of the biggest recipients of federal funds in the city are the Department of Social Services, the New York City Housing Authority and the Administration for Children’s Services,” according to a CNN article on the matter. “Everyone feels vulnerable now. Before, people with legal status felt more secure in this country but now even those with permanent residency (green cards) are scared of what may happen during a Trump presidency. I received many panicked emails from clients immediately after the election.” said Gordon.

Sanctuary cities show no sign of backing down. “We will always be San Francisco,” San Francisco Mayor Ed Lee said at a City Hall event. “I know that there are a lot of people who are angry and frustrated and fearful, but our city’s never been about that. We have been and always have been a city of refuge, a city of sanctuary, a city of love.”
UPDATE: On January 25, 2017, President Trump signed an executive order declaring that “We cannot faithfully execute the immigration laws of the United States if we exempt classes or categories of removable aliens from potential enforcement.  The purpose of this order is to direct executive departments and agencies to employ all lawful means to enforce the immigration laws of the United States.” and specifically, “the Attorney General and the Secretary, in their discretion and to the extent consistent with law, shall ensure that jurisdictions that willfully refuse to comply with 8 U.S.C. 1373 (sanctuary jurisdictions) are not eligible to receive Federal grants … The Secretary has the authority to designate, in his discretion and to the extent consistent with law, a jurisdiction as a sanctuary jurisdiction.” Opposition to the order often quotes 1997’s Printz vs the United States when Antonin Scalia’s majority opinion stated that “The Federal Government may neither issue directives requiring the States to address particular problems nor command the States’ officers, or those of their political subdivisions, to administer or enforce a federal regulatory program.” Despite Trump’s order, San Francisco Mayor Ed Lee said, “Nothing has changed. Our city is still a sanctuary city. We are going to remain a sanctuary city precisely because the purpose is to keep everybody safe.”