What happens if you Google crazy state laws 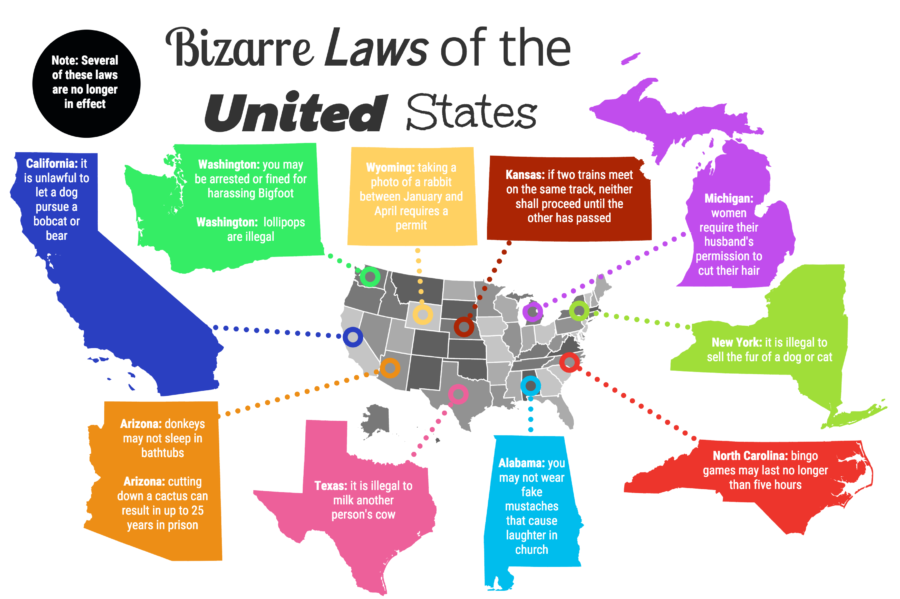 Infographic showing some of the strange state laws in the US, made by Kian Nassre, Head of Infographics.

It all began when I heard something bizarre on an old episode of Bones: apparently premarital sex is illegal in Virginia. My first thought was no way. There is no way that in the 21st century, the state of Virginia does not allow premarital sex. So I did what any curious teenager would do when they heard something strange about sex: I Googled it.

What I found was far more than anything I could have expected. There are dozens, no, hundreds of absolutely insane state laws out there to this day. Now some of them are just urban legends or fake news, but many of them checked out. Since we at the Urban Legend have a mandated rotation of online stories, I thought that this was just too good of an opportunity to pass up. So I decided to fact check these myths and pick some of my favorites so I could make a colorful infographic for your enjoyment.

Go on Google right now if you do not believe that any of these state laws are real. Do it. I’ll wait.

There see? These crazy laws ARE true!!!

Important distinction: just because a law is real doesn’t mean it is enforced, and it is likely that some of these have since been repealed.

In a quiz of 84 people conducted by the Urban Legend between March 23 and March 25, participants were shown a series of laws, half fake and half real, and asked to pick the real one. You can see how well they did below, but it goes to show you how crazy these laws are that 41 of the respondents thought that “Stealing a dead body is illegal unless you are using it as a scarecrow” was more likely than the actual law “You may not wear a fake mustache to church in order to cause laughter”

I came up with the most strange, ridiculous, archaic, and useless laws I could think of, and a sizable percentage of respondents believed that they were more likely to be real than the actual laws. In case you do not believe me, look at my list of bogus state laws:

KFC requires a mayor’s permission to build a restaurant in a city
Sweaters depicting the dismemberment of animals are illegal
Women are not allowed to drive unless their husband is waving a red flag out of the car
You must have your parent’s permission to sell your eyeballs, even if they are deceased
Killing a bird and placing it in a stolen car can result in up to 10 years in prison
It is illegal to sell the fur of a cat
Farting in church can result in a $100 fine
Stealing a dead body is illegal unless you are using it as a scarecrow
It is illegal to molest taxidermied animals
Kissing a woman is illegal if you have a mustache