Obamacare: the bill that changed everything 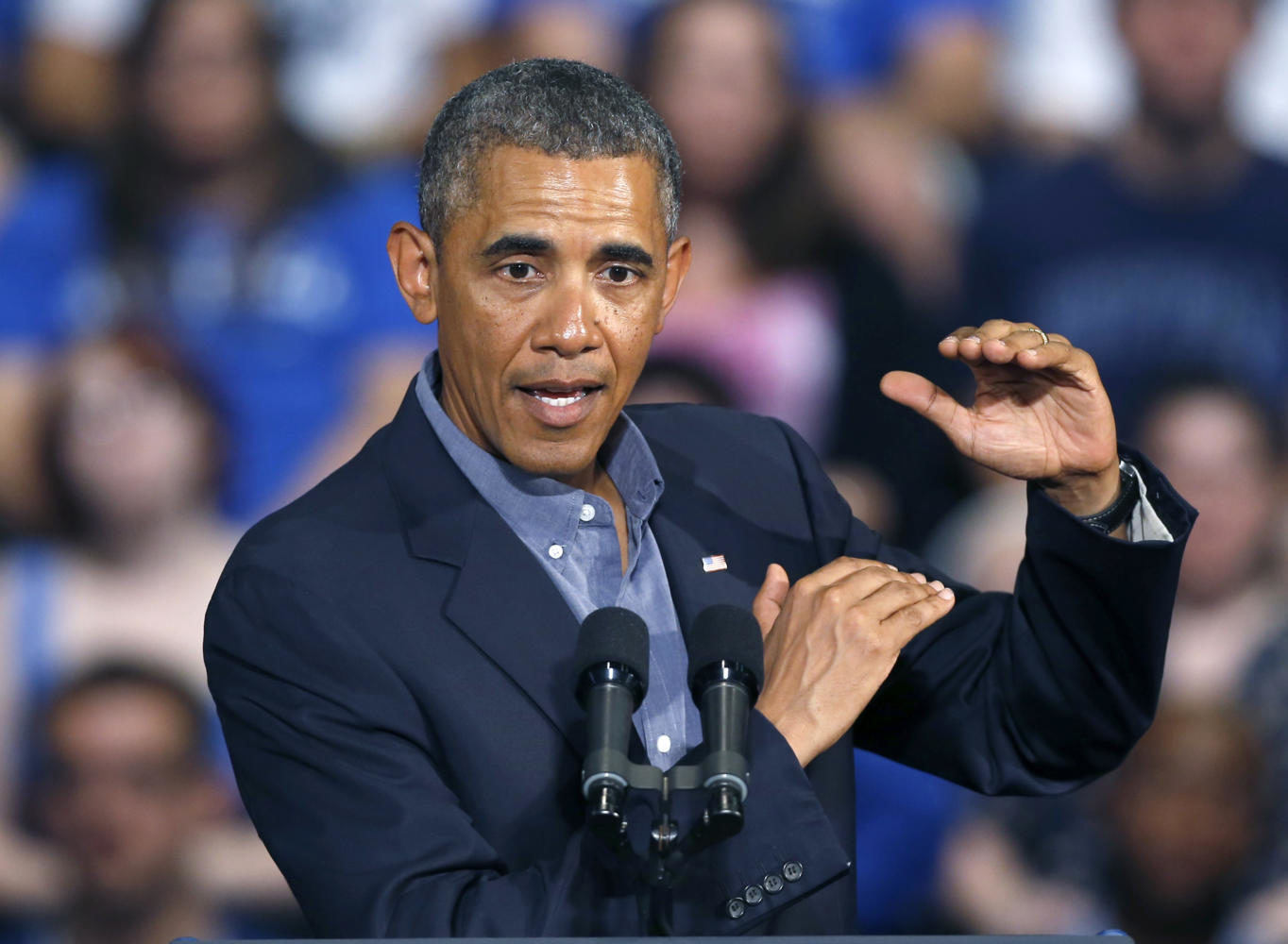 President Barack Obama gestures as he speaks at the University at Buffalo, the State University of New York, Thursday, Aug. 22, 2013 in Buffalo, N.Y., where he began his two day bus tour to speak about college financial aid. (AP Photo/Keith Srakocic)

On March 23, 2010, President Barack Obama signed the Patient Protection and Affordable Care Act into law. However, in spite of the law’s fame (or infamy depending on your political views,) many do not even know what Obamacare does. Considering the Republican bill in Congress that seeks to repeal and replace Obamacare, it is important to understand the current system.

A Reuters survey from January 9, 2014 found that 69 percent of uninsured persons in America lacked basic knowledge of Obamacare provisions, including their own eligibility.

Numerous myths exist about Obamacare. There is Sarah Palin’s myth that Obamacare included so-called “death panels” that elderly people must go to prior to receiving health insurance. In 2009, PolitiFact rated this as their first “Lie of the Year.” PolitiFact had other examples. Classics include that if someone signs up for Obamacare, they have to agree to a home inspection; Obamacare is the largest tax increase in the world; 76-year-olds are not eligible for cancer treatment; if someone hasn’t seen a doctor in 15 years then they can’t now; and a lot more.

Understanding what function Obamacare actually performs requires an understanding of Medicare, Medicaid, and the Children’s Health Insurance Program (CHIP). The first two were created by President Lyndon B. Johnson. Medicare is a health coverage safety net for the elderly or disabled while Medicaid provides health insurance for persons of low-income. CHIP is a subcategory of Medicaid, which, according to the Kaiser Family Foundation, provides health insurance to over 8 million children.

A majority of the provisions of the Patient Protection and Affordable Care Act stem from Title I, “Quality Affordable Health Care for All Americans.” The key pillars of these provisions are as follows: you can not be denied health insurance because of a pre-existing condition, you must have health insurance or face a tax penalty (Individual Mandate,) and Medicaid would see an expansion to cover persons up to 133 percent to 138 percent of the Federal Poverty Line (FPL.)

There are a couple reasons why the Individual Mandate exists. On July 17, 2013, 30 economists in the healthcare field sent a letter to congress expressing the necessity for the Individual Mandate. They said that the mandate was necessary to preserve the financial stability of other Obamacare provisions while ensuring that fewer individuals would gamble with their lives by foregoing insurance altogether.

Concerns of insurance costs (premiums) rising came up during the 2016 election debates. However, according to the Congressional Budget Office and the Department of Health and Human Services, premiums would be 30 to 50 percent higher without Obamacare. Moreover, a CNBC article from July 27, 2016, reported that premiums dropped between 10 percent and 20 percent in 2014 after Obamacare came fully into effect.

The healthcare consulting firm Avalere Health reported a lack of competing healthcare providers in many states due to the domination of providers such as Humana and United Healthcare. This low competition environment has, in turn, removed capitalistic incentives to lower premiums and thus become a reason why premiums have risen.

Even if a state has many providers, consumers may find themselves in a county with only one insurer. This prospect hits an extreme in the states of Alabama, Alaska, Kansas, North Carolina, Oklahoma, South Carolina and Wyoming. Every coverage region in these states has only one insurer. If they decide to pull out or reduce coverage in those regions, countless persons find themselves without any health insurance.

This was the case in Pinal County, Arizona, when Aetna significantly reduced its operations in that sector, leaving applicants with no public exchange options except for Blue Cross Blue Shield of Arizona, which also plans to pull out.

However, Obamacare does have a connection to the rise of premiums. On August 15, 2016, Aetna CEO Mark T. Bertolini cited Aetna’s $200 million loss in the second quarter of 2016 from its public exchanges and the likely cause: pre-existing conditions. One of the most popular Obamacare provisions is the one causing insurance premium spikes. This is because, under Obamacare, healthy people are in the same pool as those with pre-existing conditions. This system is designed so that the healthy help to subsidize health insurance for the sick, so if these pools are too small or have low healthy enrollment, premiums rise. As of October 24, 2016, the Department of Health and Human Services cited a 22 percent increase in premiums between 2016 and 2017.

Yet that provision is popular for a reason. A Kaiser Family Foundation study released on December 12, 2016, estimated that upwards of 50 million Americans under 65 have pre-existing conditions that, without Obamacare, would reduce their accessibility to and quality of health insurance.

There is another problem with Obamacare: the Medicaid Gap. Shortly after Obama signed the Patient Protection and Affordable Care Act into law, 26 states brought suits against its most controversial provisions: the Individual Mandate, which taxed persons without health insurance, and the mandatory state expansion of Medicaid, in National Federation of Independent Businesses v. Sebelius. The Supreme Court ruled that the Individual Mandate was constitutional 5-4, but agreed that a mandatory state expansion of Medicaid was not 7-2.

As a result, states are not required to expand Medicaid to 133 percent to 138 percent of the FPL. As of January 1, 2017, the Kaiser Family Foundation reports that only 31 states and D.C. have expanded Medicaid to that threshold, while 19 have not. In the latter, you can only enroll in Medicaid if you are below approximately 50 percent of the FPL. Since most persons below 100 percent of the FPL can not afford individual plans, this leaves a large section of Americans caught in a gap: too rich for Medicaid, and too poor for private insurance, even with cost assistance. According to the Kaiser Family Foundation, approximately 2.6 million Americans fall into the Medicaid Gap.

On March 24, 2016, NBC reported a distinct lack of knowledge in Texas surrounding marketplace insurance. The article brought up the 30 percent of Texans with individual plans who were not confident about what the term premium means. Additionally, the article cited Vivian Ho, chair in health economics at the Baker Institute, “The long-term success of the Affordable Care Act depends on buying, using and experiencing satisfaction with health insurance … The lack of understanding about basic financial coverage provisions of health insurance plans can lead to surprise and frustration … That can undermine efforts to increase coverage.”

This nationwide trend of poor education surrounding Obamacare and healthcare in general has left even the most basic aspects of Obamacare unknown, let alone the more complex ones. Even Obamacare’s name has been muddled. A Morning Construct survey from February 7, 2017, found that 35 percent of American adults did not know that the Patient Protection and Affordable Care Act is the same thing as Obamacare.

A survey of 90 Urban School students and faculty was conducted by the Urban Legend between April 26, 2017, and May 4, 2017. Each respondent was asked what Obamacare’s real name is, what Medicaid is, and what an insurance premium is. 48 percent of the respondents  did not know Obamacare’s real name. Similarly, 52 percent of respondents did not know what Medicaid was, while another 26 percent confused it with Medicare. And like the survey in Texas, 66 percent of respondents did not know what an insurance premium is. Considering how publicized Obamacare has become, this unfamiliarity is curious and potentially damaging to the revolutionary healthcare law.

Part of that aid came in the form tax credits and cost sharing subsidies for persons below 400 percent and 300 percent of the FPL respectively. Another of Obamacare’s most popular provisions allows children under 26 to stay on their parents’ insurance plans.

Obamacare also outlawed lifetime coverage limits, limited the monthly premiums that insurers can charge individuals to a percentage of their income, and decreed that insurers spend at least 80 percent of premiums on medical cost or issue rebates.

Since these provisions took effect, the percentage of Americans without health insurance hitting historic lows. A Gallup poll from January 9, 2017, and a Kaiser Family Foundation report from September 29, 2016, both estimated the percentage in 2015 between 10 percent and 11 percent. More recent surveys from the CDC place the percentage in 2016 at 8.8 percent.

“From my perspective as a physician, I have had an enormous number of patients come in, having not been seen by a doctor for four to five years, who now have the Affordable Care Act and are coming to the doctor,” Bason Mitchell said.
Timeline:
10/04/08: Barack Obama is elected president

10/02/10: Republicans take control of the House of Representatives