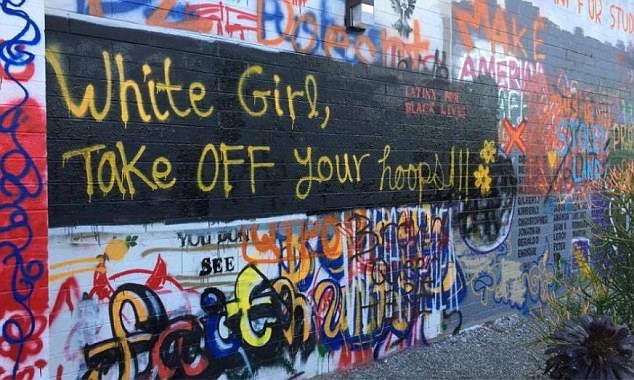 Photo of "Free Speech Wall" at Pitzer College, CA taken by Elliot Dordick of the Claremont Independent on March 7, 2017.

After a group of Latino students at Pitzer College expressed their frustration with white students wearing hoops on a free speech wall on March 4th, Urban students of color began to voice their opinions on hoops as cultural appropriation.

Jessie*, another Urban School student, spoke to the lack of recognition that appropriation gets in general and said, “People don’t want to talk about it and they think everyone knows about it, where in reality, people wear things and don’t understand what they’re wearing.”

In speaking to the cultural knowledge worldwide and in the Urban community, Clarke Weatherspoon, the Urban School’s Dean of Equity and Inclusion, acknowledged that “no one can know everything.”

Jessie* said that many trends from the 90s and early 2000s are coming back, “a lot of the trends are trends that people of color had started, but when white girls do it it’s so revolutionary.” This student went on to say that, “Places like Urban Outfitters are really capitalizing on appropriation, with selling [almost] $30 Selena shirts to white people.”

Hoop earrings, which have been popping up on countless fashion runways this year, have a deep cultural history that has recently come to light as companies like Urban Outfitters are selling oversized bamboo gold hoops (sometimes called doorknocker hoops) for over $10 and no cultural credit.

According to an I-D Magazine article written in March 2017 by Erica Euse, dating back to 2600 B.C, hoop earrings have historically held significance within communities of color. Thinner gold hoops were popular as Afrocentric dress was adopted within the 60’s Black Panther Movement while later, early hip-hop culture ushered in thicker and bigger hoops (typically looking like gold covered bamboo) like the aforementioned “doorknocker hoops.” This style was also popular among Latin American communities within the Chola movement in the early 90s. In speaking about bamboo or “doorknocker hoops,” Emily* said that while “there’s not always a meaning behind everything, if a person of color were to wear something like that, they’re afraid they might be labeled that ‘ghetto person’ which differentiates how white people wear these things.”

Jessie said that’s it’s less the “obvious appropriation,” that we see within the media, but rather she stated that “people aren’t very conscious and the problem lies in that people are taking trends that are from communities of color and being credited for starting them.” The same student expressed that as a community we “see white people wearing or taking these trends and all these white girls are just suddenly so iconic.”

Another student of color stated that, “As things like nameplate necklaces and earrings are becoming a ‘new’ trend, people don’t understand where they come from.” Weatherspoon connected to this idea of lack of attribution and stated that, “When elements of culture aren’t credited, it’s connected to systems of oppression and domination that people want to make right.”

Weatherspoon spoke of the “natural cultural exchange” that happens between people being different than appropriation, which he said means “to take something and make it your own.”

Though it might not be as clear as cornrows or dreadlocks, bamboo hoop earrings are an element of cultural appropriation some students feel still exists at the Urban School.

*Names changed to preserve the anonymity of students.