Puerto Rico post Maria: “feed the islands, not the exports” 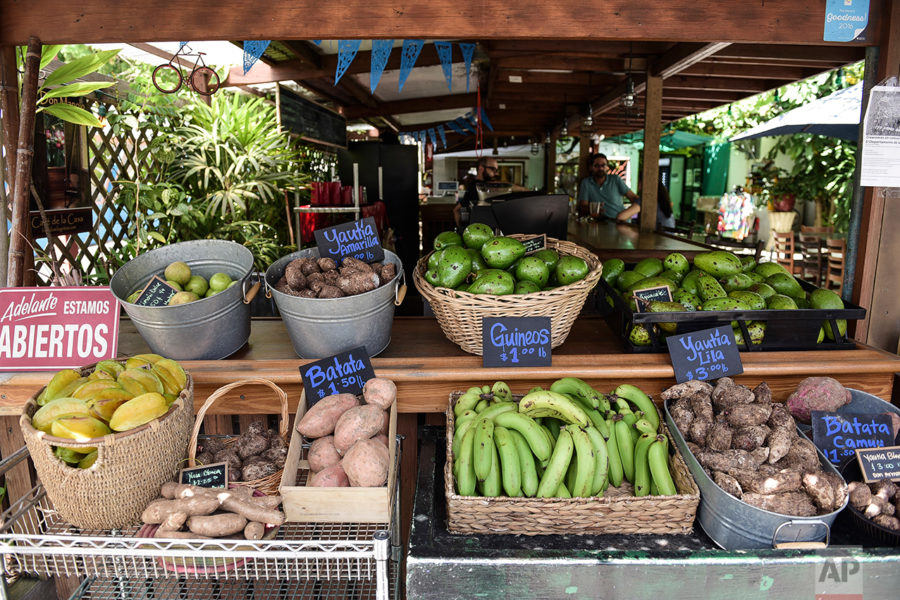 This Sept. 23, 2016 photo shows a produce stand inside El Departamento de la Comida farmers market and organic restaurant that sells locally grown produce in San Juan, Puerto Rico. The most recent statistics from the governor's office show farm income grew 25 percent to more than $900 million from 2012-2014 while the amount of acreage under cultivation rose 50 percent over the past four years, generating at least 7,000 jobs. (AP Photo/Carlos Giusti)

In the wake of destruction caused by Hurricane Maria, sustainable farming organizations in Puerto Rico such as El Departamento de La Comida are attempting to encourage a shift away from the country’s dependence on imports towards sustainable food practices.

Over a month since the hurricane first hit the island, many have learned to live without running water or power in what has been described as a post-apocalyptic situation. According to a report from Carlos Flores Ortega, Puerto Rico’s secretary of the Department of Agriculture, in a matter of hours after Hurricane Maria hit, Puerto Rico’s agricultural economy lost 80 percent of its crop value. In effect, the income from grown produce dropped by 80 percent. Puerto Rico imports over 80 percent of its food, and halted air travel and destroyed crops caused the food situation in particular to become dire. With many bridges and roads destroyed by the storm, even transporting the limited food supply has been difficult. According to the the mayor of Canóvanas, Lorna Sato, a city located in northeastern Puerto Rico, the city has “received 10,000 meals so far, and we’re a city of 54,000.”

Tara Rodríguez Besosa and Olga Casellas Badillo founded the wildly successful El Departmento de la Comida, an organization committed to promoting a sustainable approach to serving vegetarian and vegan dishes to San Juan locals and tourists alike. El Departamento began in 2010 as an experiment with a multi-farm Community Supported Agriculture (CSA) with the goal of “connecting the small and medium-sized farms working with agroecology,” said Besosa in an interview for the Urban Legend. From starting with a CSA and expanding to a restaurant and store, Besosa stated that “It’s not enough to just go local, not enough to just go organic, it really has to be both.” Besosa spoke about a farm brigade which she is currently working on fostering: “Within smaller farming communities, it really helps to have farmer to farmer contact and communication to share knowledge.”

With much of the agricultural industry left destroyed, community organizations like El Departmento de la Comida are attempting to rebuild not only their communities, but the food and agricultural system as a whole. Besosa stated, “Most of my farmers are not even in the farming senses and have taken relief and volunteer work into their own hands.” She said that right now, “By moving on, we have to be very local.” In the meantime, to help with the desperate need for food and resources, Besosa’s organization has been working to set up a pop-up kitchen and distribute food. They are also employing chefs and volunteers in the canning, freezing, and drying of what little food there is.

Not only did the recent hurricane cause high amounts of flooding and render the restaurant inaccessible, but their farms and nearby gardens were also destroyed. This hindered the restaurant’s ability to continue their food service and popular CSA program. Besosa said that losing their restaurant space was hard, but “I understand that our restaurant is not the need right now… We need to focus on our producers, who are our friends and our family.”

Within sustainable farming, Besosa said that “before seeds, you start with soil, start with structure and most sustainable farms have an educational aspect or a political aspect.” Besosa explained that most of Puerto Rico will have to rebuild their agricultural sector completely by “beginning with seeds.” While commercial farms also experienced great loss of property and income from the hurricane, with the land and soil itself destroyed, sustainable farms are faced with an even larger issue. It may take years for the soil to return to its original nutritional quality, but Besosa stated that within the sustainable farming community right now, they’re “focused on feeding the islands, not the exports.”