Healing stones, tourists and a warehouse: the story behind Things Lucky 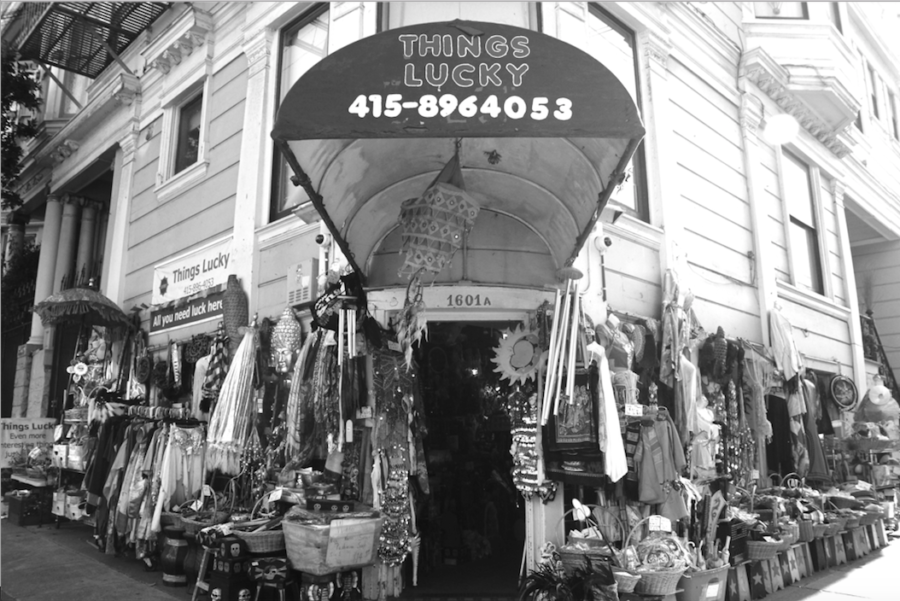 Sophia Vahanvaty, Editor in Chief of the Newspaper

With incense wafting through the windows and wares spilling onto the sidewalk, Things Lucky is hard to miss, especially for the dozens of Urban students who pass it while walking to school or heading to Haight Street during lunch. Despite its proximity to Urban, many students have never ventured inside, and rumors about the store proliferate in Urban’s hallways. The Urban Legend set out to find the story behind Urban’s elusive neighbor, Things Lucky.

25 years ago, when Susan Luo immigrated to the United States from Thailand, she founded Lucky Handicrafts: the business that owns Things Lucky along with two other stores in the Bay Area as well as a warehouse in the East Bay. She explained that she “started the business little by little” in 1993 by capitalizing on her love for buying stones and making jewelry. “When I started to buy stones, customers were interested and so I bought more,” said Luo.

In the beginning, she sourced primarily from the United States, however, as time went on, she started sourcing internationally from countries including Brazil, Morocco, Madagascar, Vietnam, Indonesia, Bali and India. Throughout this time, and to this day, Luo’s primary source of revenue has been working as a distributor selling wholesale goods in bulk to stores around the country. Currently, wholesale sales to about 1000 stores around the country account for 80 percent of her business.

She first became aware of the San Francisco location when she was supplying goods to Pink Lotus, the store that previously inhabited the storefront on the corner of Page and Ashbury. Luo said that “[the owner of Pink Lotus] could not continue. Nobody would take it at that time…She asked me if I would take it over. At that time, I wanted a store.”

After taking the store over, it was rebranded as Things Lucky but continued to sell similar types of goods. Today, the most popular items in the store are the stones, which have healing properties, according to Luo. Following a rock chart, Luo explained that rose quartz has love energy while clear quartz has peaceful healing energy. Luo’s personal favorite is jade, which is for protection and good luck.

Luo added that new wares are constantly being introduced into the store and that feedback from customers is integral to knowing what should and should not be sold. Luo mentioned that business has been growing over the years as more and more customers are drawn to their wholesale prices and variety.

Monique Perry, The Urban School’s Academic Registrar, explained that she initially stepped into the store because “It’s bright and colorful…One time I saw a skirt outside that I got my grandmother for Christmas one year. Another time I saw a robe that I got my mom for a gift.”

On an average day, around 30 people drop in and about half will buy something, but during summer vacation and weekends, the number of customers tends to rise, said Luo. She noted that many of the customers at the San Francisco location come from all over the world because of the Haight’s standing as a tourist attraction.

A recurring question of Urban students like Clara Miller (‘18)  is “How do they stay in business?” According to Luo, the existing amount of sales in the San Francisco location enables the store to break even overall and the wholesale business further helps keep the store in business.

Luo encourages Urban students like Roman Sarlo (‘20) who “have always wanted to walk in and check it out, but have never got a chance,” to stop by and check out her multitude of products from around the world.