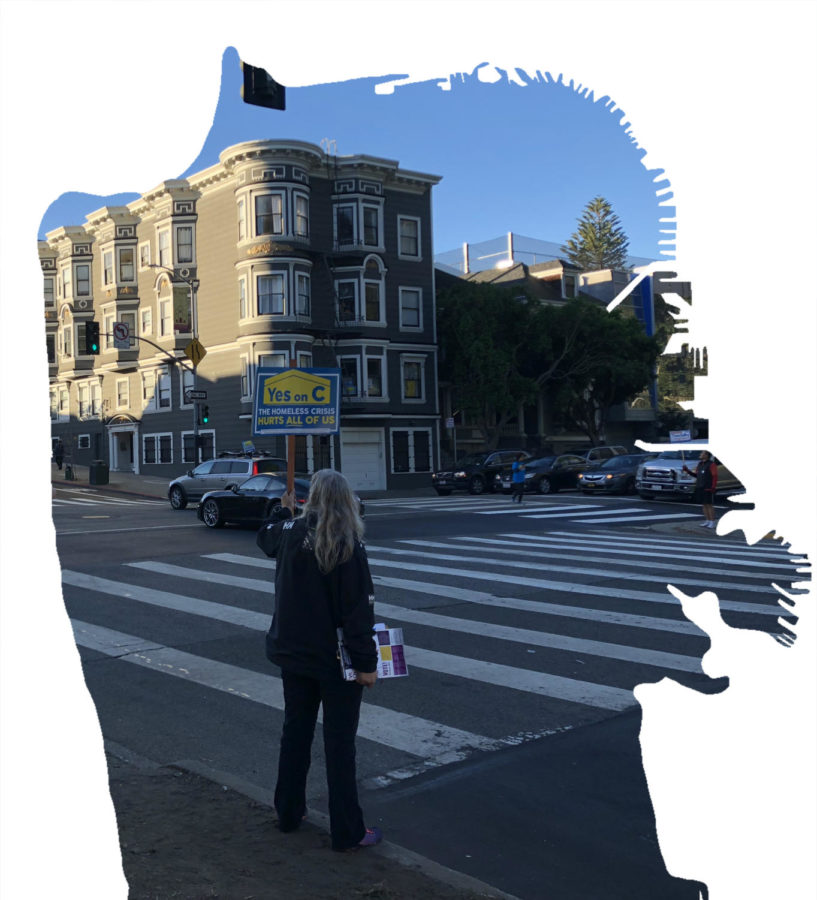 Supporters of Prop C near the Urban School. By Phoebe Grandi, Visuals Editor.

San Francisco’s wealthiest citizens represent the peak of American prosperity. In fact, becoming a member of San Francisco’s top one percent requires a higher annual income than any other city in the United States. An attractive destination for business owners and entrepreneurs alike, San Francisco is home to one percent of the nation’s millionaires.

At the Urban School of San Francisco, members of the city’s bottom one percent are ingrained within students’ everyday lives. Due to its relevance in the Service Learning curriculum and its presence in the Haight-Ashbury neighborhood, Urban students witness firsthand the magnitude of the homelessness crisis in San Francisco.

To combat the problem, San Francisco’s government has steadily increased the public homelessness budget and currently sets aside $382 million each year to support non-profit organizations around the city. Although homelessness rates have decreased slightly in past years, the San Francisco Chronicle reports that continuous population growth has caused San Francisco’s total homeless population to rise from 6,248 in 2005 to 7,499 in 2017.

The people of San Francisco recently voted to take bolder action against homelessness by passing Proposition C, a measure that will increase the taxation of wealthy companies to add $300 million to the city’s budget to fight homelessness. However, San Francisco’s historical failure to reduce the city’s homelessness population has raised questions around the city’s ability to maximize the impact of Proposition C’s funds. Elsewhere in the United States, a more progressive approach to the problem has yielded much more significant success at a fraction of the cost.

Over two thousand miles away, the city of Atlanta, Georgia, starkly contrasts San Francisco’s faltering attempts at countering homelessness. According to 11Alive, an Atlanta-based news company, the homeless population in the city has decreased by 65% since 2011, declining from 8,571 to 3,076 over the course of the past seven years. The reduction was achieved with only $110 million of annual government funding, less than one-third of San Francisco’s current homelessness prevention budget. The city’s success is likely a result of prioritizing sustained rehabilitation over temporary housing.

The Gateway Center’s success stems from a shift away from temporary housing and towards permanent rehabilitation. Robert Glustrom, a board member for the Gateway Center, said that the program should not be regarded as a source of temporary housing and that they have made a conscious effort to “move away from the concept of ‘just a place to crash.’”

The revised approach to homelessness enacted by the Gateway Center revolves around offering individuals the specific resources they need to exit homelessness. Glustrom said that when people enter the program, “we go through and we assess them and based on that assessment we can decide what services they need.” Glustrom said that to do this, the Gateway Center partners with up to 70 different organizations to provide individuals with personalized assistance, including a variety of opportunities for basic employment and education.

In contrast to this approach, San Francisco’s homelessness prevention strategy has largely revolved around providing the homeless with access to housing and food instead of longer-term care. Temporary housing remains a focal point of the city’s efforts and budget distribution plans published on the “Yes on C” website state that expanding and adding beds to homeless shelters will be made a priority.

Larkin Street Youth Services, a San Francisco-based organization focusing on homeless youth, is one program which has adopted a progressive plan for homelessness prevention. Veronica Pastore, the director of communications and marketing for Larkin Street Youth Services, said in an interview with The Urban Legend that their services have evolved to “include a continuum of care. We try to provide essentially everything a young person would need to overcome their homelessness permanently.” Like the Gateway Center, Larkin Street Youth Services provides a variety of medical and educational resources to individuals instead of just providing them with access to temporary housing.

Many San Francisco-based organizations which will benefit from Proposition C’s funding currently focus on providing access to short-term resources, which have been historically insufficient to solve the homelessness crisis in San Francisco. In a public statement released after the passage of Proposition C, London Breed called for a revision of current homelessness prevention strategies. Breed said that during the interim period before Proposition C is implemented, organizations must “sit down together to plan how we are going to deliver on the goals of Prop C.”

Glustrom is optimistic that the implementation of Proposition C can enable increasingly successful homelessness prevention efforts in San Francisco but warned that expenditure alone will not solve the problem. The $300 million Proposition C will produce “has the potential to have a significant impact on homelessness in San Francisco….but raising the money and implementing the wrong plan is not going to do as much good as possible.”