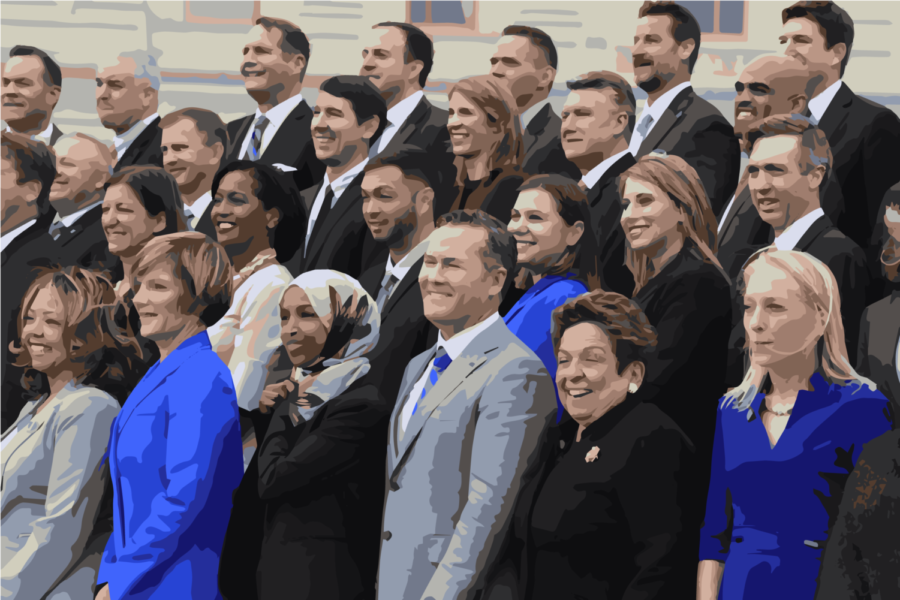 Digitally modified photograph of members of the freshman class of Congress pose for a photo opportunity on Capitol Hill in Washington, Wednesday, Nov. 14, 2018.

After eight years in the minority, Democrats took control of the U.S. House of Representatives on November 6, 2018, flipping 39 seats. They now control 235 out of the 435 total voting seats. Calling the victory “a new day in America,” Speaker of the House Nancy Pelosi declared that a Democratic-controlled House of Representatives would both “restore the Constitution’s checks and balances to the Trump Administration” while “work[ing] towards solutions that bring us together,” according to a speech given on Nov. 7.

However, with Trump in the White House and Republicans controlling the Senate, how much room is there for bipartisan work?

In order to paint a complete picture of the new House of Representatives, the Urban Legend reached out to freshmen congresspeople around the country and on both sides of the aisle, but was only able to speak with Eric Mee, the communications director for newly-elected Congressman Mike Levin. While Levin is only one congressperson among many, Mee’s comments about bipartisan work—particularly on local issues— reveal the nature of what gets candidates elected, major conflicts in Washington, as well as aspects of being a congressperson that have little to do with partisan fights.

Levin, who represents California’s 49th district—a coastal district spanning from southern Orange County to northern San Diego county—defeated Republican Diane Harkley this past November. While neither candidate was an incumbent, the district has a history of Republican control: former Republican Congressman Darrell Issa represented the district for 15 years.

According to Mee, Levin was successful because “by focusing on local issues, and issues that aren’t necessarily partisan, but important nonetheless, he was able to really capture people’s attention.” Specifically, this meant tackling local issues like the cleanup of waste at San Onofre Nuclear Power Generating Station, and taking steps t0 protect natural resources in the area. “It’s not necessarily a partisan issue in Orange County and San Diego County to want to tackle climate change and protect natural resources and the coastline,” Mee said.

Levin founded CleanTech Orange CountyOC, a clean trade energy association in Orange County. Throughout his campaign, he focused on environmental issues, naming “Accelerating Sustainable Energy and Environmental Protection” as one of his campaign priorities. “He believes that it’s really important that we confront…climate change with bold policies that are needed to make a difference,” Mee said.

Even in a time where environmental legislation might not get through the Senate or the President, Levin believes it is important to work towards these goals:  “the president might not suddenly become a believer in climate change overnight, but it’s worthwhile to work on the policy and lay the groundwork for progress to be made in the future,” Mee said.

While The New York Times classifies Levin as a progressive—a designation given to 25 of the freshmen Democrats in the House—Mee said that Levin sees himself as outside of ideological spectrum. For Levin, “it’s just a matter of getting things done for people in the district, and where he is on the ideological spectrum is not really important to that goal of getting things done for constituents,” Mee said.

However, it is clear that there are some issues where Democrats and Republicans cannot find common ground. It is unlikely that both parties will be able to reach a consensus about key issues such as healthcare or immigration—an issue that caused the government to shut down for a record-breaking length of 35 days. OR THE ENVIRONMENT

That being said, Mee emphasized the importance of working on areas of bipartisan support during these next two years. “No matter what issue that he’s working on, I think it’s important to [Levin] to work with his colleagues on the other side and find ways to find some common ground,” he said.

Levin will serve on the House Veterans Affairs committee, which, according to Mee,  “traditionally has been a committee where members can find common ground,” he said. National house leaders, like Pelosi, have emphasized the common ground between political parties on issues such as the skyrocketing cost of prescription drugs and repairing the nation’s infrastructure.

Even beyond these areas for bipartisan agreement, Mee emphasized that people in Congress—particularly in the House of Representatives—do a lot of work that operates outside of partisanship as a whole. For example, Mee said, “a huge part of what the office does is constituent services—[helping] constituents resolve issues with the federal government. Part of the problem is that too many people view this through the lens of national media and partisan fights… when there’s really a lot about being a member of Congress that doesn’t operate at that level.”