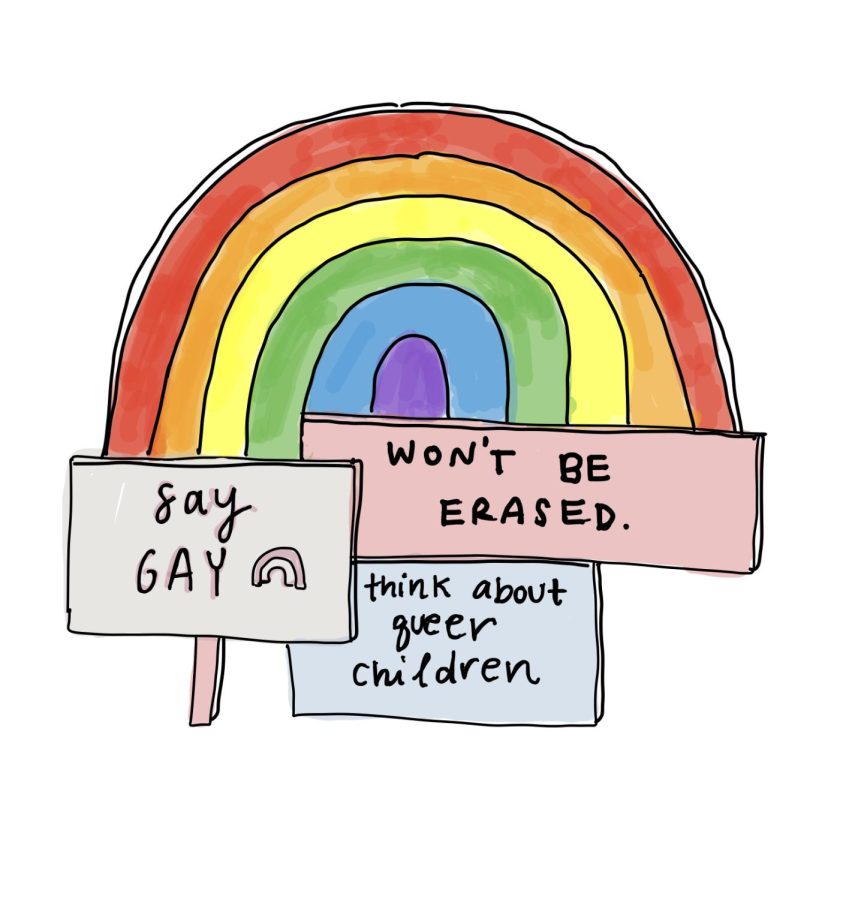 Over recent months, countless bills across the United States have been enacted that discriminate against the LGBTQ+ community. From Florida’s Parental Rights in Education Act, deemed the “Don’t Say Gay Bill,” to Idaho’s HB675 bill which bans gender-affirming care for transitioning youth, recent legislation against LGBTQ+ people has gained significant media coverage. In multiple interviews with the Urban Legend, students shared their opinions on the effects of recent laws and the activism that has followed their introduction.
For many students, the legislation came as no surprise. “I remember coming to class one day and people were talking about the [Florida Parental Rights in Education Act],” said Philo Judson ‘22. “People were like, ‘I can’t believe that in our day and age this type of thing still happens’… but it happens all the time, constantly.”
Other students also share Judson’s sentiment. “Honestly, I wasn’t super surprised,” said Adrian Vaznaugh-Sanchez ‘22. “Those states have a history of having less trans-friendly people in office and wanting to restrict transitioning in general.”
The potential psychological effects of anti-transgender legislation on transgender youth are detrimental during crucial stages of development. Laurel Socolow ‘25 said, “The [Florida Parental Rights in Education Act] is reinforcing to kids that their experiences are not valued, that we don’t see [their identities] as something that is good for other people to internalize.”
Vaznaugh-Sanchez also highlighted the self-hatred anti-transgender legislation can cause. “Putting [a] child through so much mental turmoil and causing them to hate themselves for a reason that isn’t going to affect anyone but that person and their family… it just seems so actively malicious,” said Vaznaugh-Sanchez. “It’s so easy and natural to want to transition if you’re transgender. These lawmakers [are] making up an enemy and then getting really angry about that enemy existing.”
When trans students’ identities are considered illegal, a teacher’s ability to foster classroom dynamics of trust and empathy suffers. “[Prohibiting discussions around gender identity] is incredibly dehumanizing,” said Sylvia Hoyt ‘23. “It’d be really difficult to be a child in a situation where you can’t seek help or ask questions to the people around you that you might trust, like your teachers.”
As the threat of legal consequence looms, teachers and parents who would otherwise be considered trusted adults are forced to keep topics of sexual orientation and gender identity taboo. “There’s zero community,” said Socolow. “It’s complete isolation.”
Judson shared their classroom experiences in middle school attending Stuart Hall, an all-boys Catholic school that runs from kindergarten through high school. “The first time I heard about trans people was someone coming up to me and being like, ‘you hear about this trans person going to Stuart Hall … Isn’t that horrible, isn’t that terrible?’” Judson explained the challenges of holding ones dignity while immersed in an environment of homophobia and transphobia. “I certainly haven’t benefited from that in accepting myself,” they said.
As anti-LGBTQ+ legislation has continued to pass, some have argued that taking action should not be necessary in the first place. “I’m thinking of one scene from Harry Potter,” said Judson. “Harry has to take action and McGonagall says ‘Yes, Harry Potter’s actions were very brave. The question is, why were they necessary?’ We shouldn’t have to come out in full force just to be able to exist.”
Urban, a liberal school in a liberal city, exists in a geopolitical bubble that largely supports LGBTQ+ rights. Because of this, Urban students’ strategies for taking action may manifest differently than those of students living in states affected by anti-LGBTQ+ legislation. “Urban students just don’t deal with the same political issues that other students across the country do,” said Hoyt. “It’s great that Urban students don’t have to deal with it, but they should also be learning more about it and advocating.”
Vaznaugh-Sanchez emphasized the importance of taking direct action that creates tangible change. “Give money to queers who are poor and people of color because that’s the most significant, direct action that you can take to actually tangibly help someone,” he said. “You can sign a petition and send a little email to your lawmaker, but ultimately, that’s not going to make as much of a difference as actually giving someone the resources to make their lives better, to move out of a state where [this] legislation is happening.”
Furthermore, the issue sometimes lies above physical legislation and becomes a discussion of moral values. “Am I allowed to say break the law? I think it’s a lot better to tell a trans person who’s living under these legislations that they should be able to be who they are,” said Vaznaugh-Sanchez. “If you have to give them hormones, if you have to take them out of state, or get them surgery, that’s something they need.”
In addition to making financial donations, there are other ways for students to take action that could prove beneficial. “We could set up easy to access information or a website or something that’s accessible,” said Socolow. “If [Florida’s youth] are not getting any education on queerness at all, some sort of educational platform could get to those kids who aren’t getting it through any public source.”
Legislation and activism aside, Vaznaugh-Sanchez emphasizes the importance of celebrating transgender joy. “We need to focus more on how being trans is actually an awesome thing.”