The real cost of raising tuition 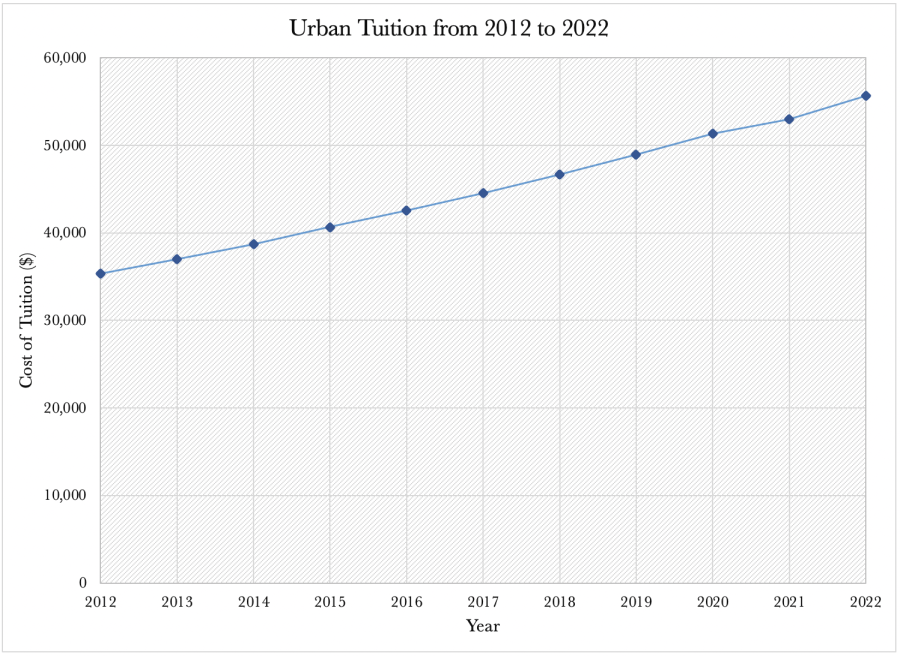 According to the Urban website, in 2021, the school offered a collective $4.65 million in financial aid so students whose families were not able to afford the full Urban tuition could attend. Though there is a great deal of money being funneled into the financial aid budget, the rising costs of running a private school are forcing Urban’s tuition to constantly increase. What does this mean for the future of the school and its community, especially those who cannot afford full tuition?
Tuition increases are inevitable. In an interview with the Urban Legend, Shannon Cogen, chair of the board of trustees who also sits on the Finance Committee, explained, “This year’s increase reflects the costs to run Urban, which are driven mostly by salaries and the cost of tuition assistance.” Inflation also plays a part in tuition increases according to Cogen: “It costs more to afford the same things. In order to support our faculty, we need to pay them more, to keep up with inflation.”
“Tuitions have gone up between three to five percent each year for many years,” said Dan Miller, head of school. In 1985, the annual tuition was around $6,000, which was roughly 20% of the average household income in San Francisco at the time. Today’s tuition of $52,000 is approximately 38% of the average household income in San Francisco this year.
This is where financial aid comes in.
Approximately 30% of Urban students are on financial aid, and the average allocation is around 70% tuition assistance per student, which allows for diverse socio-economic backgrounds within the Urban community. This assistance includes support for books, field trips and other expenses.
Despite this financial support, Miller confirms that with compounded tuition, increases will result in a tuition of approximately $80,000 per year by 2032, and the average financial aid award will be around $55,000, around 70% of that $80,000. “Financial aid is locked in as a percentage of our tuition revenue, so as tuition goes up so does the financial aid budget proportionally,” Miller said.
However, because the financial aid budget increases proportionally to the tuition increases, the families on financial aid will ultimately pay more as well. Since the financial aid pot stays the same proportionally, the baseline amount that a family needs to pay still increases. For example, if the school offered someone 20% tuition assistance in the 2021-2022 year ($52,569 tuition), it would amount to a tuition of $42,055. That same 20% financial assistance in the 2022-2023 year ($55,197 tuition) would amount to a tuition of $44,158. “An exception,” explains Diane Walters, Urban’s chief financial officer, “is that for families who receive financial assistance of 93% or greater, the dollar amount remains constant for their years of attendance.”
It is not just families’ finances that are affected by these tuition increases. Malia Hillyard-Chow ‘24, a student on financial aid, highlights an issue: the change in the school community as the gap widens between those who pay full tuition and those who do not. “There are definitely people that are just oblivious to [those who are] on financial aid—[who] just do not understand,” Hillyard-Chow said. Kailene Apana ‘22, another student on financial aid and leader of the Financial Aid and Socio-Economic Status affinity space (FASES) said, “[Some students] can go on a spur of the moment trip to another country while there are others who are conscious of how many times [they] go out to Haight for lunch because they know they have to budget for the entire month.”
Tuition is increasing yearly, and with that comes increasing salaries and benefits to match inflation, funding to sustain school operations and money to put towards financial aid. But at what cost?
With the tuition continuing to rise, a family on financial aid will still need to be relatively well-off. As Apana said, “[The tuition increase] just further engrains the fact that a quote-unquote quality education is only for people who are rich.”