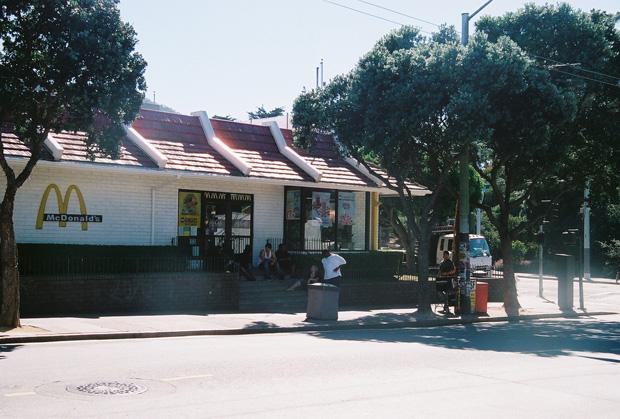 On a recent foggy afternoon, Angela Bryan sat outside the McDonald’s on Haight Street with a sign asking for money. But she wanted something more.

In August, the restaurant eliminated its dollar menu, including the side salad and the McDouble. The decision disappointed Bryan, who regularly eats at the restaurant.

“They need a value menu,” she said.

Items that used to sell for $1 now cost $1.49 except for the hamburger, which still costs 99 cents.

“There’s only one item on the Dollar Menu now, and it’s not even the double cheeseburger,” said Skie, a self-described street kid.

The owner of the McDonald’s at the corner of Haight and Stanyan streets says the motivation behind eliminating the dollar menu was strictly financial.

“Why I no longer offer menu items for $1 in this location was a business decision based on a number of contributing factors,” said owner Natalie Gonzalez in a written statement. “And while these items are no longer available at $1, they are still available at what I believe to be a good, everyday value.”

Gonzalez’ move is supported by McDonald’s corporate policy. According to the McDonald’s 2009 annual report, each franchise makes price decisions without permission from McDonald’s, but is associated with and pays fees to the corporation.

The report also argues that “franchising is important to delivering great, locally-relevant customer experiences and driving profitability.” Yet Haight Street regulars say the move to eliminate cheap eats does not match the McDonald’s manifesto.

“The franchise can sell whatever they want,” said a man named Ulysses, who said he arrived in San Francisco at the end of August. “What we want is the actual Dollar Menu.”

A man nearby, who called himself Speed Bump, agreed, saying that “sausage biscuits should be $1.”

Tensions are already high between Haight Street merchants and the homeless because of Mayor Gavin Newsom’s proposed sit-lie ordinance, on the November ballot. Interviews with several homeless people on Haight Street indicate that some feel that eliminating the dollar menu is in line with the proposed ordinance, which would give the police the ability to force citizens to move if they are sitting or lying down on the sidewalk.

“All I know is they took the Dollar Menu (away) because too many homeless and street kids were hanging out there,” said Skie, adding, “that’s bullshit.” Turning to a friend, Skie asked, “is it even legal?”

In fact, it is: According to state law, businesses can decide what they sell and for what price as long as homeless customers are not treated differently than other customers. Under the 1959 California Unruh Civil Rights Act, everyone is “entitled to the full and equal accommodations, advantages, facilities, privileges or services in all business establishments.” As long as a franchise eliminates the dollar menu for everyone, it is legally okay.

Urban students said that the fact that homeless people gather at McDonald’s would not deter them from eating there, nor would it encourage them to visit.

The elimination of the dollar menu comes after other changes in restaurant policy, patrons said. For example, last year, “there was free water,” said Ulysses, “but now you have to pay for a cup.” Bathrooms also are off-limits. “As a homeless person, they won’t let you in,” Ulysses said. ”You have to wait for a paying customer to catch the door after them.”

Bryan said she has to “stand in line and show a receipt” for a drink refill. But she added, “they are not being mean to us.”