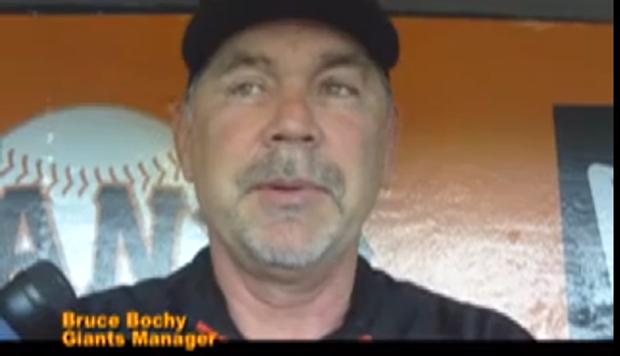 Fans filed into San Francisco’s AT&T Park on Sunday, Sept. 11 to watch their beloved Giants baseball team beat the L.A. Dodgers and to observe the 1oth anniversary of the terrorist attacks on America.

The opening ceremony began at noon and included a lineup of players and first responders around the Giants baseball diamond. On one side was the Giants team, and on another was the Dodgers team. The two remaining sides of the diamond were lined with San Francisco firefighters, police officers, deputy sheriffs, and pilots and flight attendants, all in uniform.

A gigantic American flag was marched out, unrolled, and held by civilians while the national anthem filled the stadium. In a symbolic gesture, Giants Manager Bruce Bochy placed a baseball on the little strip of white in the center of the pitcher’s mound.

“It was a special moment,” Bochy later told the Legend, in a post-game interview.

Each fan was given a “9/11 Remembrance Card” upon entering the stadium, which displayed the American flag on one side, and the name of a victim of the 9/11 attacks on the other. All of the victims’ names were listed in white text on blue and red tarps strung around the palm trees surrounding the statue of Willie Mays, Jr., outside the ballpark, located on Embarcadero between 2nd and 3rd streets.

A Columbian-American sportswriter named Luis Alberto Torres, who writes for a Venezuelan publication, explained how, despite his Latin-American origins, his allegiance belongs  unwaveringly with the United States on this day of national mourning.

“Columbia is corrupt,” said Torres. “This country is the greatest in the world (and) I’ve travelled all over … I would give my life for this country.”

The way Americans stood — silent, proud, and utterly respectful — during the 9/11 memorial ceremony and while singing the anthem was a counterpoint to the usual shouting and jostling during ballgames, and a reminder of the American dream to unite people of every color and culture against hatred and terrorism.