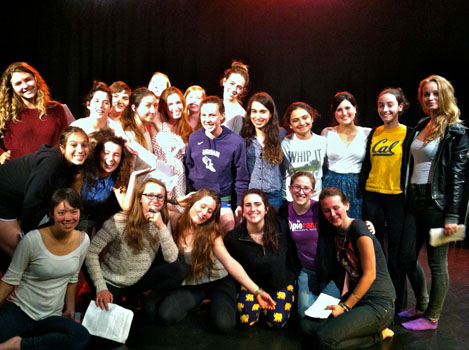 Cast of the "Swear Words" performance.

On Friday, April 20 at 7 p.m., Urban’s Students for Women’s Equality and Rights (SWEAR) club will perform its first official rendition of an original production, titled “SWEAR Words.” Performances include a matinee at 2:30 p.m. and a final show at 7 p.m. on Saturday, April 21.

Tickets are $10 for students, and $15 for adults, with proceeds going to Women’s Learning Partnership, “an international organization dedicated to women’s leadership and empowerment,” and Afghan Connection, “a non-profit working to improve girls’ education in Afghanistan,” according to the official show invitation.

Instead of producing “The Vagina Monologues,” a feminist ensemble play by noted playwright Eve Ensler, SWEAR decided to  stray from the three-year-old tradition and put on a show of its own.

Seniors Clara Hendrickson, Simone Hudson, and Gracelyn Newhouse — who were “the powerhouses of the project,” according to school guidance counselor Lilia Leshan — seek to influence the Urban community and beyond to “realize our strength as allies in the global fight for gender equality,” according to the invitation. The show will accomplish this by sharing stories written by female students at Urban as well as international voices, for example, in a poem by an Afghan woman. There are 26 student performers, but approximately 50 Urban students are working to produce the show.

Although — as many an Urbanite acknowledges — Urban is a safe environment for women to speak up about gender issues, many women around the world do not enjoy the same measure of autonomy or respect. For this reason, the show “seeks to help us realize our responsibility to all women,” said Hendrickson, as well as “to bring in women who don’t have the same resources and communities that offer a space for them to have a voice.”

Hudson and Hendrickson also said that the show offers a fresh perspective on feminism in a community that already regularly acknowledges the need for global women’s equality: “People are so sick and tired with everything in their English class being books about women and gender — they get tired of women as a subject,” Hendrickson said. “We want to bring a fresh take on the issue … It’s a whole bunch of experiences we want to bring to light.”

“SWEAR Words” touches on a variety of themes, including pornography, hook-up culture, rape, female anatomy, cultural absurdities and self-respect. One excerpt from a piece by Isabel Fife-Cook (’13), which did not end up in the final script, reads:

“I often wonder how many girls look down at themselves in the shower, naked as infants, surveying the distorted slopes and pouches of their bodies with the kind of passive disgust that we have grown so used to over time. Why has my careless impenetrability to these destructive thoughts dissolved, and when?”

The performance promises to be rife with such emotional acuity. According to Leshan, who is serving as Urban counselor while longtime counselor Kaern Kreyling is on sabbatical, “It’s an intense script.” She hopes that performers will “be there for people’s vulnerability, and at the same time, be there at an intellectual level, exploring all the different ideas, especially the personal-global connection.”