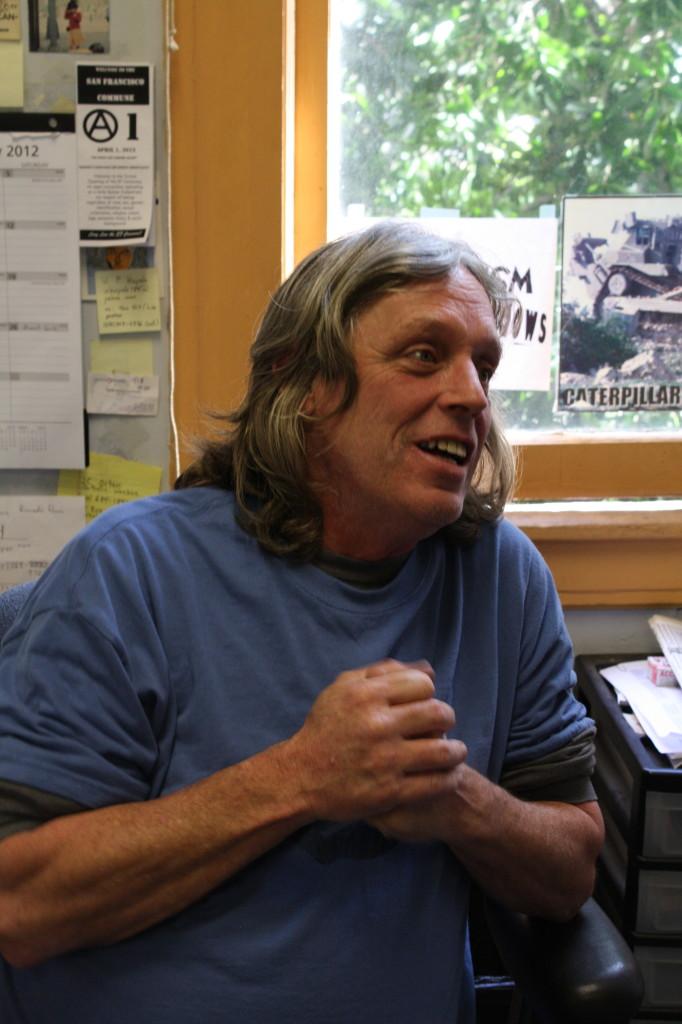 Activist Paul Boden talks about homelessness during an April 2012 interview at the headquarters of the organization he heads, the Western Regional Advocacy Project. Photo by Sonia Bartlett.

Homelessness is something America can end, and Paul Boden believes he knows how.

Living on the streets at the age of 16 — the same age as about a quarter of the students at Urban — was more than just a little tough, but Boden survived it. Now the organizing director at WRAP (Western Regional Advocacy Project), he works passionately every day to give the homeless the voice they need to change America.

WRAP exists “so (poor and homeless) people can start looking in the mirror and feel really good about what it is they are looking at,” said Boden.

“Once you start seeing that develop,” he added, “you know you’re gonna kick some ass.”

WRAP began as the brainchild of leaders from several advocacy groups, including Building Opportunities for Self-Sufficiency, the Coalition on Homelessness, Sisters Of The Road, Street Roots, and Street Spirit. Illuminating and eradicating the causes of homelessness was the first goal, though WRAP has grown to encompass National Action Days, where organized rallies take place in multiple cities, and professional reports, like their annual “Without Housing Report.”

“We do a lot of work trying to get people to realize that they are valuable, that they do have something to contribute,” Boden said. The mindsets that “you fucked up” and “you are fucked up” are the first things to eliminate, said Boden, who doesn’t hold back when it comes to swearing; he tells it like he thinks it is.

“If you tell poor people, ‘you’re lazy, you’re ignorant, you’re fucked up,’ then that’s what they’re gonna think, and it’s our job to turn that around,” Boden said. Intense and driven, he frequently runs his hands through his shoulder-length hair. “When you’re homeless, there’s a real sense of: ‘You fucked up.’ But yet there’s 3 million homeless people (in America). So we’re all fucking assholes?”

Boden, 52, was born in New York, and raised on Long Island. His mother died when he was 16, and his father sold his home and left Boden to the streets. “Getting a space to go to the bathroom sucks; constantly having to think about where you’re gonna sleep that night, where your stuff is, if it’s safe, how you’re gonna lug it around, (all) sucks,” he said.

Though Boden is no longer homeless — he lives in Bernal Heights with his wife of 18 years, Marykate — he’s not a person who seems to sit still for anything.

During an interview in the WRAP office, on 16th and Capp streets in the heart of San Francisco’s Mission District, he paces. He smokes cigarette after cigarette, stubbing them out before they are finished. He tugs at the cuffs of his cream-colored sweatshirt. Every inch of his shared office space is plastered with posters and artwork about homelessness. “Art gets the message across,” he tells a visitor.

So does attitude. “Once I devoted myself to saying ‘all right, you know what? I’m gonna get over my feeling sorry for myself and start worrying about the seniors and the little kids,” Boden said. “(I) started getting really pissed.”

Boden’s own middle-class roots also are a factor. “I also think that I wouldn’t have gotten so angry had I not come from a situation where, to me, it was okay to feel entitled,” Boden said. “(I thought) ‘yeah, I’m entitled to this shit. Why? Well, I’m a white boy in America. And I would demand of my government what I thought I was entitled to, and (what) I felt like everyone else was entitled to, too.”

When asked what those who have money and influence can do about homelessness, Boden answered that “The most important thing that people can do is to really start questioning the concept that housing and health care and education are commodities,” which have a price and thus are out of reach for some. “Like, why?” Boden asked.

According to WRAP’s “Without Housing” report, as of 2010 some 3.5 million Americans were homeless due to funding cuts and policy failures. Boden said solutions are possible, but that the country lacks the consensus to act.

“Our original hope when we did this report was that the information — because it’s so simple and because it’s true — that showing it to our elected officials and the assholes in Congress, they would see it and go: ‘Ah, wow, you know what, you’re right,’ because that’s what everyone else did when they read the report.”

But that didn’t happen. “It didn’t change anything, and the lesson that we learned from that is, you have to build that power to force the change,” Boden said.

One thing seems sure: This restless man won’t be taking a break anytime soon.

“What a fucking waste of your day if you didn’t learn something new,” he said. “You just wasted the whole day. You’re still exactly where you were the day before, so you wasted your day.”

In fact, it’s Boden’s idea for what universal education could be. “Why isn’t that embraced as: ‘Yeah, you know, as a government we really want to make sure that everybody is learning at least one new thing every day,” he asked, “whether they have money or not?”