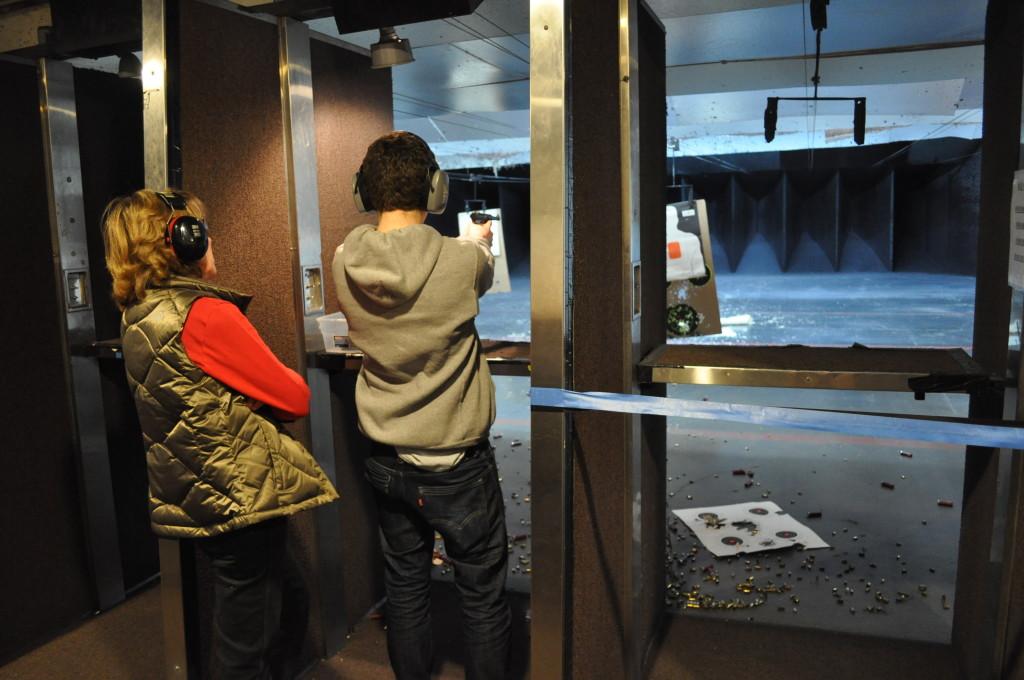 It was cool, but I was on edge. I felt powerful, but it wasn’t a good type of power. The main thought that circled my mind as I slowly became more comfortable with the Ruger Mark III Hunter Rimfire .22 caliber pistol resting in my grip at Bullseye Indoor Shooting Range & Firearms Store in San Rafael, where I stood alongside my father, my fellow editor-in-chiefs, and a safety instructor, was this: How would it feel if a bullet coming out of this gun hit me?

Obviously, it would hurt. But it took the action of actually firing a gun for me to fully understand its power.

It wasn’t just the deafening booms bursting through my earplugs and earmuffs as I stood and fired at the paper target. Nor was it the flash of light radiating from the nozzle as the bullet left the chamber. It was the inexplicable thrill that surged through my body as I fired each bullet. I liked it.

Gun violence and control have erupted into a national debate in recent months following the December shootings at Sandy Hook Elementary in Newtown, Conn., which left 20 children and six staff members dead.

Unlike most topics, this one hasn’t yet triggered me to develop a strong, definitive opinion on where I stand. I see pros and cons on both sides.

So I decided to separate myself from the philosophical and intellectual aspects of this heated discussion and instead focus on the experiential part. With a topic like gun control, it was hard for me to develop any feelings towards possible solutions without actually knowing what shooting a gun feels like.

We went twice, the first time being rejected because of a waiting list extending beyond the time available before the range closed, and the second time getting on the range after a 2 ½-hour wait.

“It was strange to be in a place that sells things that you associate with being illegal,” said King Fredel.

Siler added, “The shooting was exhilarating. The place was weird.”

The “Four Commandments of Firearm Safety,” which the range instructor presented to me during the safety demonstration, were as follows:

1.   Treat all firearms as though they are always loaded.

2.   Never allow the muzzle to point at anything you are not willing to destroy.

3.   Keep your finger off the trigger and out of the trigger guard until your sights are on target and you are ready to fire.

4.   Be sure you have an acceptable target, know its surroundings, and what is beyond.

It was commandment number two that reminded me of something important: The sole purpose of a gun is to “destroy” a target. That is why guns are made. Regardless of the purpose the individual has in mind when he fires a weapon, guns destroy things. Even if the gun is shot in a range, it does not change the nature of firearms. They destroy paper, they destroy targets, and they destroy people.

It’s hard for me to endorse something on any level, whether it is a pistol, a hunting rifle, or an assault rifle such as the AR-15 used to murder 26 school children and staff, with a goal completely oriented around destruction.

Over the past three years, I’ve written dozens of stories for the Legend, including editorials in which I’ve taken on tough issues such as race, prisons and religion.

Difficult as these issues have been to reason about, I’ve always reached a conclusion. But this time, there isn’t one. I don’t have an answer.