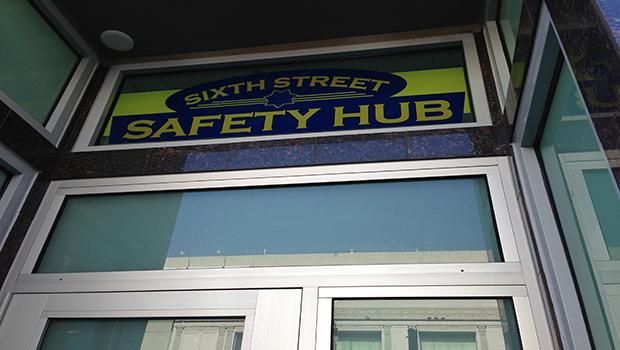 People became tense and confused as voices were raised on a recent Thursday at the Sonoma Market, a small grocery story in San Francisco’s Sixth Street neighborhood.

A man and woman were arguing while walking in and out of the storefront. There was a loud crash as the woman threw her bag on the floor before the man’s voice began to rise again.

But this time, before the scene escalated any more, two cops showed up outside of Sonoma Market, ready to sort out the trouble. Thanks to the new San Francisco Police Department Central Market Safety Hub, just across the street from the market, the foot police were able to show up before the fight got physical.

Walking around Sixth Street near the cross section of sixth of Market Street, one runs into countless scenes of people lying down and sitting around on the street, smoking or sleeping.

Even at 2:30 p.m. on a Thursday afternoon, the scene of Sixth Street is the same as it is at any time of the day or night. However, the new Central Market Safety Hub that opened on March 8 at 72 Sixth Street is already starting to revitalize the neighborhood.

According to the owner of Sonoma Market, there has already been change since the opening of the safety hub. Though he was too busy to talk, he said that the change is good.

It is situations like the one that took place in Sonoma Market that the new Safety Hub plans to resolve by providing quick, easy service to store owners and residents to stop arguments and fights before they get out of hand. According to Sargent Mark Shea, the Safety Hub “increases police presence on Sixth (Street)” and this “gives ease to store-owners” especially.

The Safety Hub, which was opened with a ribbon-cutting ceremony by Mayor Ed Lee, is in an area with a history of trouble. According to SFPD Chief Gregory Suhr, the city hub was built in response to requests they have been receiving from people living both in and out of the neighborhood.

The plan for an increase in safety has been on Mayor Lee’s agenda ever since he took office. The goal of the safety hub is too help transform the neighborhood. As Lee put it on SFmayor.org, the Safety Hub “marks another milestone in our continuing effort to revitalize and transform the Central Market neighborhood.”

The Safety Hub alone brought up the number of foot beat officers up from 16 to 24. Already, the increase in officers seems to be helping, according to a March 12 article called “Tackling Crime Near 6th Street Substation” on the San Francisco Chronicle’s website at sfgate.com.

However, safety is just one way the Safety Hub will reshape the area. According to SFmayor.org, the new building will also give support to the Department of Public Health through Project Homeless Connect. The building will house some of the neighborhood prosecutors, and the building itself with be open from 6:30 a.m. to 10:30 p.m. every day, allowing easy access to those in the neighborhood.