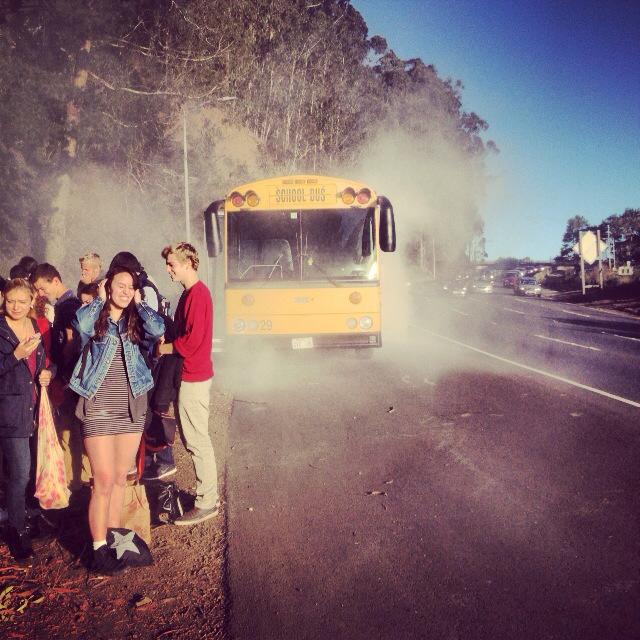 Urban students on Tuesday morning stand on the side of the Redwood Highway, north of the Rainbow Tunnel that leads to the Golden Gate Bridge. Students were asked to evacuate the bus after an engine fire caused smoke to appear from the back left of the bus.

The daily commute from Marin to The Urban School of San Francisco proved problematic for approximately 30 students on Tuesday when a bus engine caught fire, leaving students stranded by the side of the highway north of the Golden Gate Bridge.

As the Marin bus slowed to a stop at approximately 7:40 a.m. on the side of the Redwood Highway prior to entering the well-known Rainbow Tunnel, students were less overcome with fear and more relieved at the excuse to miss school.

But relief was soon replaced by worry over smoke that appeared from the back left of the bus. After glancing outside, the driver quickly instructed students to get off the bus, remaining calm yet expressing the urgency of the situation.

“The wire from the battery to the alternator shorted out” Marty Rea, CYO Transportation’s general manager explained. “Because of the short, it caused wires in the same loom to melt, therefore causing smoke, which the driver extinguished to prevent from spreading to other wires.”

Grabbing the fire extinguisher, the driver, whose name could not be immediately confirmed, rushed to the rear of the bus, where the engine is located, and extinguished the growing engine fire.

Within minutes, two police officers arrived at the scene. Students waited alongside Redwood Highway as news helicopters circled above. After 40 minutes, students were retrieved from a second bus while the first was being hitched on to a tow truck. They arrived at school at approximately 8:45 in the morning.

“I wasn’t scared, because the situation seemed under control and the bus driver knew what he was doing,” said Alex Hoskins (‘16).

However, as news broke of the incident, concerned parents called students to inform them of the live footage being broadcasted on two local news channels.

Cbslocal.com, the website of the CBS affiliate in San Francisco, published a story displaying a stock photo of flames, not taken at the scene, which blew the experience out of proportion and sparked unnecessary worry.

Students were less anxious when they explained the experience.

“I didn’t feel in danger, because our good bus driver told us what to do in a calm fashion and then he busted out a fire extinguisher like a hero,” said Zach Welsh-Retzlaff (‘16).

“I didn’t feel in danger. It was too early in the morning to be scared,” said Pavel Lunin (’15). “I just followed the directions.”