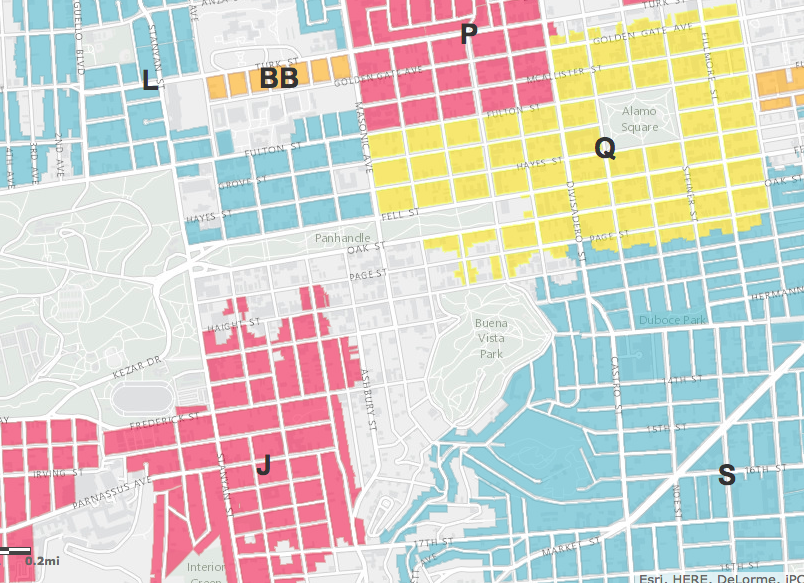 The Haight is surrounded by different residential parking permit areas.

The Urban School might be expanding, but its parking options are not, at least for now. Since last school year, the north campus construction, a recent residential parking permit in the Alamo Square neighborhood, and San Francisco’s street cleaning schedule have brought in more cars to an area with fewer spaces to hold them.

Only about thirteen percent of the student body lives in Marin according to the Urban School website, but many of the students who drive to school come from across the Golden Gate Bridge. For Gabi Gotts (‘17), the Marin bus, which picks up and drops off in both San Rafael and Mill Valley, does not work for her schedule; for Leo Danzig (‘16), running a carpool is more cost-efficient than the bus’s round-trip fare of $2,750 for the 2015-2016 school year. Sam Johnson (‘16), a Marina resident, drives to school because “driving just (feels) like a more efficient way to get (to school) faster and home faster.”

Both students and faculty have noticed the causes, and felt the effects of a more limited parking situation. Cyrus Rosenberg (‘16) said, “(Parking) is the worst hellish nightmare from the deepest, darkest corners of my psyche.”

Urban’s construction across Page Street has made unavailable the staff parking lot. Larkin Levine (‘17) said, “Because there is not only construction at Urban, but construction at a bunch of homes around the Haight … it creates a lot less space.” She is referring to the fact that there are approximately six construction sites that are either active or approved by the city within a five-block radius of the school listed on the website of San Francisco’s Planning Department.

Beginning Sept. 1, a new “Area Q” residential parking permit covers a 50-block area between Masonic and Webster, Golden Gate and Page, according to Hoodline.com. The zone was approved unanimously by the SFMTA, and it restricts anyone without a permit to two-hour parking for most of each day, with official enforcement beginning on Sept. 21. While Area Q is the most recent residential parking permit in the area, the Haight is also neighbor to Areas L, BB, P, S, and J, which all limit parking options.

Rosenberg said that street cleaning has also limited Urban’s parking, and he does not like it: “Streets are walked on and driven on they don’t need to be cleaned every week. They just get dirty – it’s Haight Street – like, people could poop on the street, I don’t care, like I’m just driving on them.”

“When the chips are down these students will eat each other,” Rosenberg said, referring to the behavioral changes that the Urban community has undergone due to more difficult parking. “I have fought people for their parking spaces. People have fought me for their parking spaces and there’s this underlying jealousy.” “It feels like the only thing people talk about,” said Levine. Most interviewees had a story about being late to school, or having a flustered morning due to parking.

Many of those that drive to school have had to change their habits this year. Students are waking up earlier, in order to leave earlier, in order to find a parking space earlier, in order to make it to school at the same time. Additionally, many of the open spaces that drivers find are further away from school. However, neither of these aspects to the new situation are purely negative; Gotts said, “I actually really enjoy getting here earlier. I love going across the bridge when it’s just the commuters … there’s fog and it’s early dawn, and I love that feeling.”  Danzig said, “Parking further away isn’t necessarily a problem.” A carpool is useful, Levine said, because, “Having other eyes makes it so much easier.”

In addition, even though the staff parking lot is unavailable, faculty can get a permit to park in the Kezar lot. Greg Monfils, English and history teacher said, “It means a 15 minute walk for one school year. No problem.” According to Diane Walters, chief financial officer , when the north campus construction is done at the beginning of next school year, there will be approximately 80 spaces as a part of the structure, though it will still only be for faculty and staff.

But don’t worry, said Gotts: “There is always a space for you somewhere, and as soon as you realize that, it’s fine.” And, according to Dan Murphy, “The garage bike parking is still working.”