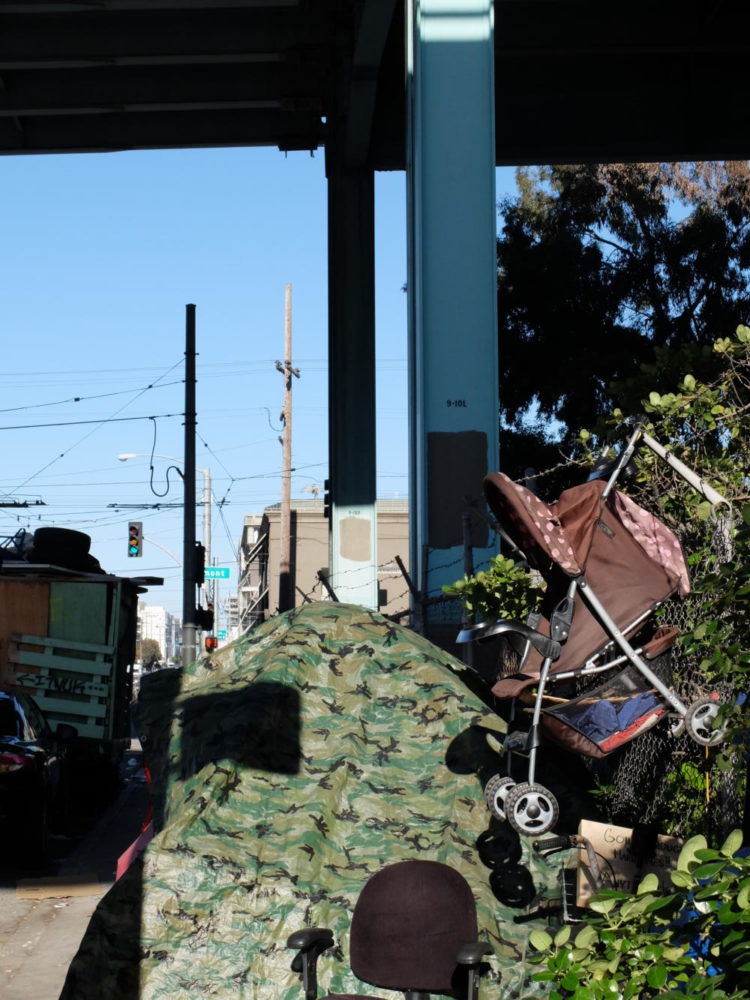 Photo of a homeless encampment by Olivia Meehan, Head Photographer.

According to Investopedia, San Francisco is the second most expensive city in the United States. According to The American Council on Science and Health, it’s also home to one of the biggest homeless populations. In an interview with Jeff Kositsky, San Francisco’s first Director of Homelessness and Supportive Housing, he said that with over “6,500 single adults experiencing homelessness on the streets and 4,500 unsheltered,” San Francisco is severely lacking in services for both those experiencing homelessness and those who are chronically homeless. According to San Francisco’s Department of Public Health, the shelter waiting list tops 900 and the homeless population is closer to 10,000. Prop Q, which passed in 2016’s November election, gives city officials the authority to ask homeless people to remove their tents off of city sidewalks. If the tents aren’t removed after 24 hours, the city can remove all of the found property and post a sign at the tent’s location that describes the found property and where it is being stored. The proposition also requires the city to provide written notice 24 hours in advance, provide shelter for all previous tent residents and give money if these residents need to travel in order to stay with family.

Before the proposition was proposed, according to San Francisco city law, the “obstruction of city sidewalks,” was prohibited, as was lying or sitting on public sidewalks between 7:00 am and 11:00 pm. City law allowed the removal of “unsanitary structures,” but didn’t prohibit tents. As more and more tent cities popped up in many San Francisco neighborhoods, the city began to receive an increasing number of complaints as city residents found encampments obstructing their sidewalks and street corners. San Francisco Supervisors Malia Cohen, Mark Farrell, Scott Wiener and Katy Tang supported the proposition, which put it on the November 2016 ballot. Supervisor Mark Farrell encouraged San Francisco voters “not to incentivize or institutionalize tent encampments but instead prioritize housing and shelter as the alternative,” and to vote yes on Prop Q.

According to the SF Chronicle, tent encampments can range from three tents along a public side street to camps with reportedly 350+ residents and even a “slum-lord,” who controls the area, says New York Times writer Daniel Duane. Most commonly found below underpasses and covered areas, these tent cities grow during seasons of heavy rainfall. This past fall, many of these encampments grew in size and visibility, spreading to some of San Francisco’s more affluent neighborhoods.

52.8% of San Franciscans voted yes on Proposition Q, meaning that it is now legal for city officials to remove homeless encampments in San Francisco. The problem lies in the implementation of this proposition, as the shelters that the city is supposed to supply sometimes have waiting lists of over 1,000 people (for a 90-day bed). Proposition Q aims to remove San Francisco’s tent cities, but many feel it offers insufficient alternatives and shelters.

Opponents to the proposition stated that due to the fact that there is limited to no shelter space, the 24-hour regulation will not be implemented and the proposition will fall short of its purpose to clean up San Francisco streets. While Proposition Q has potential to clear city sidewalks, with less than 1,200 shelter beds for the city’s homeless, the tents currently remain and a few months after its passing, there seems to be little to no change in the homeless situation. According to city officials, the encampments are still growing and many have simply relocated after being asked to break up.

The Urban School of San Francisco is located in the Haight, an international destination for youth who come seeking “refuge from all kinds of circumstances, makes it a common destination for the younger homeless population,” said Homeless Youth Alliance founder Mary Howe. Programs like Taking It To the Streets SF work in the Haight and invite young people who are struggling with homelessness to help clean up their own neighborhood in exchange for mentorship, job training and a place to stay.  Programs like these help make a dent, but the homeless population around Urban and in San Francisco is growing. According to an article by Dr. Reese Halter, an eco-stress physiologist, San Francisco received more rain in the first eight days of January than it did in all of 2013, forcing many homeless people to seek shelter from the elements.

The Urban School’s doorways and alcoves are a popular waiting space for students, but Urban also shares them with many homeless in the Haight who use them as shelter on cold or rainy nights. Katie Catassi, Urban’s Facilities Manager, stated that “according to signs posted near the main entrances, Urban’s policy is that homeless people are not supposed to sleep under the doorways.”

Javier Lopez, who is also in charge of facilities and one of Urban’s crossing guards, has started to wake them up around 6:30 when he arrives at school, as he says it “often takes people a while to pack their things and move out.”

Catassi expressed that while people are usually nice, “they often leave cigarette butts and dangerous trash on the property which poses a danger to the students.” The direct effects of Proposition Q in the Haight are hard to measure as tents were never very popular. Catassi said that “the struggle isn’t over,” as prevention methods have been tried and failed. In fear of making the school look like a “prison,” Catassi said that they wanted to steer clear of barring the doorways. For right now, according to Diane Walters, Urban’s Chief Financial Officer, Urban’s practice is to “wake them and move them,” before students arrive at school. Problems of homelessness extend beyond Urban’s property, as propositions like Prop Q seem to have limited real effect. Whether sleeping on friends couches or sleeping in tents on Market street, San Francisco’s homeless population has many forms and is a diverse group of people. According to the Beyond Homelessness project led by the SF Chronicle, the homeless population is getting older and the number of people who have experienced homelessness for over a decade is increasing as well. While the homeless population is getting sicker, older and living on the streets for longer, the overall numbers are slowly but steadily decreasing. Prop Q aims to make these people less visible, but San Francisco is still deeply lacking in services for its large population of homeless people.