In the middle of The Urban School’s fall trimester, the San Francisco sky filled with a haze of smoke and ash, the locally visible impact of the Napa Valley fires that have destroyed over 7,500 buildings according to the Los Angeles Times. This disaster hit far closer to home for Urban than other recent natural disasters – on October 13th, San Francisco’s air quality reached levels as poor as those of Beijing– but some in the Urban community were harmed by the fire in ways far more severe than a claustrophobic haze.

Steven Dinkelspiel, an Urban parent and board member, described his family’s experience trying to find his stepbrother, Jim Conley, after receiving the news that Conley’s house had burned down.

“I was really amazed and scared by how big [the fire] was, but I just assumed that my step brother had gotten out and that we just couldn’t reach him because the phones were out,” Dinkelspiel told the Legend. “I was calm because I couldn’t believe that he would be in danger; you don’t hear about fires moving faster than a neighborhood evacuation,” he said.

The fires, however, moved far faster than Dinkelspiel had expected. “We found out the next day that he was in the hospital in Santa Clara. We’d been transferred there and we didn’t know if it was him– Jim Conley’s a pretty common name,” he said.

The hospital told Dinkelspiel and his family that Conley couldn’t talk and was in critical but stable condition, and asked if he had any distinguishing features. Dinkelspiel couldn’t think of any. “Then my wife told me something I’d temporarily forgotten: ‘he doesn’t have any teeth,’” he said. The Santa Clara hospital confirmed that the man they were holding had no teeth, so Dinkelspiel and his sister Frances, a journalist at the Daily Beast, drove to Santa Clara.

“He was on painkillers, he was burned pretty significantly. But luckily, within about 24 hours, we knew that his throat hadn’t been injured, because you can be hurt by inhaling the fumes,” Dinkelspiel said.

Complicating the situation, Conley has little to no online presence according to his stepbrother.

“We couldn’t apply for MediCal without a birth certificate. He was on Medicare and we needed a power of attorney, so we needed a notary to authorize me as power of attorney, but all his documentation was burned up in the fire. It took us the whole week to get the birth certificate. The DMV can’t issue ID unless the person is present– actually, they will come to a hospital, but it takes four weeks and he’s home now, so that ship has sailed. This all seems silly, but just getting a piece of paper that allows him to replace his ID is a hassle and a half.”

Even as the state bureaucracy frustrated Dinkelspiel, the Urban community came to his stepbrother’s aid. “There were three Urban people, all on a Facebook chat trying to coordinate and trying to find him,” Dinkelspiel told the Legend. “And once we made a post explaining the situation and linking to an Amazon wishlist, we got a great response from people around the country, including several people from Urban.”

According to Dinkelspiel, the school’s community can come together in trying times like the North Bay Fires and show that connections in the Urban community extend far beyond high school itself. 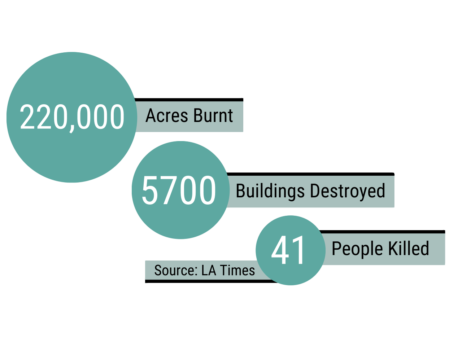