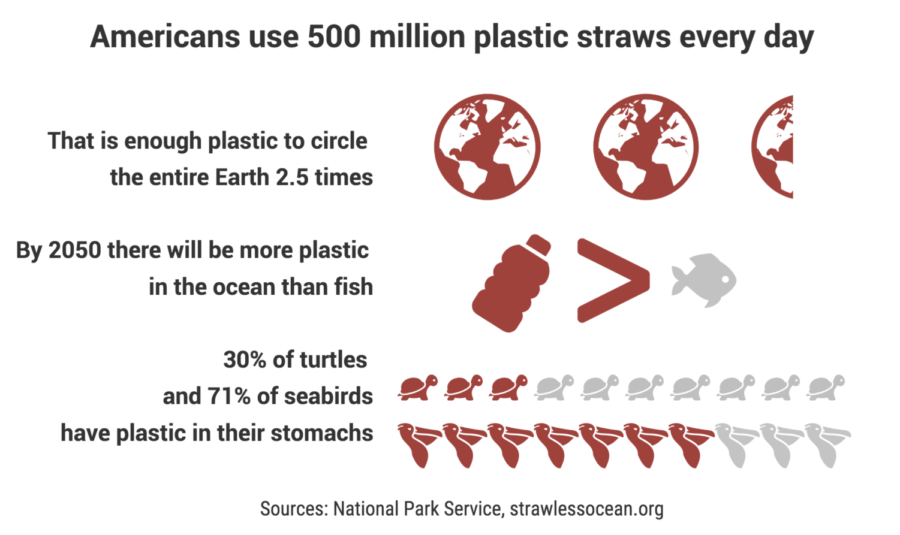 Every time someone purchases one of these refreshing drinks, they are also purchasing a straw. Set to come into effect in July 2019, San Francisco’s newly passed plastic straw ban will make the usage of plastic straws in all stores and restaurants illegal.

The city of San Francisco has gone a step further than the recently passed statewide ban by eliminating the use and sale of plastic straws in both restaurants and shops. Proposed by Democratic Assemblyman Ian Calderon, California’s ban is a first step towards eliminating the plastic waste that litters the streets and oceans. Like the strategy employed to limit water use during California’s drought, the statewide ban makes it illegal for restaurant servers to provide plastic straws unless requested. If employees don’t follow it, they risk a fine of $1000 or jail time. In an interview with USA Today in late January 2018, Calderon commented that “We need to create awareness around the issue of one-time use plastic straws and [their] detrimental effects on our landfills, waterways, and oceans.”

While environmental activists and lawmakers support the ban, local businesses have publicly communicated the difficulties it may present, particularly for boba tea shops. While drinks like iced coffee and soda can be consumed without a straw, the tapioca pearls that make boba tea so appealing can only be consumed through a much wider straw than the standard one. This makes finding alternatives to plastic straws much more difficult for boba tea business owners.

Boba Guys, a popular San Francisco boba tea shop with six locations across the city, signed and supported the legislation despite understanding the negative impact it would have on their sales. Other local boba shops also point out the economic difficulties that the ban presents.

Clifton Barrett, general manager of newly opened Bing and Boba on Haight street, hopes that the law will reduce people’s carbon footprints, but said in an interview with the Urban Legend that “We also need to get to the deeper questions: are [lawmakers] going after the companies that provide plastic straws? Before you just cut people off and their businesses, what alternatives are you going to give?” Ultimately, the ban affects small, and often minority-owned, businesses such as boba shops instead of big companies that are producing larger amounts of plastic waste.

Students in the Urban community are also taking action around plastic waste. Green Team, a group of students who promote sustainability at Urban, have talked about how students and faculty can support the ban by eliminating the use of other plastic products around the school.

In an interview for the Urban Legend with Green Team members Melia Fillipow ‘20 and Maggie Carney ‘20, Carney said that “Our big thing that we’re working on right now is the plastic water bottles from Flik, because they’re used a lot, and then they’re wasted.” Carney said that Green Team is currently in conversation with Flik to address this issue.

Fillipow added that “[While] we don’t want to take money away from Flik, we also want to promote sustainability.”

Despite the challenges it presents for small businesses, Boba Guys acknowledged the importance of the ban in a blog post on their website, saying, “no single boba shop can take on the risk [of stopping the use of plastic straws], but one single boba shop and their community can surely start the movement.”