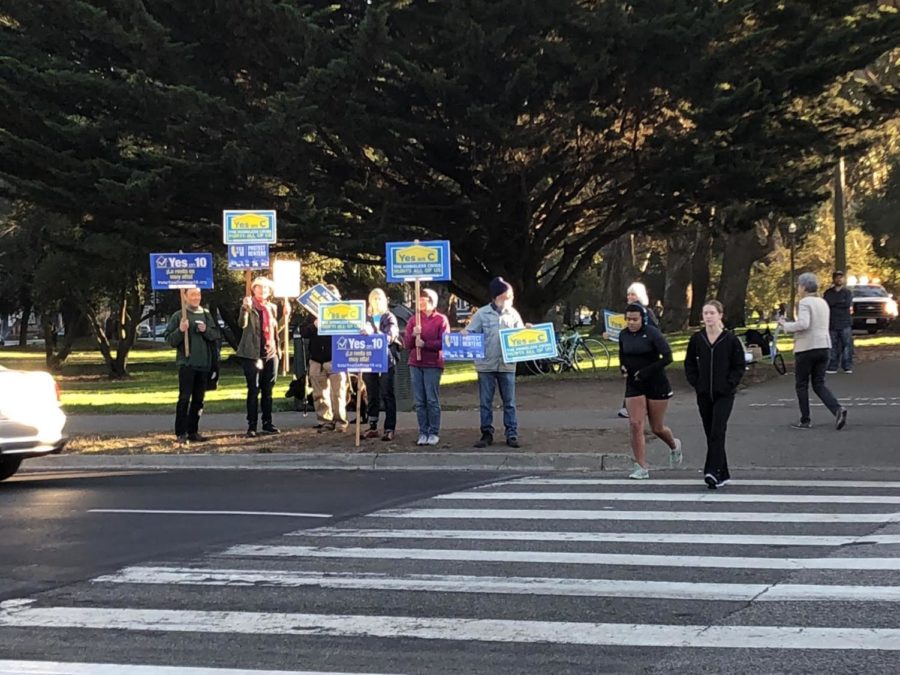 Supporters of Prop C near the Urban School. By Phoebe Grandi, Visuals Editor.

On Nov. 6, 2018 San Francisco voters passed Proposition C to tax the city’s wealthiest businesses in an effort to increase funding for homelessness prevention. The proposition is projected to raise $300 million annually, nearly doubling the current homelessness budget of $382 million.

With Proposition C in place, every business with a gross receipt—which approximates the company’s total revenue—of over $50 million will be taxed an additional 0.5% to generate the funding. The funds will be divided between existing homeless shelters and mental health facilities and will subsidize construction of long-term affordable housing units.

Proposition C passed by a wide margin and was supported by 61.3% of voters. Although it only required a simple majority of votes in order to pass, Prop C will likely face lawsuits claiming that any measure raising taxes require a two-thirds majority to be legally enacted.

Salesforce CEO Marc Benioff spearheaded the campaign in favor of Proposition C. Benioff individually contributed over $7 million to the “Yes on C” campaign, urging voters to force wealthy businesses like Salesforce to pay for homelessness prevention efforts in San Francisco. Benioff continuously expressed his support for Proposition C on Twitter, ending his messages with the tagline “Big Business Like Mine Pays, You Don’t.”

Opponents of the proposition claimed that it lacks accountability, detailed planning, and a performance benchmark necessary to ensure that the funding it produces is spent properly. An article published on the “No on Prop C” website stated that the condition of homelessness in San Francisco has remained unchanged since 1999 despite repeated funding increases. The article did not provide statistics to corroborate this claim. The article then urged the city of San Francisco to develop a more coordinated plan instead of “throwing more dollars at the problem.”

Another concern voiced by critics of Proposition C is its potential effect on San Francisco’s middle class. They worry that the tax on businesses could prompt a corporate exodus from San Francisco, removing employment opportunities from the local job market.

The argument against Proposition C garnered substantial support from many political figures in San Francisco, including Mayor London Breed. Although Breed has asserted herself as an adamant supporter of the effort against homelessness in the past, she vocalized her opposition to Proposition C in a public statement released on Oct. 5. In the statement, Breed claimed that “addressing the homelessness crisis on the streets is my top priority.” However, she found numerous issues with Proposition C, citing San Francisco’s historical failure to audit spending on homelessness and the proposition’s inability to provide systemic changes to the city’s approach to the problem. Breed concluded her statement by writing that “we need a consensus homelessness measure, funded by business, built on data, with reliable funding and accountability for its use. Unfortunately, Proposition C is not that measure.”

Proponents of Proposition C deny that the measure lacks detailed planning. Substantiating their claim that budgeting has been carefully arranged, the web page for “Yes on C” outlines a plan for distributing funds throughout the city. The plan was formulated to carry out the goals set by San Francisco’s Department of Homelessness and Supportive Housing’s (DHSH) strategic framework and will dedicate funding to organizations taking action against various issues contributing to homelessness. According to the “Yes on C” website, Proposition C will provide mental health care and drug addiction services to 4,500 individuals, subsidize construction of 4,000 units of affordable housing, and provide homeless shelters with 1,075 new beds.

Although Proposition C technically passed, the proposition did not muster the two-thirds majority typically required for tax increases. As a result, the measure will face lawsuits claiming that it cannot legally be implemented. This delay to the implementation process means that questions about Proposition C’s impact on homelessness are likely to remain unanswered in the immediate future. In an interview with The New York Times, “No on C” spokesperson Jess Montejano said,“The ‘Yes on C’ campaign failed to earn two-thirds support, and as a result, San Francisco stands to never see a penny for what Prop. C promised.”

Like many opponents who have set their initial disapproval aside since Proposition C passed, Breed released a public statement in support of the measure on Nov. 7, one day after it passed. In the statement, Breed said, “I have already had conversations with both proponents and opponents of Prop C about coming together to work on this issue as one city, and we can and will do just that.”