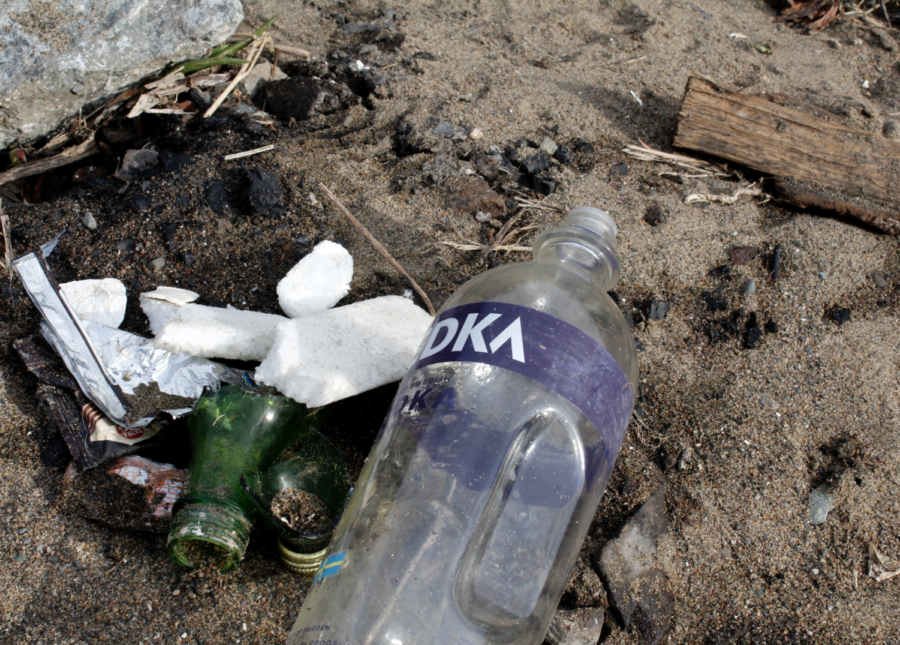 Trash on the beach at Fort Miley, San Francisco, on Jan. 26. By Tallula Ricciardi, Arts and Culture editor

From midnight on Dec. 22, 2018 until Jan. 25, 2019, the United States government experienced what turned out to be the longest federal shutdown in history. The 34-day government shutdown began because the U.S. Congress and President Trump could not come to an agreement on an appropriations bill to fund federal operations for the 2019 fiscal year—the most discussed funding request being the $5.7 billion for a U.S.-Mexico border wall.

As a result of the gridlock in negotiations, nine major departments were partially or fully shut down. Although the shutdown technically affected only one-fourth of government operations, it involved roughly 800,000 government employees who were either furloughed—a temporary leave of absence decided by one’s employer wherein employees are not paid—or required to work without pay. Now that the government is temporarily reopened, the Congressional Budget Office has estimated that the shutdown cost the American economy at least $11 billion.

Democrats and Republicans who opposed the shutdown passed multiple bills in an effort to reopen the government, but President Trump denied every bill that did not include full funding for the border wall. In the third week of the shutdown, House Speaker Nancy Pelosi and Senate Minority Leader Chuck Schumer met with President Trump in the White House to discuss the funding stalemate. According to CNBC, Pelosi summarized how many congress people felt about the shutdown, saying, “[Trump] has chosen a wall over workers…The president needs to end his senseless shutdown and reopen the government.”

While the shutdown continued without any resolution in sight, Trump claimed that he “[could] relate” to government employees who were struggling to pay their bills. The President said, “[government employees] are terrific patriots and a lot of them agree with what I’m doing.”

Despite the unlikelihood of any agreement between President Trump and Congress, 21 days after that meeting in the White House, Trump signed a short-term funding bill that reopened the government for three weeks to enable government negotiations. The shutdown temporarily ended on January 25, 2019 with the potential of beginning again three weeks afterward, on Friday Feb, 15, 2019,

On Monday, Feb. 11, 2019, congressional negotiators “reached an agreement in principle” over the border wall negotiations, according to Senate Appropriations Committee Chairman Richard Shelby R-Ala. The deal includes $1.375 million in funding for the U.S.-Mexico border barrier–enough to cover 55 miles along the Southern border–as well funding for approximately 40,520 detention beds for detained immigrants. If this deal passes–which would require house Democrats to waive the 72 hours for review of legislation rule–the government could avoid another partial shutdown.

Although the shutdown has ended, federal employees continue to feel the lasting effects of the 34-day shutdown. The Bay Area community supported federal employees by offering free meals, cleaning up the parks, and giving out short term loans. However, even with these supplements, federal employees were struggling to make ends meet and continue to feel the effects. While the majority of federal workers who did not get paid during the shutdown have now received their back pay, for many, missing two paychecks forced employees to tap into their savings or take out loans. According to a Marketplace article, Bruce McClary of the National foundation for Credit Counseling “estimates that about a third of those who borrowed [money] during the shutdown will wind up carrying some of the debt… into the future – especially if they already had debt.”

Former federal worker for the U.S. Department of Labor and Bay Area native Alfredo Nodal, who requested not to be recorded during our interview, spoke to the Urban Legend and shared insight from his 27 years in government. Although Nodal retired in April of 2018, he had previously experienced the 21-day 1995 Clinton-Gingrich shutdown. He recalls not being allowed to report for work and not getting paid until the government reopened. Nodal added that in his opinion, those being most negatively impacted are the taxpayers and the general public, even more so than the government employees. The shutdown prevents welfare and subsidies programs from providing money and assistance to Americans.

Another government employee, Jimmy Michaels,* has been working for the Internal Revenue Service (IRS) for nearly ten years. Following the December shutdown, he was immediately furloughed and declared nonessential. Michaels told the Legend that compared to his previous experience with the 2013 shutdown under the Obama administration, he didn’t see any major differences. He said that the previous shutdown was not as extreme but still damaging. However, Michaels said “this time around seemed more unpredictable… we didn’t really know [what to expect] in terms of how long it would last.”

Michaels believes that the government will shut down again on February 15 when the conditional reopening ends. During the 34-day shutdown, many coworkers of Michaels had to get temporary jobs to make ends meet. In Michaels’ case, because he is a permanent federal employee, he is guaranteed back pay for the furloughed period. However, Michaels said that “there are tons of contractors and other people who don’t work directly for the federal government, but are contracted through another company to the federal government and most of them are guaranteed no back pay.”

Both Nodal and Michaels believe that the shutdown is an ineffective negotiation method. Michaels said “it’s damaging overall because even the economy is suffering…I don’t think it really benefits either side and I don’t think it’s the right way [to go] about trying to get your way.”

*Name has been changed to maintain anonymity