Agreement reached after Oakland teacher strike, but is it enough? 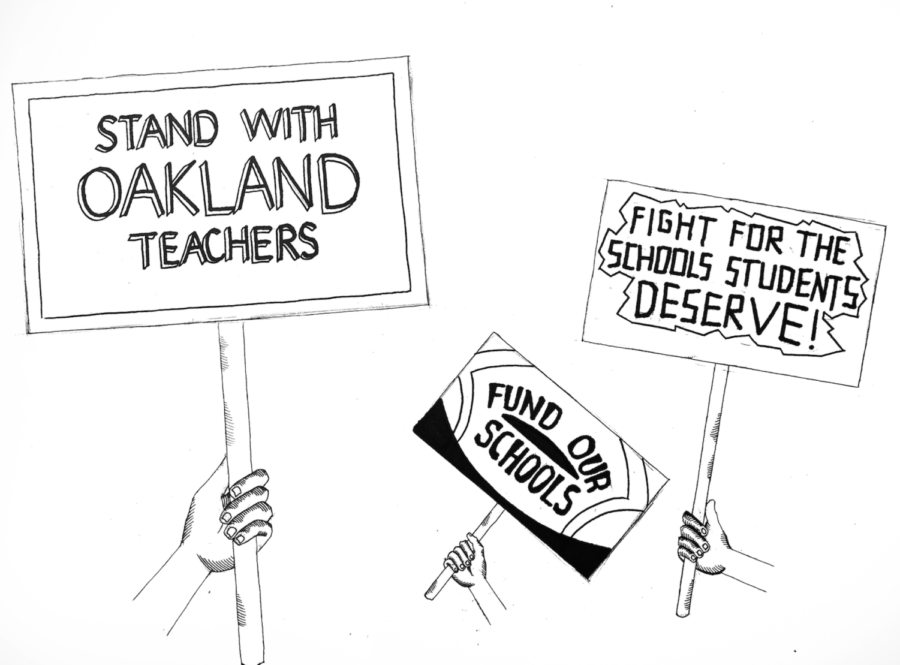 Illustration of signs by protestors in the Oakland teacher strikes, by Loki Olin, Features Editor

On Feb. 22, 2018, West Virginia teachers began a strike that would last 14 days and inspire a nationwide wave of teacher strikes in Colorado, Arizona, Oklahoma, North Carolina and California that would continue into 2019. Oakland teachers walked out of school on Feb. 20, 2019 and began a seven-day strike that would be resolved with the promise of, most notably, 11% pay raises for teachers over the course of four years and a slight decrease in class sizes.

The strike followed an 18-month negotiation between school officials and the teacher union for, among other things, higher pay—at least enough for teachers to be able to afford to live in the increasingly expensive Bay Area.

With this and other goals in mind, the Oakland community came together to support the teachers over the course of the seven-day strike. Shona Armstrong, a parent of three students at Oakland public schools, was active in the strikes and said in an interview with the Urban Legend, “It felt super inspiring because it felt like the whole community was on strike, not just the teachers.”

The strike ended when the teachers voted to make a deal with the school district, which agreed to hire more school counselors, psychologists, and special education teachers as well as provide school nurses with bonuses and pay raises in an effort to attract and keep nurses at schools, according to an article in Vox.

While beneficial for many, some Oakland teachers were unhappy with aspects of the resolution. According to Joshua Nardie, a teacher at Fremont High School in Oakland who teaches construction in a career and technical education program, teachers were hoping to obtain “smaller classes, better student supports, better [teacher] pay, and to end school closures.” Though the school district made many steps towards these demands, the resolution to the strike was tentative, as class sizes were decreased by only one to two students, and the district refused to cancel its plans to close around two dozen of the 86 Oakland Unified School District (OUSD) schools in the next 5 years, in an attempt to fix the budget crisis.

“The public education system is fundamentally broken in California, and the gains made can hopefully begin to address the drastic budgetary shortfalls facing educators and students,” Nardie said. Still, while the changes made in the strike’s resolution were useful in the short term, Nardie added that “11% over four years does not even keep up with inflation, so the teacher retention crisis will persist.”

While Nardie is not completely satisfied with the outcome, he recognized that “the district has suffered from decades of mismanagement and cuts from the state, so the current leadership cannot be blamed for everything.”.

However,” Nardie said, “school board campaigns are funded significantly by billionaires bent on ‘reforming’ education in ways that undermine unions and public schools. I do not think they have evil intentions, but the effects are dismal.” Nardine is referring to the rise of charter schools at the expense of public education funding.

Tamar Breines, an 8th grade student at Claremont Middle School, a public school in Oakland, said that, “I think it is really good that the strike happened, because the teachers are just trying to get what they deserve, but at the same time OUSD doesn’t have that much money and the teachers were asking for [11% raises], so it was a lot to ask for because OUSD doesn’t have much funding to put towards the raises.”

It’s true: aside from the fact that OUSD has been accused of misspending their money, California schools receive incredibly little funding from the state compared to those of other states. In fact, according to a fact-finding report by the Oakland Education Association, California ranks in the bottom quartile nationally in terms of per-pupil funding. According to the OUSD website, California ranked in the top five states for per-student spending prior to the 1970s. In 1978, however, Proposition 13 was put in place, which limited the collection of property taxes (a primary means of public education funding). Within a year, California dropped to 44th in the country in terms of per-student funding.

In the 2018-19 school year, California schools received a total of $97.2 billion in funding: 58% from the state, 32% from local sources, including property taxes, and 9% from the federal government, according to the Public Policy Institute of California. While the almost 100 billion dollars in funding may seem like a lot, this money gets distributed between the roughly 1,000 school districts within the state of California, leaving an estimated 1.16 million dollars to fund the 86 OUSD schools.

Given the deficiency in funding, it is no wonder that Oakland teachers are underpaid and that low teacher pay was a main subject of the recent strike. According to the website “Compass,” a living wage for a single adult living in Alameda County is $56,505—much greater than the starting salary of $46,500 that Oakland teachers receive, according to New York Magazine. In the Bay Area, where the cost of living is at least 49% greater than the national average, this is often not enough to afford necessities. As an often direct result of this low pay, the Oakland Teacher Union stated that one in five teachers leave the district each year.

Often, when strikes such as this one occur, groups are pitted against each other. In an interview with the Urban Legend, Sara Stone, Superintendent of 19 Oakland public schools and an Urban alum, explained her role during the strike as someone who is often depicted as being against the teachers. “You [were] not allowed to go on strike [and are required] to cross the picket line if you are not actually part of the union,” she said. “During [the strike], we made sure that schools were safe and that we had adults there to support the kids. I did everything from working with kids to sitting and helping principals plan what they were going to do.”

Yet Stone expressed that she and others are often treated as the villains in situations such as this one. In an interview with the Urban Legend, she said, “I’m in an odd position because I fully support the need to pay teachers what they deserve and create better conditions for the work that they do so that the kids can get the highest quality of education. The kind of education that you get at Urban is what all of our kids should have. When you are in a position like mine,” she said, “when you are seen as the bad guy, it’s challenging because at the end of the day my heart is with the teachers. I was a teacher, I believe in teachers and this is all in service of creating an experience for kids that is successful and positive.”