The disappearing sounds of Haight Street: the closing of the Haight Ashbury Music Center 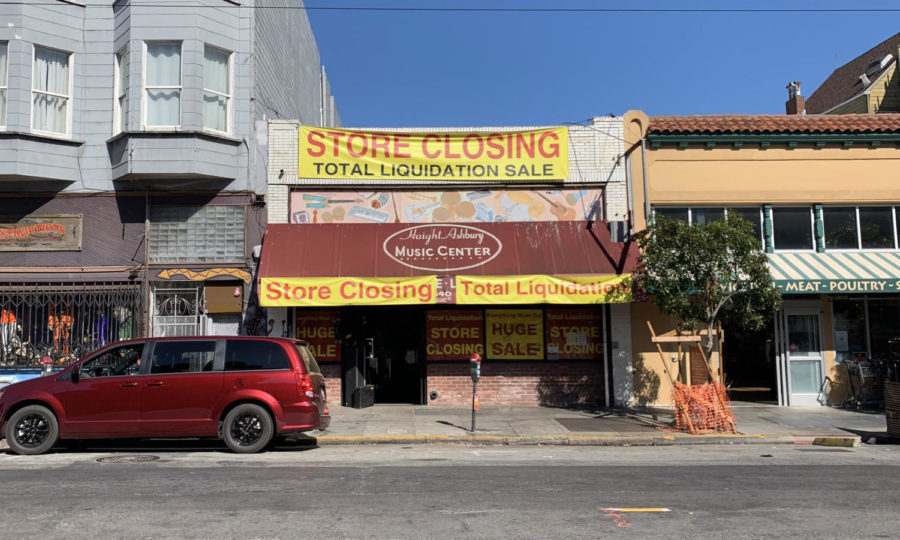 For the past 47 years, the Haight Ashbury Music Center, which neighbors Gus’s Community Market, has had a constant stream of musicians walking into the store and performing outside of it. However, the most noticeable feature of the store in the past few months has not been these sidewalk performances, but rather the bright yellow “total liquidation” signs that decorate the entrance of the store. After providing Haight Street with all of its instrumental needs, the Haight Street Music Center is set to close on Oct. 29.

The Haight Ashbury Music Center was originally opened by Rodney Albin, the brother of Janis Joplin’s bassist, in 1972. The store’s original name was Acoustic Music and was located at 1400 Haight Street, about two blocks from its current location on Haight Street between Ashbury and Clayton. The store was then bought by music producer Leib Ostrow in 1976 and renamed Chickens That Sing Music.

The current owner, Massoud Badakhshan, bought the store in 1980 and renamed it the Haight Ashbury Music Center. “In 1969, I hitchhiked from Iran to come to Haight Street, but I never thought I was going to have a music store or any business here,”  Badakhshan said. “I went to the Berklee College of Music in Boston, but I came back [after graduating] and lived literally on Page and Masonic. I came [to Chickens That Sing Music] to buy a single bass string and they were looking for a working partner, so I ended up buying the store and worked to make it what it is.”

In 1984, Badakhshan moved the store to where it is now. “I just worked and worked and worked and made it into the institution it now is. There are a lot of famous musicians who walked through this store, and I met my heroes in this store because there is only one Haight Ashbury Music Center.” The list of famous musicians who visited the store includes Carlos Santana, Cyndi Lauper, and Mickey Hart from the Grateful Dead.

This October, however, will mark the end to this long legacy of Haight Street music performances, since Badakhshan has had trouble maintaining the store in recent years. “It came to the point where I did not make any money for the past five years,” Badakhshan said. “I think I served the community pretty well for the last 40 years. And, looking at it, that’s 60% of my life, but I still want to live a life where I can spend time with my family and work a little less and hopefully maybe get a paycheck.”

“Haight Ashbury Music Center is my life; the biggest portion of my life was here,” said Badakhshan. I lived in the back of [the original Haight Ashbury Music store], which was directly behind the Urban School. There was a deck back there where the students would talk, [so] I heard all the gossip,” Badakhshan said jokingly. “I have not been here as long as Urban has, but I am just right behind them. I am the little brother, and hopefully when I ask them to let my kid in they will say okay.”

The closing of Haight Street Music Center, however, does not mark the end of  Badakhshan’s career. “ We are still going to have a Haight Ashbury Music Center online business, which is already pretty successful for us, and just shift from there. I also have another store in downtown Redwood City that’s called Gelb Music, which is going to enjoy its 80th birthday in November. I bought that store four and a half years ago from a friend of mine, and since we own the property, our rent is not going to go up.”

A rise in rent on Haight street is not a new issue. The Haight Ashbury Free Clinic, which has provided patients with free medical care since 1967, closed this past July.

“We’re unfortunately not going to get our break now,” said Jonathan Shifflett, the guitar and fiddle player for Echo Mountain, laughing. The historic location of the Haight Ashbury Music Center has always seemed to have a special calling to musicians, making it especially hard to say goodbye to the store. “I always feel like when people are walking by they’re waiting to hear music,” Shifflett said.