ADEM elections: why you don’t know about them, and what you need to know 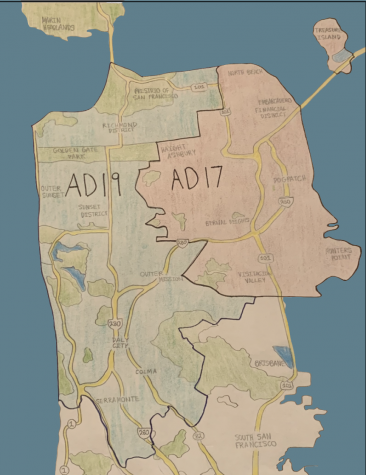 In the predominantly democratic Bay Area, the official Presidential Inauguration of Joe Biden on Jan. 20, 2021 came as a sigh of relief. According to The Washington Post, the 2020 Presidential Election saw the highest voter turnout in 120 years, with 66.3% of eligible voters sending in ballots. It’s difficult, however, to attribute this increase in voter turnout to just one source. To some voters, strong resentment toward the Trump presidency prompted them to vote blue, while other people may attribute it to convenience, given the flexibility of mail-in ballots. Whatever the reasons may be, the ADEM (Assembly District Election Meeting) elections have seen a similar increase in voter turnout.

When people vote in the ADEM elections, they are electing delegates to the Democratic State Central Committee (DSCC). The delegates are tasked with deciding who and what the California Democratic Party endorses and supports. They vote to endorse officials, propositions, and issues that affect the party platform. Delegates are important because registered Democrats tend to vote for what the party endorses.

In the past, the ADEM elections have been monopolized by people who want to keep power centralized among a select few. Because of the switch to mail-in ballots, or maybe because of the dire need for change in California counties, the ADEM website has reported a record number of voters. As of October 2020, there were 10,170,317 registered Democrats in California and 169,743 of those eligible voters requested a ballot in the 2021 ADEM elections; around 1.6%. In Assembly District (AD) 17, which represents roughly half of San Francisco’s population (around 441,800 people), 6,717 requested ballots. In Assembly District 19, which also represents around 441,800 people, 4,728 ballots were requested. The split between AD 17 and 19 is not exact, and does not account for the density of certain regions of the city or the fact that the approximate 883,600 residents are not all eligible to vote or are registered Democrats. Despite that, the number of people requesting ballots and voting is still persistently low.

Lanier Coles, who ran as a member of the City For All slate in Assembly District 19, offered one perspective on the transition away from in-person voting for the 2021 elections, saying that “by making [the ballot] a request, it feels like it’s further self-selecting people that are highly motivated to influence politics.”

Joshua Ochoa, who ran as a member of the Progressive Alliance slate in Assembly District 19, said, “this year I think there’s something like over 300,000 registered Democrats who signed up to vote in this election, and that seems like a really good thing, especially if it’s ‘record breaking’, but then you compare it to the fact that we have 10 million registered Democrats in California. It’s like, whoa, whoa, what is going on here.”

All registered Democrats can vote in the ADEM elections in their respective Assembly Districts, and can run once they are of legal voting age. In past years, the voter turnout has been low because of the lack of transparency and publicization about the ADEMs. However, the ambiguity surrounding these elections seems to be strategic.

Dr. Matthew Rhoa, who ran alongside Coles on the City For All slate, said that the majority of past voters and delegates have been “political insiders and loyalists to politicians [who] say, you scratch my back I’ll scratch yours.”

Calvin Quick, who is a student at the University of California, Berkeley and ran as a progressive individual representing AD 17, said that “traditionally the party doesn’t want people to know about it… because that way it’s easier to control your voting universe.”

In past years, the elected delegate seats have often been filled by slates that were put together by local politicians. Phil Ting, a Democrat representing Assembly District 19, and David Chiu, a Democrat representing Assembly District 17, have each endorsed slates for the 2021 ADEM election: Chiu endorsed the Rise Together slate, and Ting endorsed the Unity/Labor AD 19 Slate. As Liberman detailed out in his informational video about the basics of the ADEM elections, on top of the delegates that are elected democratically to the DSCC, all California democratic members of Congress, statewide officials, state legislators, and nominees are able to appoint up to six delegates of their choosing. This means that there could be up to 20 delegates serving whose endorsements are aligned closely with the values and views of Ting or Chiu, and therefore are not necessarily representative of the respective Assembly District as a whole.

This is not to say that the delegates endorsed by politicians are ineffective, or inadequate. It just means that the endorsements of those delegates reflect the beliefs and values of politicians that already have power, therefore furthering the lack of diverse representation in local government.

Quick similarly said that the ADEMs are often seen as “an inside baseball thing that is for the engaged party members.”

Marie Hurabiell, who was instrumental in putting together the City For All slate, said “these elections are a really interesting exercise for democracy… I think [the people who controlled the party] thought that the same thing that always happened would happen, which is that [they] would pick their slate, advance their slate, and that would be that. But this year we threw a wrench in the works.”

The 2021 ADEM election results are a testament to how disruptive that wrench can be. In District 19, the City For All slate took 13 of the 14 delegate seats, and in District 17, the Rise Together slate, endorsed by David Chiu, filled all 14 seats. There will always be room for progress, but the 2021 ADEM elections are paving the way for elections and candidates to come.