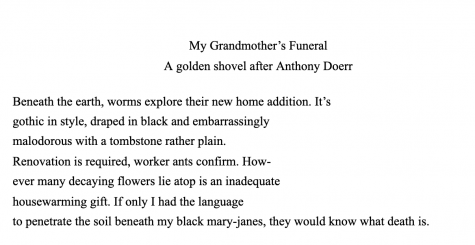 On March 25, 2021, the Urban community received news that three Urban students’ would soon have their work featured and published in the Marin Poetry Center High School Anthology 2021 alongside other young writers.

The Marin Poetry Center (MPC) holds an annual competition open to ninth to twelfth graders living in the San Francisco Bay Area, who submit up to three poems for consideration. The theme of Identity and Self-announced by the Marin Poetry Center helped guide writers’ creativity this year. A guest judge is invited every year, this year the center welcomed Lake County Poet Laureate Georgina Marie Guardado. Guardado was tasked with reading and picking the collection of stories that will be published in this year’s MPC High School Anthology. Out of the nearly 850 poems submitted, just 62 have been chosen to be published, including works by Talia Harrison ‘22, AJ Jolish ‘21, and Ellie Lerner ‘21.

In a series of articles, the Urban Legend wants to acknowledge the accomplishments of Harrison, Jolish, and Lerner, all of whom have found success in their creative endeavors.

Today, I, Sophia Gibson, spoke with Ellie Lerner about herself, her poetry, and the inspiration behind her award-winning poem, My Grandmother’s Funeral. The interview has been edited and condensed for clarity.

What was the inspiration for your poem?
“It was inspired by Anthony Doerr, who is one of my favorite authors. And the golden shovel [is a] specific type of poem, where you have a sentence, and then you take like the last word of every sentence of your poem should form that sentence from another author.

Why were you motivated to submit to the Marin Poetry Contest?
“I was in a creative writing class with Amanda, over the winter. And we just experimented with a bunch of different styles of poems. So that was the poem that I ended up submitting. And it was really fun to write in different kinds of forms.”

Were you nervous to submit to a competition?
“I submitted a short story to another publication, and they accepted it. So that kind of, I guess, boosted my confidence and encouraged me to submit to more things in general. So I’ve been submitting my writing to more journals, and highly, highly suggest that other Urban kids submit to contests in [publications] since there are just so many out there that take high school kids’ writings.”

Any advice for other Urban writers?
“I think people [Urban students] tend to write and do work kind of for the sake of doing work, which I think is great, but it’s also really nice to have that validation [of winning a contest].”