Has Biden followed through with key campaign promises? 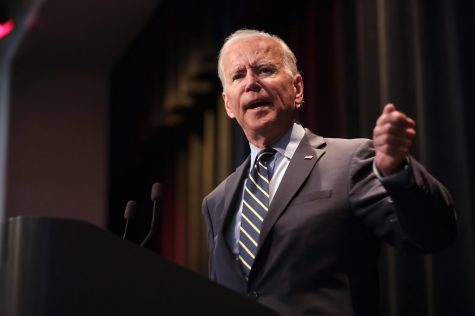 President Biden promised his first 100 days would be historic, but as the clock ticks down, where does he stand on key initiatives?

Along with the vaccine, President Biden also promised a swift second round of $2000 stimulus checks. After initially getting stuck in the Senate, Congress passed its second stimulus bill. The $1.9 trillion relief package called the American Rescue Plan Act included $1400 checks for all Americans that make under $75,000 a year. The plan was overwhelmingly popular with 70% of Americans supporting it, including 40% of Republican voters. However, not a single Republican senator voted in favor of the bill.

During his campaign, President Biden promised colossal measures to fight against the threat of climate change. Many of the executive orders within his first days as president did just that. Among those orders, President Biden reversed Trump-era climate policies and stopped the creation of the Keystone XL Pipeline. However, any action done through executive order could be undone by the next administration. In order to get permanent climate policies passed, President Biden would have to go through Congress where he would be likely to face strong pushback from congressional Republicans, especially from states whose economies rely heavily on the export of coal. Additionally, some Democratic senators, like Sen. Joe Manchin from West Virginia, are known to break party ties to defend coal production, making it unlikely that Congress will pass any legislation on climate change within the next two years.
In addition to his executive orders, President Biden has introduced one of the most ambitious infrastructure proposals in modern American history called the American Jobs Plan. The proposal, if signed into law, hopes to push the United States towards net zero emissions by 2050. The plan puts aside $174 billion to switch the country from gas-powered vehicles to electric ones. As well as money to install 500,000 electric vehicle charging stations across the country. The proposal reserves another $100 billion to update existing infrastructure like the country’s power grid in order to make it more robust and able to stand up to worsening natural disasters caused by climate change. Conservatives have feared that switching to renewable energy sources would destroy jobs in the coal and gas industries. In an effort to quell those fears, the plan proposes $16 billion to retrain workers who would lose their jobs so they can work in the renewable energy sector.

On the campaign trail, President Biden promised no deportations in his first 100 days in office in addition to sweeping immigration reform, reversing many Trump-era immigration policies. However, within his first 29 days, an estimated 26,248 people were deported, according to United We Dream, an advocacy group for immigrant’s rights. The actual number is hard to estimate because Immigration and Customs Enforcement (ICE) doesn’t publicly release the number of people they deport. Nonetheless, the number is likely substantial and certainly more than zero. The Biden administration, however, has proposed legislation that would offer a path to citizenship for the undocumented immigrants currently living within the United States.
President Biden has received criticism for using some of the same facilities to house minors crossing the border that President Trump created. The Trump administration was condemned for the inhumane conditions they kept immigrants in within these and many other facilities. Many social media posts have claimed that although these minors are being held in the same facilities, they are no longer referred to as ‘kids in cages’ but as ‘migrant overflow facilities.’ Though many of the same facilities are being used, the Biden administration is now using them to house unaccompanied minors coming to the United States, whereas the Trump administration drew criticism for implementing their policy of separating minors from their families with whom they had crossed the border.