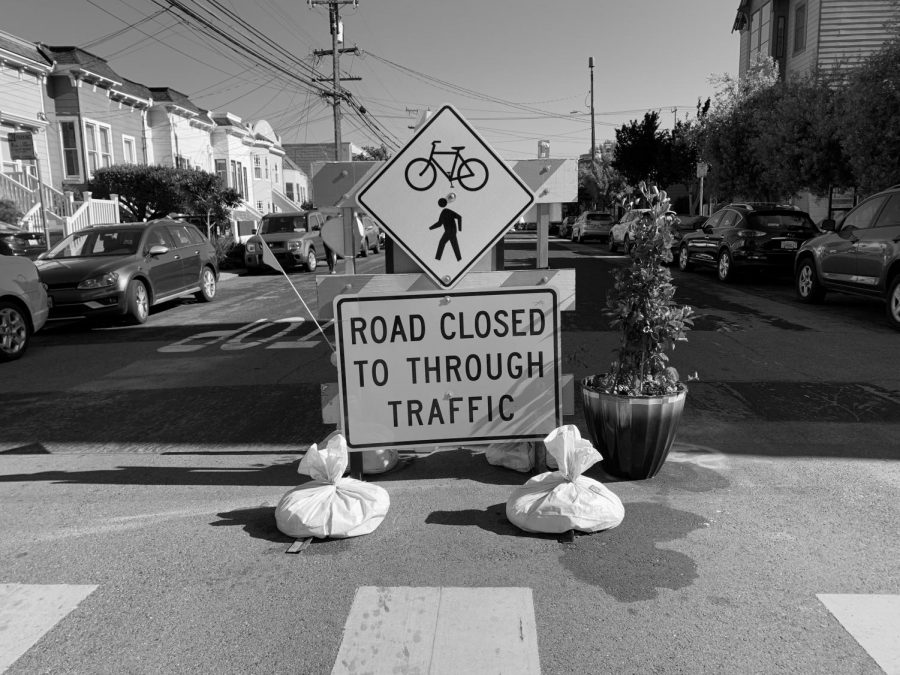 Page Street, used by Urban students as a gathering space after classes and an avenue for crossing between the Page and Oak Street buildings, has become a part of one of San Francisco’s newest initiatives: Slow Streets. Marked with temporary signs and cones that divert most traffic while still allowing some cars to pass through, the new state of Page Street has left some Urban students stunned by the newfound quiet.

Mayor London Breed announced this new initiative in April 2020, as the doors of businesses and schools were shuttered and the streets of San Francisco emptied. The goal of the Slow Streets program is to “reduce and slow vehicle traffic, supporting both public health and pedestrian safety,” according to a description put out by The Office of the Mayor.

The move came as Muni services were reduced and many residents were confined to other modes of transportation – walking, biking, and running, among others – as a result of the strict Purple Tier guidelines. By supporting social distancing and giving pedestrians access to the streets without the constant and disruptive presence of cars, the program creates an environment for community and activity during a sedentary and isolating pandemic.

Initially, Slow Streets were introduced on 4.5 miles of San Francisco streets, which was quickly increased to approximately 20 miles by mid-May and now sits around 45 miles a year later. One of the initial streets was Shotwell Street, located in the Mission District of San Francisco where Urban’s Director of Equity and Inclusion, Aku Ammah-Tagoe, lived before moving to another Slow Street in Oakland. “I lived there before [Shotwell] became a Slow Street, so I was able to watch it go from a super busy street with lots of people speeding to almost silent,” Ammah-Tagoe said in an interview with the Urban Legend. “You had to be really careful crossing the street or walking out of the house,” she continued. “It felt more dangerous.”

As the initiative expanded rapidly across the city, however, it became evident that many of San Francisco’s most densely populated and low-income neighborhoods – the Tenderloin, SoMa, and Chinatown, among others – had been left out of the program. Crowded long before the pandemic, these areas quickly became COVID-19 hotspots (the Tenderloin had the 2nd highest rate of confirmed cases in any SF neighborhood early in the pandemic).

The San Francisco Municipal Transportation Association had created a number of specific criteria for selecting Slow Streets – flat streets; ideally streets with four-way, stop-controlled intersections; streets free of conflicts with Muni, commercial loading, and emergency routes; and residential roads that span six to eight blocks with two lanes or fewer. “Low volume, residential streets,” according to the SFMTA’s website, are the program’s focus.

Unfortunately, as the SFMTA initially responded to complaints about the lack of Slow Streets in certain neighborhoods, implementing the program in congested, hilly, and/or multi-lane streets like those in the Tenderloin was much less do-able than in quiet residential areas. However, as residents of these areas continued to advocate for their communities, SFMTA began to roll out plans to expand the program to more low-income communities.

The Tenderloin Slow Streets plan, for example, is currently in the works. By providing a mix of block closures, parking lane closures, physical distancing lanes, and other methods, SFMTA seems to have found a balance between providing equitable spaces to all S.F. communities and acknowledging the importance of many Tenderloin streets for vehicular movement.

“I noticed there were a lot of naysayers in the beginning for a program that worked out pretty well once the city took the time to listen and try new things,” said Ammah-Tagoe, referring to the sharp and immediate backlash initially surrounding various aspects of the program, and the city’s response. “I think it’s bringing people together… I’ve started seeing a lot of random friends more because they’ve started running or riding their bikes. My block already had a strong sense of community but what [Slow Streets] meant was that [the community] could use more of the space,” she continued.

It’s a testament to the Slow Streets’ success that what began as a program aimed to provide relief during the COVID-19 pandemic will likely be sticking around after masks come off and social distancing measures are relaxed. As of April 23rd, Page Street, Shotwell, and Sanchez are all in the design phase for becoming permanent Slow Streets. A number of others are being evaluated for permanence.

With its many benefits, the Slow Street program has clearly garnered the support of Urban’s Head of School, Dan Miller, who wrote to the Urban Legend, saying “I am a strong supporter of the slow street movement, as it encourages people to walk or ride their bikes, it cuts down on noise and air pollution, and provides a sense of refuge from the stressors of traffic and congestion. Selfishly, we’d love to keep Page Street ‘slow’ to make it calmer and more conducive to school life.” And, with the city’s “Path to Permanent” process moving forward, it seems that Miller’s wish may be well on its way to coming true. 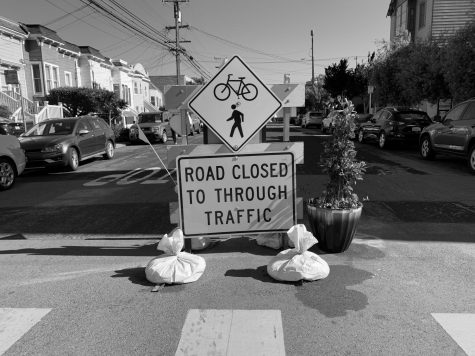