America has seen significant change since President Joe Biden was elected to office one year ago. At the time of the election, the first doses of the COVID-19 vaccine were being administered and former President Donald Trump vowed he would remain in office no matter the election’s outcome. As the end of Mr. Biden’s first year as president approaches, the nation’s support for him has significantly wavered. According to a recent NBC poll, it currently sits at 42%; less than half of the country supports the job he is doing. But does Urban, a notoriously liberal bubble within one of America’s most liberal regions, approve of the moderate Democrat? These results may surprise you.
General approval: 86.8%
According to an Urban Legend poll of 50 students, a whopping 86.8% of the Urban student body approve of Biden. This is significantly higher than the national average, however some of Biden’s specific policies are more divisive among the Blues. Many students believe that Biden is too conservative or too passive, with 70% of respondents saying he’s too conservative and 76% saying he’s too passive. Such issues with the President resulted in significant discrepancies between Biden’s overall approval at Urban and students’ approval of his specific policies. Though over 50% of students approve of each of the areas of policy shown below, each saw less of a majority than Biden’s overall approval at Urban.
Approval of environmental policy: 62%
Biden’s climate policies have been significantly more progressive than those of Trump. His agenda includes cutting the U.S.’s greenhouse gas emissions by 50% by 2030, which he claims is a monumental step forward in ensuring a livable future. However, as recent studies have proven, the U.S. must completely cut its emissions by 2030 in order to prevent a climate catastrophe. Biden’s target seems underwhelming for many, but it is certainly a step forward from the climate policies of his predecessor.
Approval of economic policy: 58%
Biden’s Build Back Better Framework is intended to rebuild the middle class and create millions of new jobs as a rebound from the COVID-19 pandemic. Though it is promising for many, it is being held up in Congress and significant cuts have already been made in the name of compromise.
Approval of foreign policy: 58%
General perception of Biden’s foreign policy mainly depends on whether people believe the withdrawal from Afghanistan was a good decision and whether it was well-executed. Though many seem to believe that the withdrawal was warranted, the execution left many Americans and allies stranded in a country in the hands of the Taliban.

Though the president’s approval from the Urban community is firmly above average, it may be surprising that some of his policies do not have the same overwhelming support. Based on this study, it appears that Urban generally supports Biden’s ideas, yet there exists much room for changes in opinion as his bills fight their way through Congress. 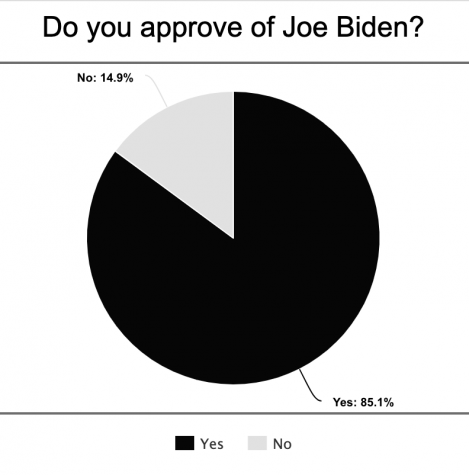