Humboldt Polytechnic: A bid for survival 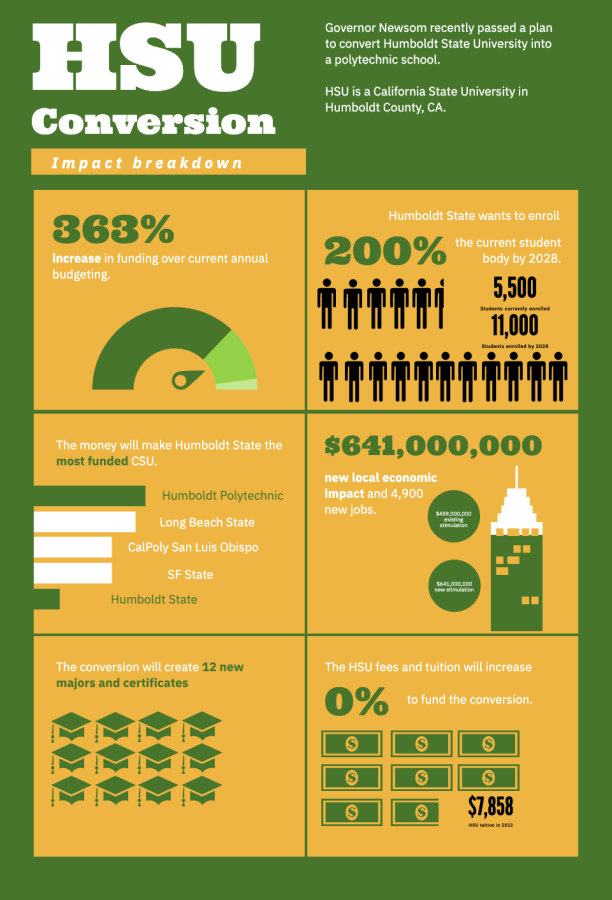 A compilation of statistics about HSU and its conversion. Infographic credit: Ezra Bergson-Michelson.

Humboldt State University will either increase attendance or shut down, there is no in-between. A financial and educational gem of the Northern California coast, Humboldt State is the largest educational institution and one of the largest employers for well over 100 miles in any direction of the school’s campus. Humboldt, Trinity, Mendocino, Del Norte and Siskiyou counties all draw significant financial benefits from the jobs in Arcata’s University District and college-educated workers by the school. As part of the California State University system, the school provides access to education for many who would otherwise not be able to afford a four-year college education. Humbolt’s yearly tuition is $7,858 (with a total cost of $24,850 for on campus students) and 78% of students are on financial aid. Even while underfunded, the school has offered top CSU programs in biology, botany, ornithology, ecology, forestry and—the first of its kind— a Tribal Forestry degree. Despite the massive importance of HSU economically and educationally, its enrollment fell by 61% between 2015 and 2020, putting the school in danger of shutting down.
The proposed solution is to convert HSU into a polytechnic. A polytechnic is an institution that specializes in STEM topics, typically through skill-based classes and vocational training. Currently, California State Polytechnic, Pomona and California State Polytechnic, San Luis Obispo—often called the CalPoly schools—are the only public polytechnic universities in the state. Though CSUs remain short on funding, CalPoly schools have historically been flush with cash and able to expand.

HSU President Tom Jackson Jr. discussed the vision for Humboldt Polytechnic when interviewed by the Humboldt Now student paper. “This historic investment [into the conversion] will be transformational for our institution, and it will revitalize this region for decades into the future,” said Jackson.

Local and state lawmakers have also approved of the conversion, as it both improves access to education and aids the financially depressed Northern California Coast. Democratic State Senator Mike McGuire approved of HSU’s new funding in an interview with the Sacramento Bee. “This is a game-changer for the North Coast,” said Sen. McGuire, who represents the Humboldt area.

State Assemblyman Jim Wood, also representing the Humboldt area, agreed on the vitality of the conversion to the financial wellbeing of the area. “This is potentially a huge shot in the arm for the area.”

As for the educational boost provided by the project, Provost and Vice President of Academic Affairs, Jen Capps, stated in an interview with the Bee that she believes that the conversion will help, but that HSU already provides quality services. “We’re already sort of a polytechnic without the designation,” said Capps.

Capps sees a vision of unified efforts to create an academic powerhouse. “The engagement and commitment by our campus community in our self-study process has been unprecedented and is a reflection of what we are truly capable of as an institution when faculty, staff, students and administration work together toward a common purpose,” said Capps.

With already existing specialties in environmental and earth sciences, Jackson hopes Humboldt Polytechnic can be a forward-facing institution. “Cal Poly Humboldt will be a polytechnic for the 21st-century, preparing students to address the urgent issues our society faces,” said Jackson in the HSU conversion press release.”

Humboldt’s isolated campus nestled among the redwoods far away from the urban networks of the Bay Area, Portland, and Sacramento belies the true impact the college has on the region, providing needed education and jobs. Democratic State Senator McGuire sees the switch as a remedy to part of a larger issue in American society. “One of the reasons why Donald Trump won for president is because Democrats across the United States forgot about rural America,” said McGuire.