Understanding what the leaked SCOTUS opinion means for Urban, California and the United States 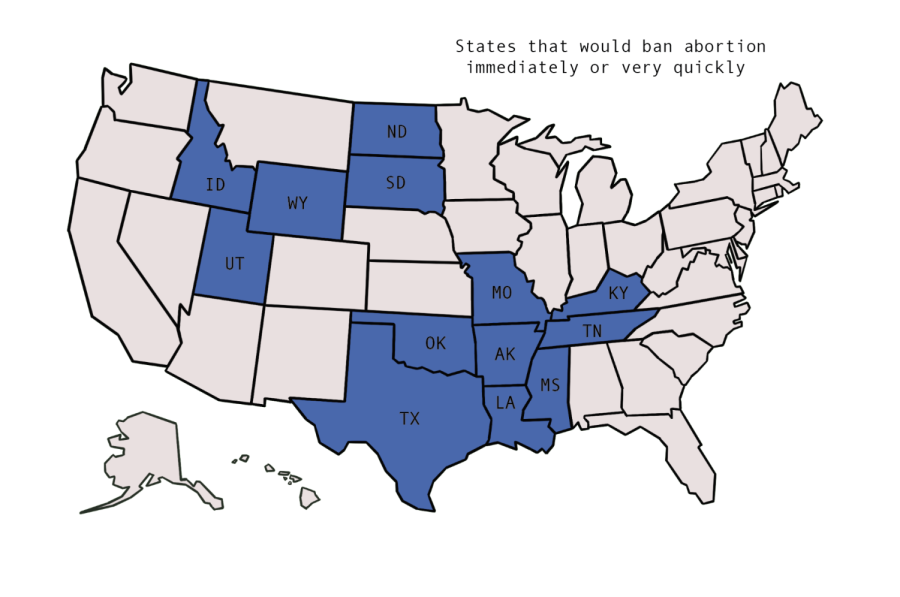 Read the whole article, or jump to a section.

What happened?
“We hold that Roe and Casey must be overruled,” wrote Supreme Court Justice Samuel Alito in a majority opinion leaked to Politico on May 2nd, 2022.

The leaked opinion is the Supreme Court’s decision in the Dobbs v. Jackson Women’s Health Organization case— ruling over the constitutionality of a Mississippi abortion law that attempts to ban most abortions after 15 weeks. In determining said constitutionality, most justices decided, at least after hearing arguments earlier this year, to overturn the landmark 1973 Roe v. Wade case and the 1992 Planned Parenthood v. Casey case, eliminating any federal protection of the right to an abortion.

The Supreme Court’s final decision is expected to be released in June or July of this year. In an immediate press release, The Court confirmed the document to be authentic while also emphasizing that the draft is unofficial and may not reflect its final position. However possible, it is not seeming very likely that Alito will lose his five-justice majority. The release also mentioned an investigation has been launched to identify the source of the leak.
Background:
For now, Roe and Casey are still governing precedent. Roe, very simply put, argues that the due process clause of the 14th Amendment protects women’s privacy and that the right to abortion falls within that right to privacy. Roe argues that although the state has a legitimate interest in protecting the health of pregnant women as well as the “potentiality of human life,” a state may not pass a law that broadly prohibits abortion without considering the stage of pregnancy.

The Casey decision is the current standard for determining if an abortion law is constitutional. This decision upheld Roe but created the “undue burden” test, which held that a state’s abortion regulations may not impose a “substantial obstacle in the path of a woman seeking an abortion before the fetus attains viability.”
Justice Alito’s reasoning:

The 14th Amendment states that “No State shall make or enforce any law which shall abridge the privileges or immunities of citizens of the United States; nor shall any State deprive any person of life, liberty, or property, without due process of law.” The core of Roe and Casey relies heavily on an interpretation of the 14th Amendment’s reference to “liberty” to include a right to privacy and personal body autonomy.

Alito justifies his opinion in favor of overturning Roe and Casey because he believes that the 14th amendment’s reference to “liberty,” a large part of the Casey decision particularly, is too broad to grant a specific right.

Further, Alito believes that to apply the 14th Amendment, a due process claim must be “deeply rooted in this Nation’s history and tradition,” which he does not see the right to abortion as.

He also objects to Roe’s vague constitutional roots, citing its reliance on the First Amendment (free expression), Fourth Amendment (protection from unreasonable searches and seizures), Fifth Amendment (the government cannot compel an individual to reveal incriminating information about themselves), and the Ninth Amendment (American’s rights are not limited to those explicitly stated in the constitution).

Alito also claims that stare decisis, a legal doctrine that states The Supreme Court should not overturn past decisions unless in exceptional circumstances, was the primary reason Casey still upheld Roe.

The effect on individual states:

If federal protection for abortion is no longer, individual states will get to determine their abortion laws. The New York Times has reported that 13 states would ban abortion immediately or very quickly and that five states have pre-Roe abortion bans that could be re-enforced. 14 states have the possibility to restrict abortion to 22 weeks or earlier. California, unsurprisingly, is not one of these states.

Upon the news of the majority opinion, California Governor Gavin Newsom made a statement promising to further cement abortion protections into state law. “California will not sit back. We are going to fight like hell,” he said.

Just hours after the leak, Newsom and a few Democratic state legislators announced a plan to introduce a California constitutional amendment to solidify the right to access an abortion for Californians— and to accommodate an up to 3000% increase in people traveling to California to seek abortions if Roe and Casey are overturned. For a constitutional amendment to pass, ⅔ of lawmakers in the State Assembly and Senate as well as a majority of voters must approve the amendment.

Upon the draft’s leakage, San Franciscans gathered outside the SF’s Phillip Burton Federal Building. This protest —  one among many throughout the country — exemplifies the frustration at the prospect of a future without the federal protection of abortion rights that Americans have lived with for half a century.

“I think [my] number one reaction was angry and a scared about what [it] means to put the decision of whether abortion is legal or not into the hands of lower levels of government,” said Scarlett Hollenbeck ‘23.

The Urban community is struggling to contend with their privilege as residents of a state like California, while many in other states may lose their right to abortion. “Personally, I’m really protected and I’ve tried to keep that in mind when I think about what it would be like to be a high school student planning on going to college across the country,” said Gong.

Students for Women’s Equality and Rights (SWEAR) Co-leader Anna Masto ‘22 points out how socio-economic disparities will be furthered by overturning Roe v. Wade. “This issue doesn’t necessarily directly impact a lot of the female-bodied people at this school because there are a lot of upper-class people who go here who could get safe abortions if they were in one of the states that [the right to an abortion would be in] in jeopardy in.” The New York Times has reported that in 2014, half of the people who got abortions were living in poverty. It would be much harder for those living in poverty to travel to get an abortion.

Masto cautions Urban not to let this privilege allow them to withdraw from the discussion. “I think creating more conversation around it…will get people [angrier] and more likely to donate or go to protests or actually do something about it,” said Masto.

Some are finding hope in the belief that losing the already weakened Roe v. Wade will mobilize people to fight for both the lower levels of government and the federal government to protect abortion rights through legislation. “Folks need to get on a campaign to advocate for amending the Constitution,” said Gong.

Biden & non-SCOTUS methods of protecting the right to abortion:

In a statement released soon after Justice Alito’s opinion was leaked, President Biden wrote, “If the Court does overturn Roe, it will fall on our nation’s elected officials at all levels of government to protect a woman’s right to choose. And it will fall on voters to elect pro-choice officials this November. At the federal level, we will need more pro-choice Senators and a pro-choice majority in the House to adopt legislation that codifies Roe, which I will work to pass and sign into law.”

Since the mandate of The Supreme Court is to interpret and uphold our nation’s laws and constitution, if the federal constitution is amended, a process requiring a ⅔ majority in both houses of Congress and ratification by ¾ of states or a federal statute (like The Voting Rights Act) is passed with a majority in both houses, the Court would be required to uphold that right.

The Senate voted on The Women’s Health Protection Act, a Democratic led-bill that would effectively codify the right to abortion, on Wednesday, May 11th. The bill failed to get the 60 votes necessary to overcome a filibuster in the Senate, ending with 49 votes for it and 51 votes against it.

Now, with the Roe and Casey precedents at risk of being overturned, some are fearing for other rights. While Alito wrote in his opinion that “nothing in this opinion should be understood to cast doubt on precedents that do not concern abortion,” legal scholars and citizens alike are skeptical.

As Service Learning and Constitutional Law teacher Kristjiana Gong said, “whether or not you are somebody who is passionate about reproductive rights, I don’t know a lot of people who aren’t passionate about privacy in some regard.” 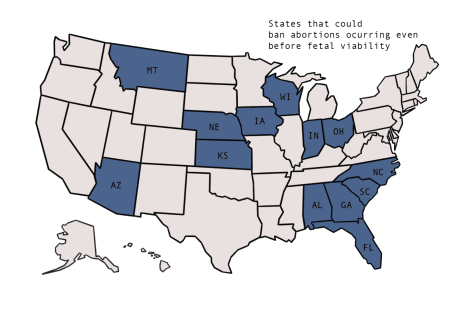