One week into the Derek Chauvin trial: “who holds justice and how is justice shaped?” 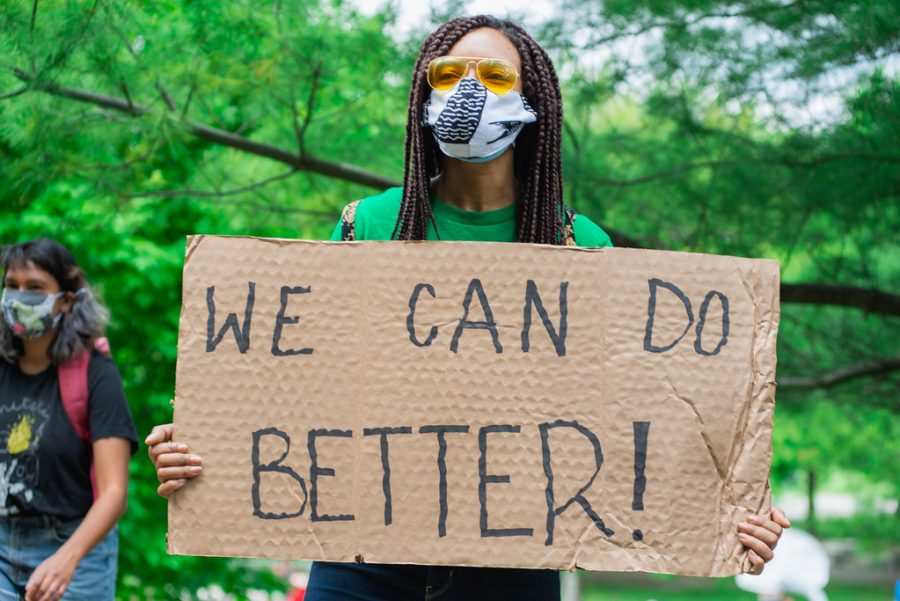 "We Can Do Better Protest Sign Cardboard - Justice For Regis - Not Another Black Life rally and March - May 30, 2020 - Creative Commons Photos Here Later Today - Toronto Christie Pitts Park down Bloor Street to Queens Park / Police Headquarters on College" by Jason Hargrove is licensed under CC BY 2.0

The trial of Derek Chauvin, a former police officer charged with brutally killing George Floyd, has been in session for just over one week. The week ended with a testimony from the Minneapolis Police Department’s most senior officer, Lieutenant Richard Zimmerman, who called Chauvin’s actions “totally unnecessary.” Additionally, the public has learned that Chauvin kneeled on Floyd for 9 minutes and 29 seconds, instead of the previously believed time of 8 minutes and 46 seconds. Chauvin has pled not guilty to second-degree unintentional murder, third-degree murder, and second-degree manslaughter.
For Aku Ammah-Tagoe, Dean of Equity and Inclusion at the Urban School, the trial is raising “the question of who holds justice and how justice is shaped.” She finds herself reminded of the novel Native Son by Richard Wright, which she says, “shows and comments on the way that black people’s lives and bodies are so judged in ways that are not about the jury in a courtroom, and are not about the prosecutor or the defense attorney. It’s really about the ways that society decides, long before you get to a courtroom, who you are, and what your actions mean.” She continues, “When I think about justice, I don’t think of the courtroom as the place where it happens.”
Ellie Howell ‘22 says that real justice can only come when “we root out systemic racism.” She is “emailing and writing letters to congress, and [other] lawmakers” while awaiting the outcome of the Floyd trial. Even if Chauvin is convicted, Howell believes “stuff like this will just keep on happening if we don’t change the system.”
Systemic racism is present in “our society’s narratives about black people’s bodies.” says Ammah-Tagoe. The conversation around George Floyd’s tolerance for opioids “[is] so hard to read about that, knowing that a lot of Americans will read that and think, oh, drug user, deserved whatever he got.” She continues, “I’m more interested in changing how people perceive drug use in our society, I’m more interested in changing how people perceive other people’s bodies in our society. What counts as a dangerous body? What counts as a safe body? What are we afraid of? What are we not afraid of? When do we try to use force against one another, to restrain each other?… I want to focus my energy in life is changing those narratives where judgment happens.”
Watching the trial “has just been super emotional,” said Howell. She says she has only “had one teacher bring up [the trial],” she continues that “it would’ve been nice to have more teachers bring it up” to feel more supported. Howell had hoped for more acknowledgment from the Urban community specifically about the Chauvin trial, and its effects on BIPOC in the Urban community. Witnessing the trial is especially difficult during virtual school, where Howell says, “talking about heavy subjects like this doesn’t work that well [because] we feel awkward.”
In an interview with Del Seymour, founder of Code Tenderloin, he says with regards to the trial occurring amidst an increased awareness towards AAPI hate, “we need to come to some solidarity” across communities. He adds that “we can never depend on the hierarchy of the police department,” and because of this, it is important to look outside of the police department for structural change. Specifically, Seymour mentions speaking to the San Francisco District Attorney to ensure that the police are being held accountable.
Ammah-Tagoe says in regards to watching the trial, “My advice to students of color would be don’t spend a lot of time taking in images that make you feel bad, or following narratives that make you feel worse, it’s really important to protect some part of your soul.”
For white students, “centering relationships is really important. Too often, we wait until something traumatic happens, and then we show up and say, How can I help?” says Ammah-Tagoe. “It really helps if people already know you well enough, and have the relationships with you, that they can show up to support you, without having to ask, what do you need? You have to think about your relationships, figure out what people really need just to make their lives feel whole. And then try to put yourself in a position of offering that, so you’re not creating the additional burden after the fact of saying what do you need?”
Solidarity also means being educated on whose narrative is told. Ammah-Tagoe says, “Read critically, [and] think about where you’re getting your information.” For white students and allies, it is critical to rethink their relationship with the media. “Are they sources that repeat the same narratives of pathologizing blackness in America? And if so, actively search for new sources. Be careful about what you recirculate, are you sharing news stories and images, because it’s genuinely helpful, or just to do so and demonstrate your own awareness. Media is not a one-way relationship think about what you put into the world and how you might start putting more accurate and better information into the world.”