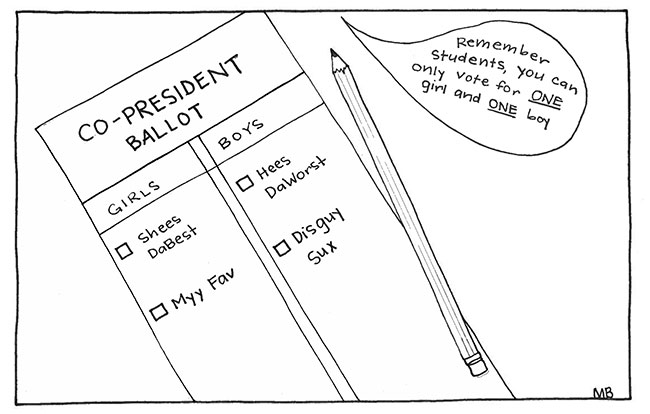 The voter survey we’re sent asks us to choose our favorite girl and favorite boy for a leadership position. But what if we don’t want a boy and a girl? What if the male candidates aren’t strong enough to compete with the females? Why can’t we choose two boys or two girls?

Our ability to elect who we truly want for co-president is smothered by Urban’s need to let everyone — students, prospective students, and parents alike — know that we support gender equality. Yet if we elect two girls or two guys as co-presidents, it’s not because we’re sexist or they don’t believe in Urban’s message, even though for some that might be the case. It’s because they want a pair that will support their ideals.

If co-presidents represent the student body, why not let students choose who they want? The point of electing a boy and a girl is to ensure two different perspectives, but in an environment as inclusive as Urban, the election should make sure the students have the two best candidates, regardless of their sex.

Urban doesn’t need to force students to vote for one girl and one boy to make sure everyone is being represented. That happens by allowing everyone to vote. If Hillary Clinton runs for president in 2016, would we require her to run with a male vice-president or even a black male president? No, and the same logic applies at Urban. We should let the students decide what is best for them instead of deciding for them.

What’s more, Urban is forcing its students to succumb to a binary understanding of gender. How can we require freshmen to take Identity and Ethnic Studies, where they are repeatedly told that gender is a social construction, and at the same time demand them to check a box saying male or female to run for student committee? By forcing students to vote for one boy and one girl we are reinforcing the same misconception of gender we are fighting so hard to discredit.

We deserve to elect two students who reflect our interests — regardless of gender.