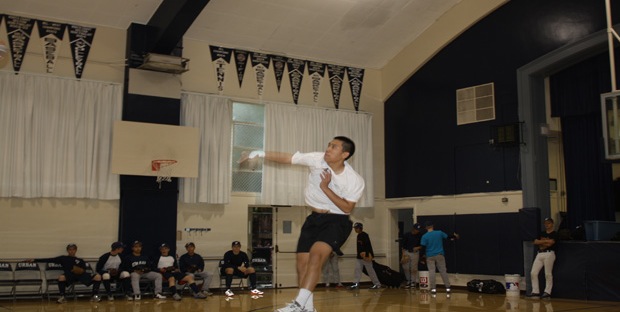 A roar of applause echoed in St. Agnes Gym on May 21 as parents, teachers and students celebrated the naming of Danielle Shorenstein (’12) and Evan Chang (’12) as the 2011-2012 athletes of the year. Spanish teacher and varsity soccer coach Antony Reyes recited his favorite memories of the pair, who led their teams to successful seasons and who both captured spots on the Bay Counties League (BCL) West all-league teams. Shorenstein also received the Most Valuable Player for girls soccer and girls volleyball, and Chang was named the MVP of boys soccer.

The banquet started off with a pizza dinner and was followed by a lengthy awards ceremony, in which a MVP, Most Improved, and Coach’s Choice award was given out for each sport. The LeRoy Votto Award, given to students who play 12 seasons of sports, was shared by Alex Wu (’12) and Lindsey Milgrom (’12).

To close out the night, students were treated to a video presentation of each senior athlete’s favorite moments in their sports career.

Earlier in the evening, Athletic Director Greg Angilly spoke about both Urban’s accomplishments and the school’s failures, saying that Urban could win many more championships, but that the time commitment could take away from other Urban activities, such as arts and academics, and that such competition would cost what makes Urban special.

“I wouldn’t trade a single one of you for a banner,” Angilly said proudly.