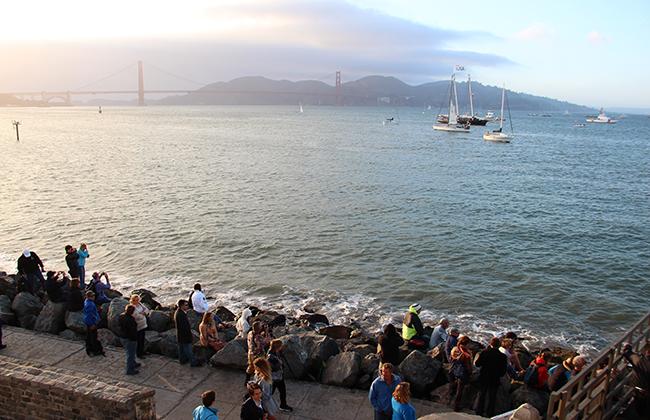 Diehard sailing fans and curious locals flocked to the shores of San Francisco’s Marina on Oct. 4 to watch the America’s Cup fleet race finals, which were held each day from Oct. 2 to Oct. 7.

“I enjoy this because these sailors here are at their best,” said Andrew Pejack, 44, who is a sailor and the captain of his ship, The Swan. “It really is serious business out here, and that’s what I like about sailing, there’s no BS. You really got to know what you are doing. There’s no screwing around, but it is a lot of fun. It brings out the best in people.”

Pejack, who has followed sailing his whole life, said he has been looking forward to the America’s Cup taking place in San Francisco Bay ever since it was officially announced on Dec. 31, 2010.

The shores of the Marina were also packed with people who were new to the sport of sailing.

“My wife dragged me here,” said Barr Bauer, 52, a San Francisco native who does not follow sailing. “We sat down in the bleachers and we could keep track of what was going on with our all-important binoculars, and I really started to understand what they were doing.”

“Hopefully (Oracle’s success) inspires people,” said Pejack. “Inspires people to learn about the rich tradition that this country has (in sailing), and then when the big races come next year, people will get more interested in it.”

“I saw hockey flourish in California, so why not sailing?”